Kingsport Chamber of Commerce Dinner: Impressions of a First-Time Visitor

"I don't know what to expect. I'm nervous, but excited at the same time." 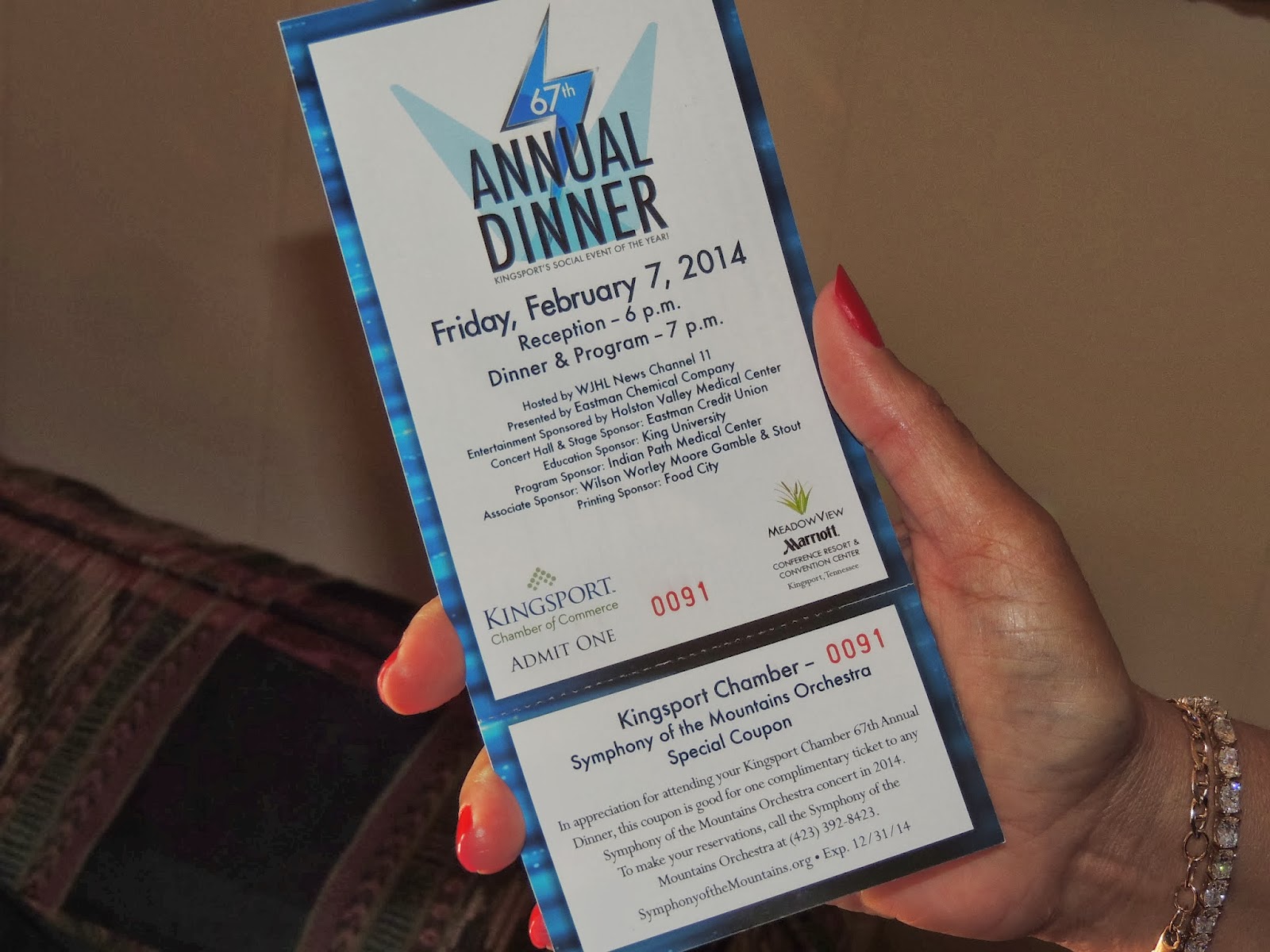 Riverview's Thelma Watterson has been waiting a year for the chance to attend what she says, has been hyped up as "the area's biggest social event of the year."

It's the Kingsport Chamber of Commerce's annual dinner.. and it's Ms. Watterson's first visit to something this big.

"I had planned to go last year," she says, "but something came up and although I had paid my $100 dollars, I wasn't able to go. I regretted that, because I heard that everybody had a nice time."

Thelma is a board member with the non-profit Sons and Daughters of Douglass Alumni Association in Kingsport. It was the second year that the agency had a table at "the biggest social event of the year." 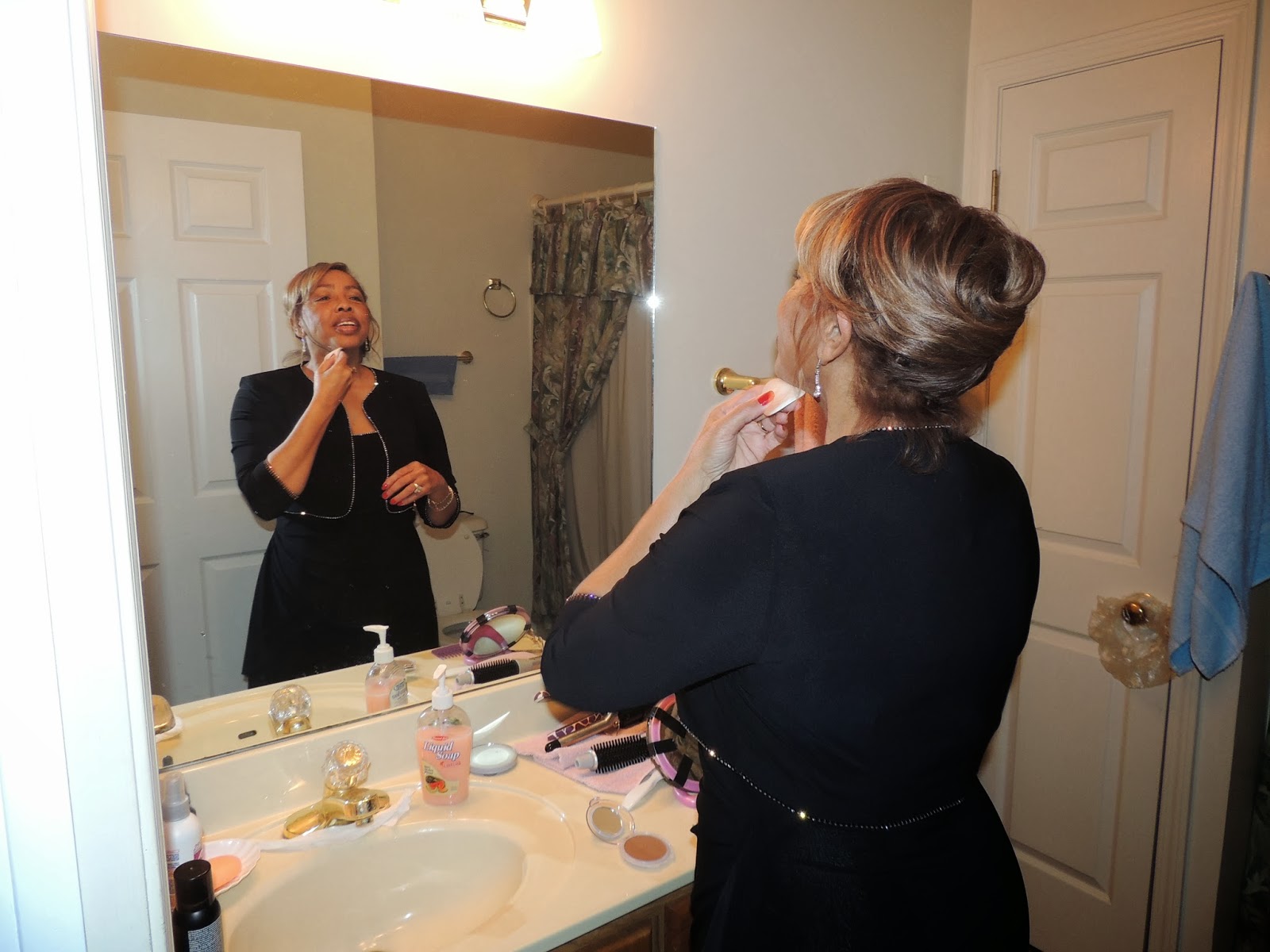 Because it was her first visit, she says, she spent an hour and a half just getting ready.

"You want to look your best, because you're representing the hundreds of members and descendants in the Sons and Daughters of Douglass Alumni Association. We're proud to represent them, at one of the most prestigious events around." 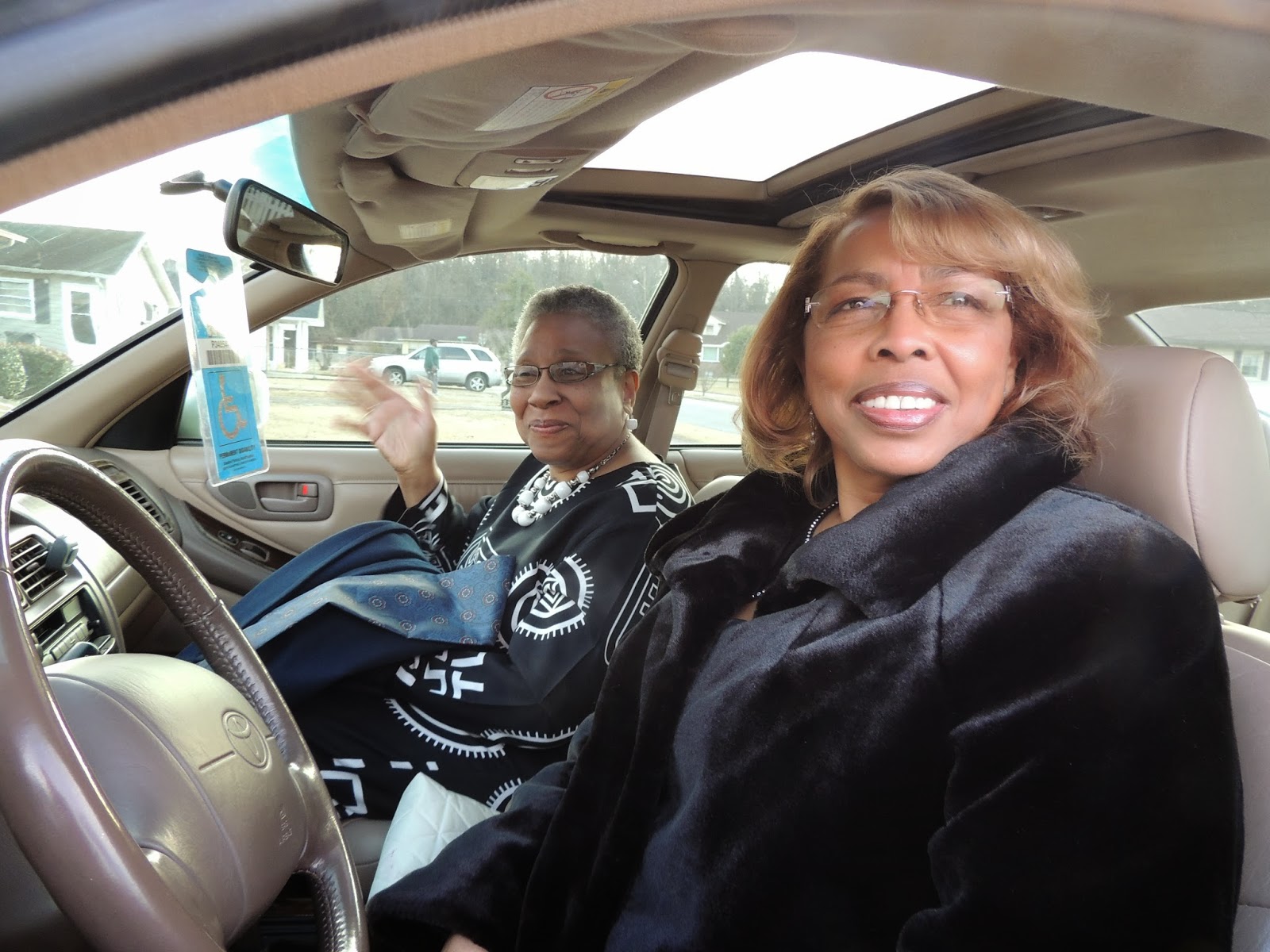 The nervousness and anticipation Ms. Watterson had, carried over to when she picked up another Douglass alumni board member, Andra Watterson.

"I guess we all have butterflies in our stomachs," she says. "Our non-profit group is a member of the Kingsport Chamber of Commerce and attending the dinner will benefit us as a group. You get to hob-knob with the rich, the affluent and the famous of Kingsport.. business owners and their employees, politicians, educators, bankers, doctors, lawyers. It's people that we see and read about in the newspaper and see on TV all the time, all gathered in one place."

"We feel privileged to be here," she says. "It's a chance for us to network. We need that. We get to talk to the movers and shakers in the area, with the dinner a big pep rally to promote Kingsport and the good things we've got in our city. We're members of the Chamber of Commerce and we are one of those good things in the community." 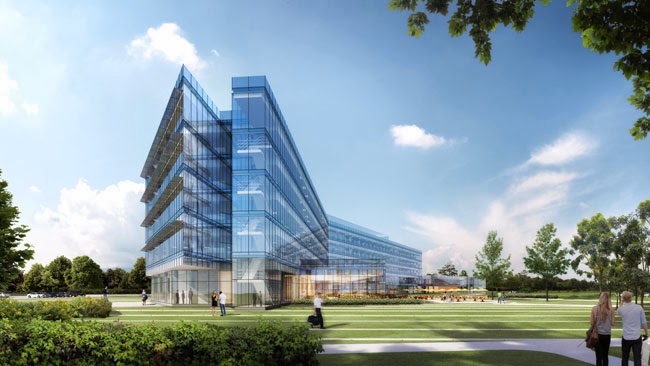 The 67th annual dinner celebrated several of the year's accomplishments, among them the groundbreaking for Project Inspire, Eastman Chemical's $1.6 billion dollar economic development investment, to be built in the Riverview neighborhood across Wilcox Drive from Eastman's headquarters.

"It's rather prestigious when you tell people that you live in a neighborhood that also holds the headquarters for a Fortune 500 company, one of the biggest industries in Tennessee and soon to host that company's world headquarters," says Douglass Releford, president of the Sons and Daughters of Douglass Alumni Association. "They could have built that anywhere, but they chose the Riverview neighorhood. I think they know the economic impact the decision will have on Kingsport and Tennessee in general, but I don't think they realized the economic impact it will have on Riverview. That means a lot of us who still live there, others who have emotional ties to it, and the Douglass alumni who still hold Riverview close to the heart. Eastman has, in several ways, been good for Riverview, and I think the company appreciates the good citizenship and camraderie of its next-door neighbors." 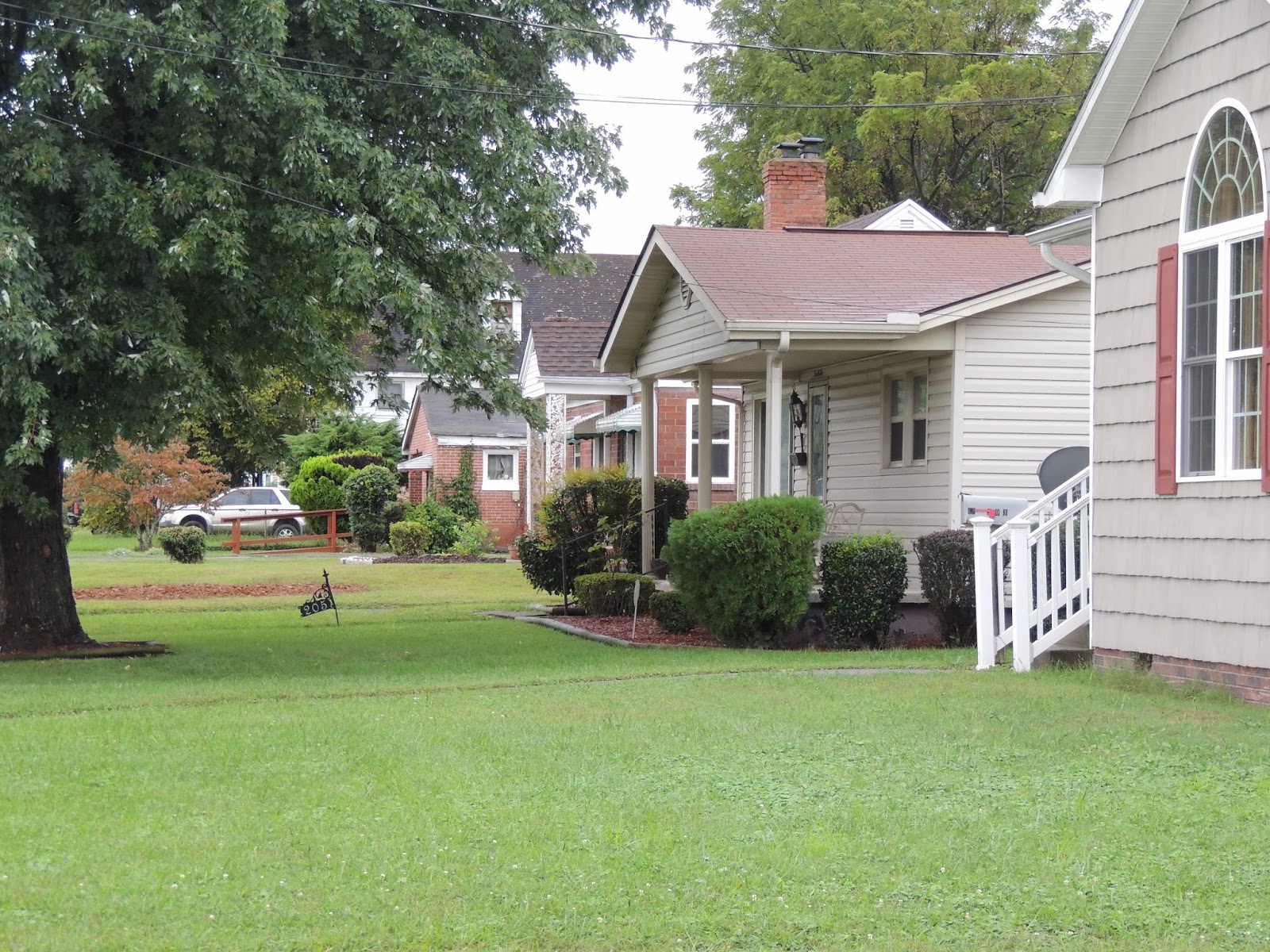 "Riverview is not the 'dead' community that it used to be," Releford continued. "It's a thriving, vibrant area with room to grow on either side of the railroad tracks. Its core residents are committed to good citizenship and harmony. I think it's a sign of respect that Eastman shows to Riverview to not only have their headquarters in our neighborhood, but that they think enough of us to have their world headquarters right across the street from us."


"We are proud of that in Riverview," he says. "Nobody else can claim that distinction."


Other Kingsport accomplishments touted at the Chamber dinner was the opening of the $26 million dollar Kingsport Aquatic Center... the groundbreaking for the $16 million dollar Welcome Center on I-26 south of the John B. Dennis Bypass... and the improvements to Kingsport's quality of life, including the city's new baseball-softball complex, to be built on General Shale's former property behind Dunbar Street, known to Riverview residents as "Clay Hill." 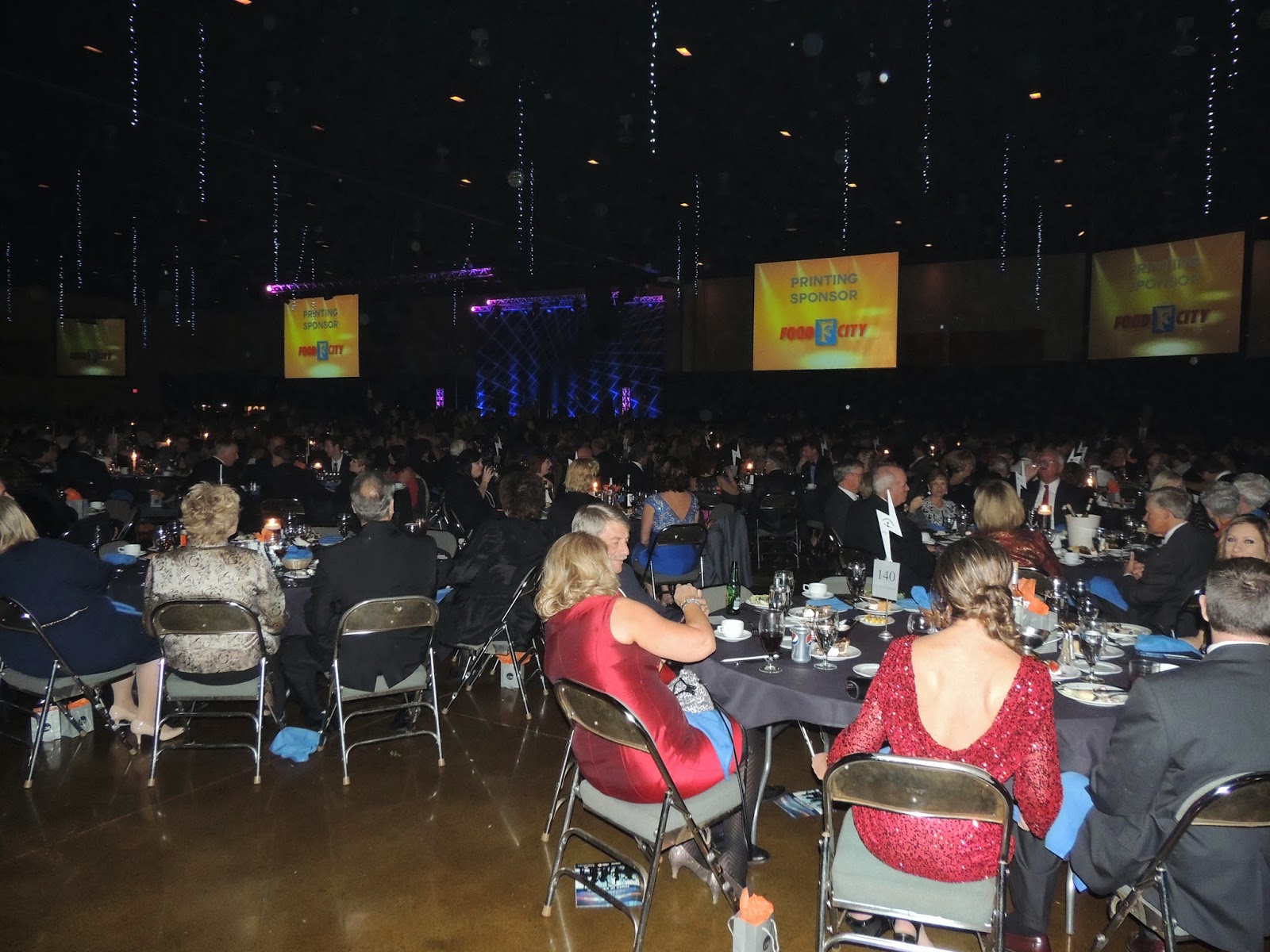 The Kingsport Chamber touts the event as the largest chamber of commerce gathering anywhere in the United States. More than 1,700 attendees, seated at more than 170 tables, completely filling the largest ballroom at the Meadowview Conference and Convention Center. There were more than 100 corporate sponsors. The event was sold out for months. 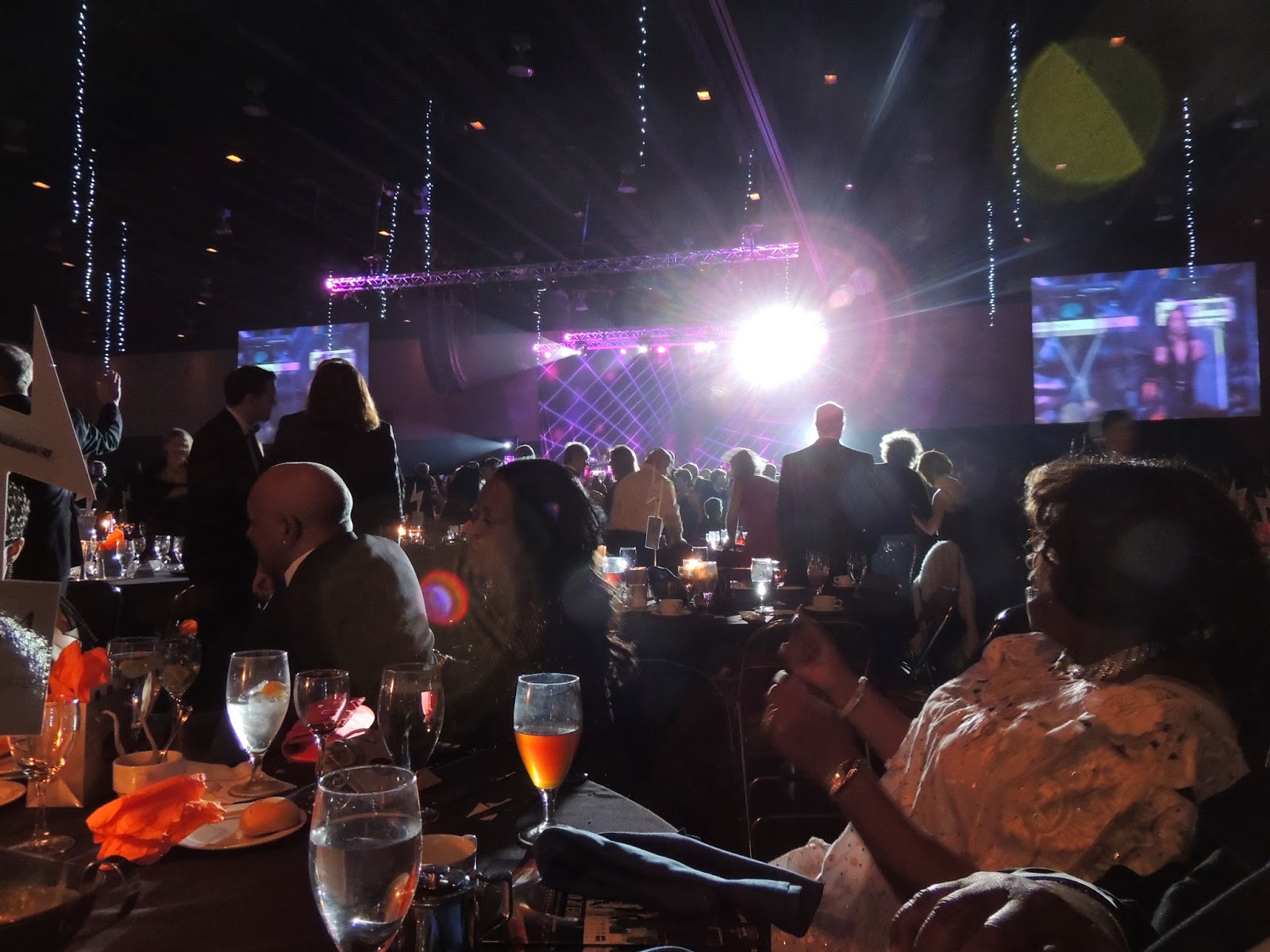 Among the chamber members present.. the non-profit Sons and Daughters of Douglass Alumni Association. Table #134.. one-third of the way inside the main ballroom doors and directly down from the main stage. Practically in the center of the room.


"I was excited to be caught up in the hustle and bustle of the moment," says Thelma Watterson. "There was a lot of traffic going by our table, stopping by to say hello. We got to see a lot of people, mingling and having a good time. It was a lot of fun, just what I expected."

"I think being a part of the Kingsport Chamber of Commerce means, we are letting the people know that we are, indeed, an important part of Kingsport," Releford says, "that we are doing good work in the city. We don't want people to forget that African-Americans have a storied history in Kingsport, probably more than those same communities in Johnson City and Bristol. We will continue being an important part of Kingsport, participating in activities, programs and events that promote our city, and that we don't want to be left out of them. We'll raise questions when we need to.. we'll celebrate the good times in our town, and we'll lend a shoulder to lean on in the bad times. That's what good citizenship is all about." 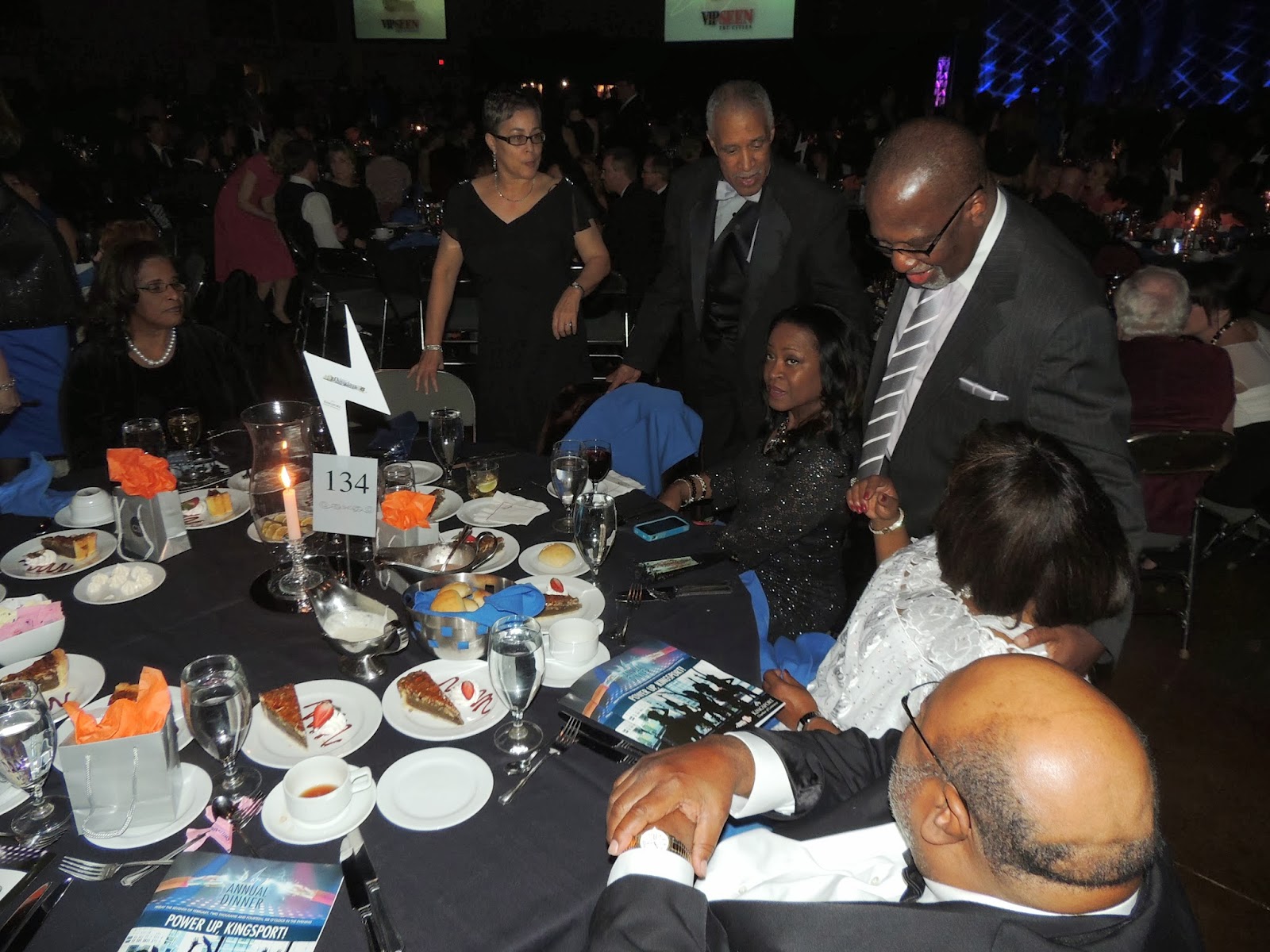 At the Douglass Alumni table were president Releford and his wife Vivian.. Alumni Board Vice President Louetta Hall... Vicki Smith, board secretary... Thelma Watterson, also board recording secretary... Andra Watterson, also board financial secretary... Wallace Ross, Jr., past board sergeant at arms... Calvin Sneed, permanent board member in charge of the alumni website and public relations... Linda Bly, alumni board member, and guests Greg and Nat Manes. Seated nearby at the Kingsport Housing and Redevelopment table were alumni board treasurer Sheila Leeper and New Vision Youth Director Johnnie Mae Swagerty. At the also nearby Eastman table were alumni board permanent member Van Dobbins, Jr. in charge of alumni food service and his wife Dr. Dorothy Dobbins, and also Paul Montgomery, V-P, Community Relations and Corporate Services at Eastman Chemical Company. 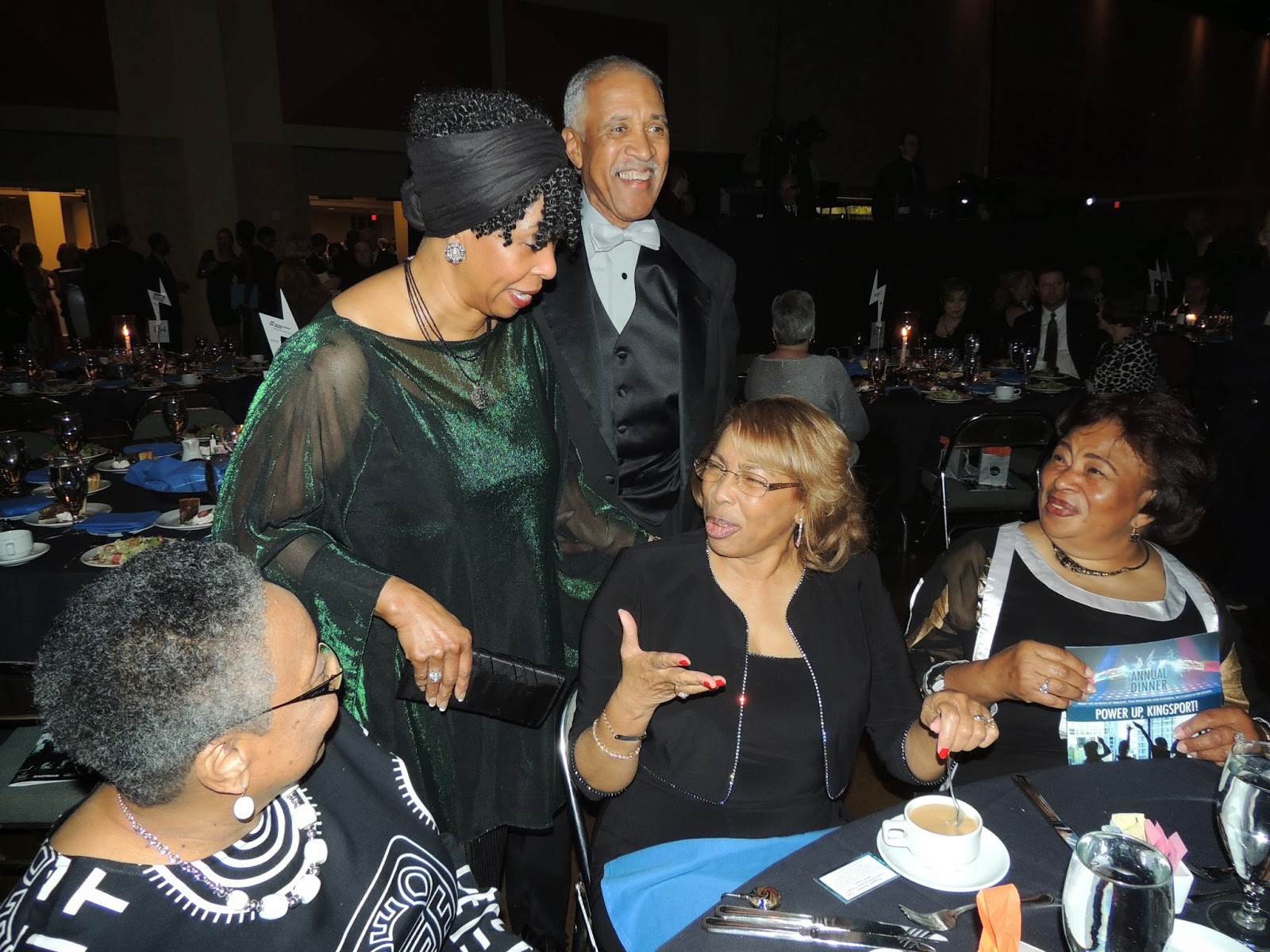 "What was good, was that there were Douglass alumni and descendants not just at our table," says Watterson. "We were scattered around the room, at big tables and small tables. That made me feel welcome. We are indeed part of the bigger community in many ways."

As the Chamber of Commerce gavel was passed from 2013 chair Monty McLaurin, the CEO of Indian Path Medical Center, to the 2014 incoming chair Andy Wampler, shareholder in the Kingsport law firm of Wilson, Worley, Moore, Gamble & Stout, Wampler told the gathering that "we have so much momentum occuring right now in the Kingsport community, and it promises to continue into this year as well." Later, for people who brought their dancing shoes, the musical band Jessie's Girls brought crowds to the dance floor in a total, non-stop dance-a-thon. The band featured 5 female dancers with strong vocals, a 4-piece band with horns, and two male party hosts. The crowd rocked into the Meadowview night.


"The ambiance was great," says Thelma Watterson on the way home after the gala. "The atmosphere was what I expected. For a non-profit organization like Douglass, it was good to have exposure like that."

"I heard that as soon as the dinner wrapped up, the Chamber started working on next year's event," says Releford. "As a group, the Sons and Daughters of Douglass Alumni is hoping to attend the program next year, those that are able, and if we can get the word out sooner, maybe have a larger table. It's a great event, and I think everybody, including us, is planning on being there." 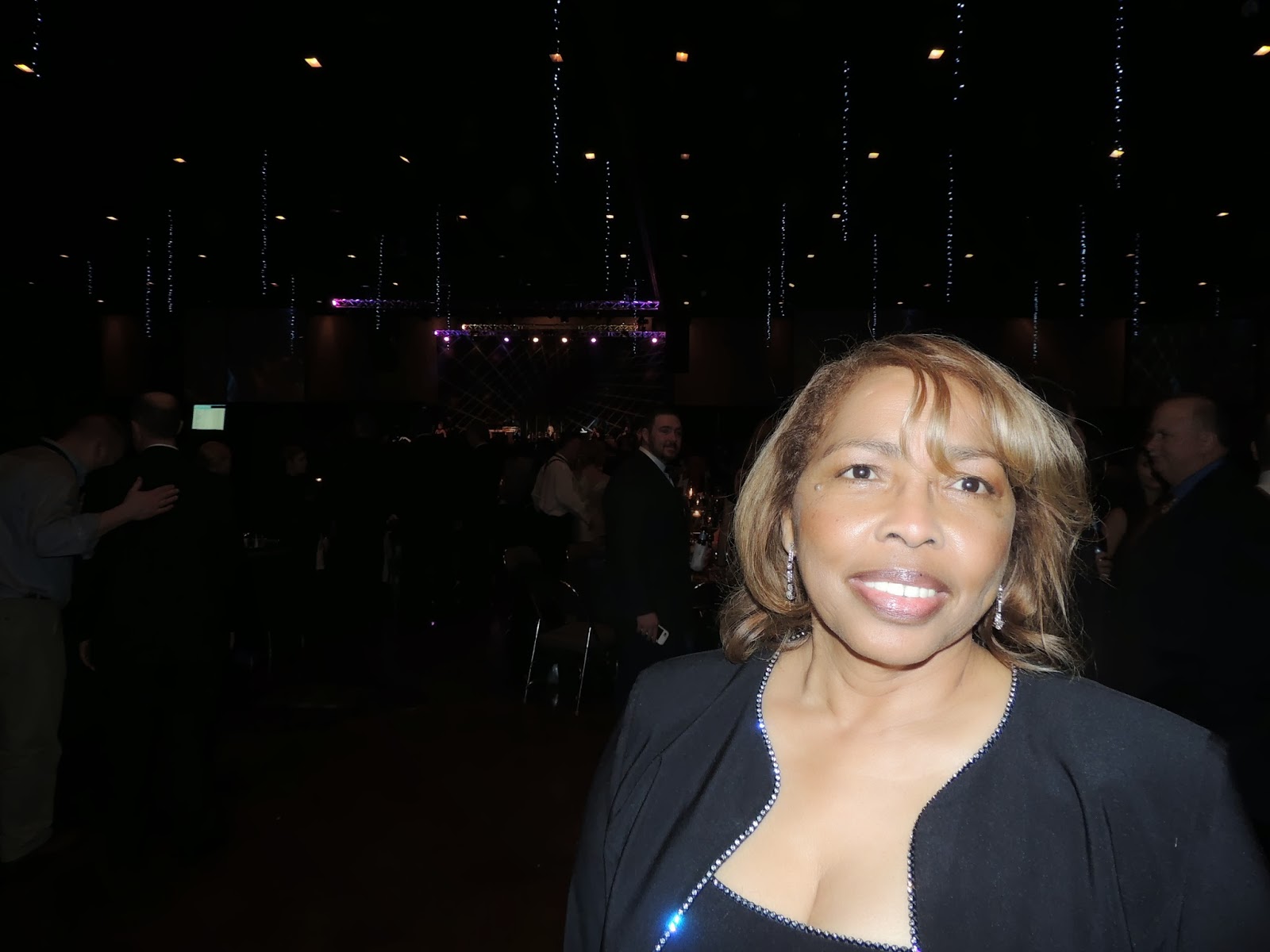 "We might all work separately at our jobs," Watterson says, "but this night was the time to play together, and I'm glad the Sons and Daughters of Douglass Alumni were a part of that."