'Blade Runner' Murder Trial From His Kingsport Competitor: "It is Sad to See Him in This Situation"

PHOTOS FROM CALVIN SNEED, AND WITH PERMISSION FROM STACY BURNS 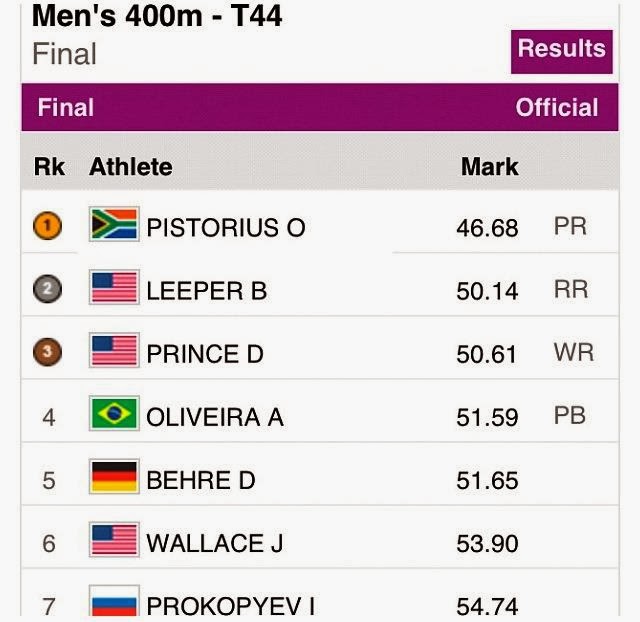 For the longest time, only one man stood in the way of para-athlete Blake Leeper of Kingsport.

The one man whose running speed was just a little faster.
"Oscar Pistorius is a mixed feeling for me right now," said Leeper during a recent interview. "He was the biggest obstacle in my path and a tremendous competitor. "It is sad to see him in the light that he is in right now."
Dissgraced Olympic athlete Oscar Pistorius is on trial in Pretoria, South Africa, on four charges -- including premeditated murder -- in the shooting death of his girlfriend.
Pistorius, the double-amputee "Blade Runner" who became the first Paralympian to compete with able-bodied athletes, shot and killed his girlfriend Reeva Steenkamp on Valentine's Day 2013.
While his prosecutors are claiming he acted with murderous intent, Pistorius insists it was a case of mistaken identity. He argues that he acted in self-defense after mistaking Steenkamp for an intruder.
PARALYMPIC GAMES, LONDON 2012, MEN'S 400m. T44 MEN'S FINAL 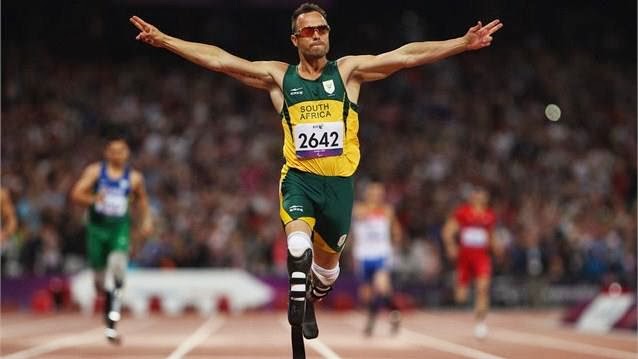 Pistorius is a long away from the track that made him famous. That fact has not escaped his number one competitor.

"Yeah, he was number one, I was number two," Blake says. "Yeah, we battled. But when the blades came off.. once we stepped off the track, he was a human being. Seeing him now with his head hung down, is sad because he and I both were trying to change lives. We were trying to show amputees that they, too, mattered.. they could compete, they could accomplish something that seems impossible. My doctors told me I would never walk, and here I am today." 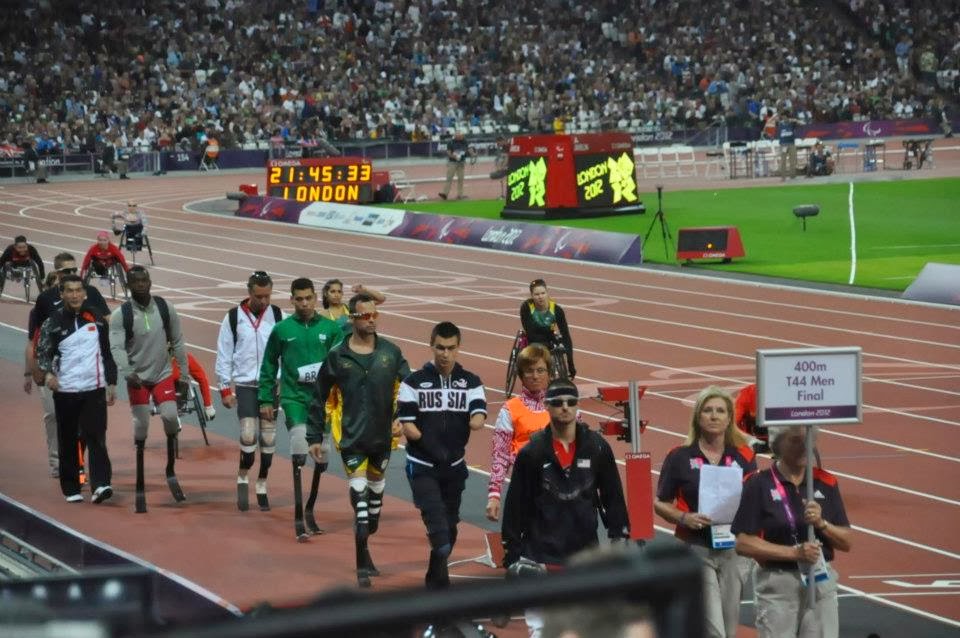 Leeper says, he was always moved by what happened after his races against Pistorius, as much as during the races.
"Once we stepped off the track, there would be little kids with disabilities that would come up to both of us and ask for autographs. There would be kids in wheelchairs that would come up and thank us for what we were doing."
"Both of us... together," Blake remembers. "Once I realized that they were coming up to both of us. It made me realize that, wow man..you do have a bigger mission and it was not just about the competition between us. It was the friendship, too." 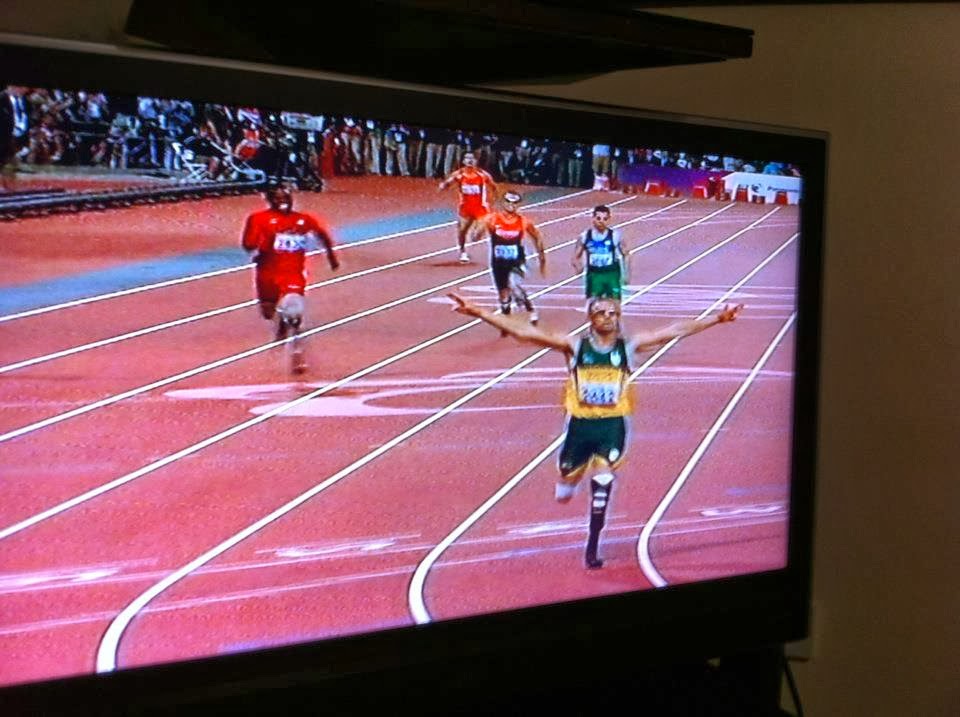 For a while as he was gaining confidence, he was content to be in the shadow of Oscar Pistorius.
"Maybe his current situation, was a sign that I needed to stop riding his coattails," he says. "He was blazing a path and I was going to follow and once he got done, I was going to take his thing and do it better. I was OK with that. But now that he's dealing with the situation that he's in, then it was like 'Blake.. wake up. It's your turn now.' Actually, I wasn't prepared for it.. in my heart, I wasn't ready yet. That's how life does you. It's just one more life lesson that you have to learn the hard way. When it's your time, you have to act on it. I had to put the 'Number Two Mindset' down and pick up the 'Number One Mindset.' Itnstead of two of us now being in both the Olympics and Paralympics in certain races, there is just going to be one of us. It is hard for me and my fellow para-athletes, but at the end of the day, all I can do as a runner and as an athlete and as a Christian, is just go out there and give it my all and try to change as many lives as I can, just like Oscar and I did."
"It's just bad that my time to move up, had to come at the expense of what happened to him."
AT LEFT.. BLAKE LEEPER (Silver), OSCAR PISTORIUS (Gold), DAVID PRINCE (Bronze) 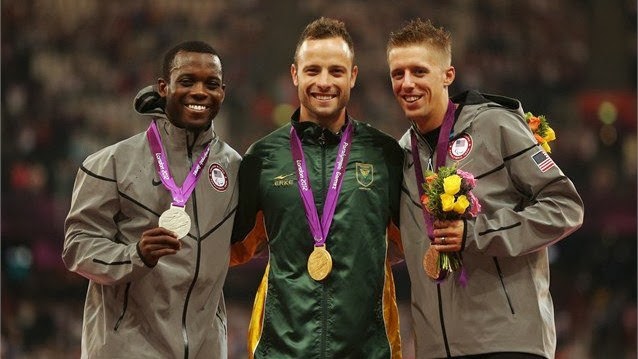 Leeper says, the two actually had a great friendship. He remembers one time after a race when the cameras went away, and the writers went off to report on the race they had competed in, he saw a side to the "Blade Runner" nobody had ever seen.
"We sat down and he went out of his way to share things," he says. "He wanted to make sure I had the right connections in the business we call running.. he wanted to make sure I had the right information. That was special. A lot of competitors will not try to share things like sponsor information, but he sat me down, looked right into my eyes and said 'hey man, don't worry about it.. there are enough sponsors to go around for all of us.' For him to do that, to say that, it was huge for me. The way he treated me and the other para-athletes was very humbling and respectful."
PHOTO COURTESY ABC NEWS 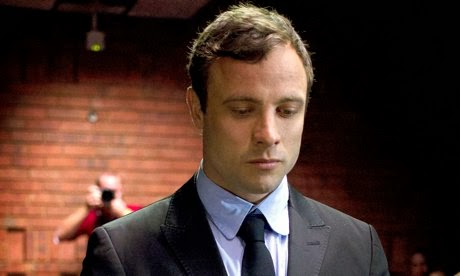 Leeper does wish his former main competitor the best.

""Every day, I pray because I don't want anybody to go through what Oscar is having to go through," he says. "Seeing him in tears, seeing him being dragged down.. you can tell that he is very remorseful and I can say that because I know him. Nobody else can believe that, but I can't help the way I feel. We all make mistakes and he will have to ask God for forgiveness, and that's between him and the Lord. All I can do is be a supporter of his and still be his friend. I'm not here to judge him, I'm just here to be his friend." 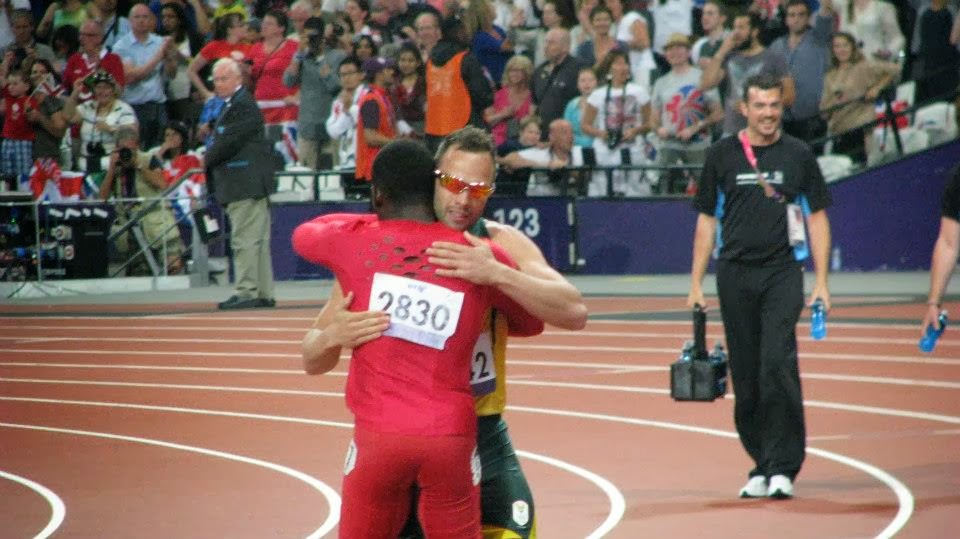 Blake says, he wants his friends and supporters to have that same attitude.
"Just pray for both sides, his and his wife's family," he says. "He knows I am here for him if he needs support. His legacy is tarnished, but I hope people don't forget his legacy because he changed a lot of lives. He set the bar high, and I respect that. That's what I love about Oscar.. he was doing something above average."
"He's just like me. He wanted to be the best runner in the world."


WATCH THE 400m RACE BETWEEN OSCAR PISTORIUS AND BLAKE LEEPER FROM 2012
Posted by douglassriverview at 8:10 PM