Coach Robert C. Deering: A Tribute from One of his Douglass Players

THIS TRIBUTE IS WRITTEN BY DON HICKMAN, DOUGLASS ALUMNUS '66 & FIRST AFRICAN-AMERICAN GRADUATE OF DOBYNS-BENNETT HIGH SCHOOL '67.  HICKMAN PLAYED BOTH FOOTBALL AND BASKETBALL FOR THE DOUGLASS TIGERS FOR SEVERAL YEARS IN THE EARLY 60'S 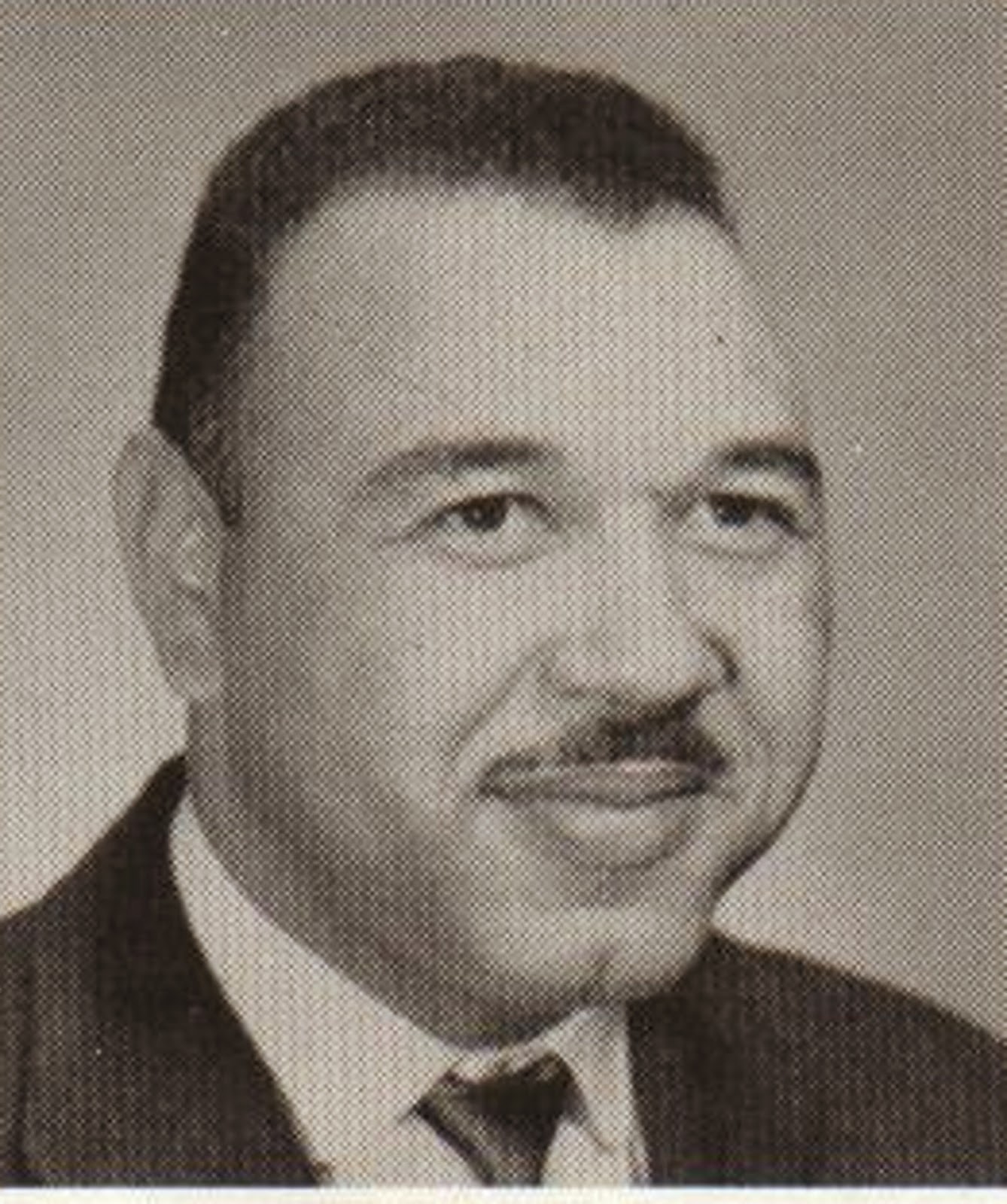 Mr. Robert C. Deering was a terrific classroom teacher and an extraordinary basketball and football coach at Douglass.  Interestingly, the athletes never called him "Coach Deering."  I suppose it was out of respect for the things he did for us off the field.  I always marveled at how he stood before our biology class and rattled off information.  He never looked down at his notes or at the textbook.  And, when someone came up with a wild guess in response to one of his probing questions, he'd always come up with a philosophical statement.  No doubt, my former classmates will remember his remark to the late Jim Nash---"it's better to keep your mouth closed and be thought a fool, than to open it and remove all doubt." 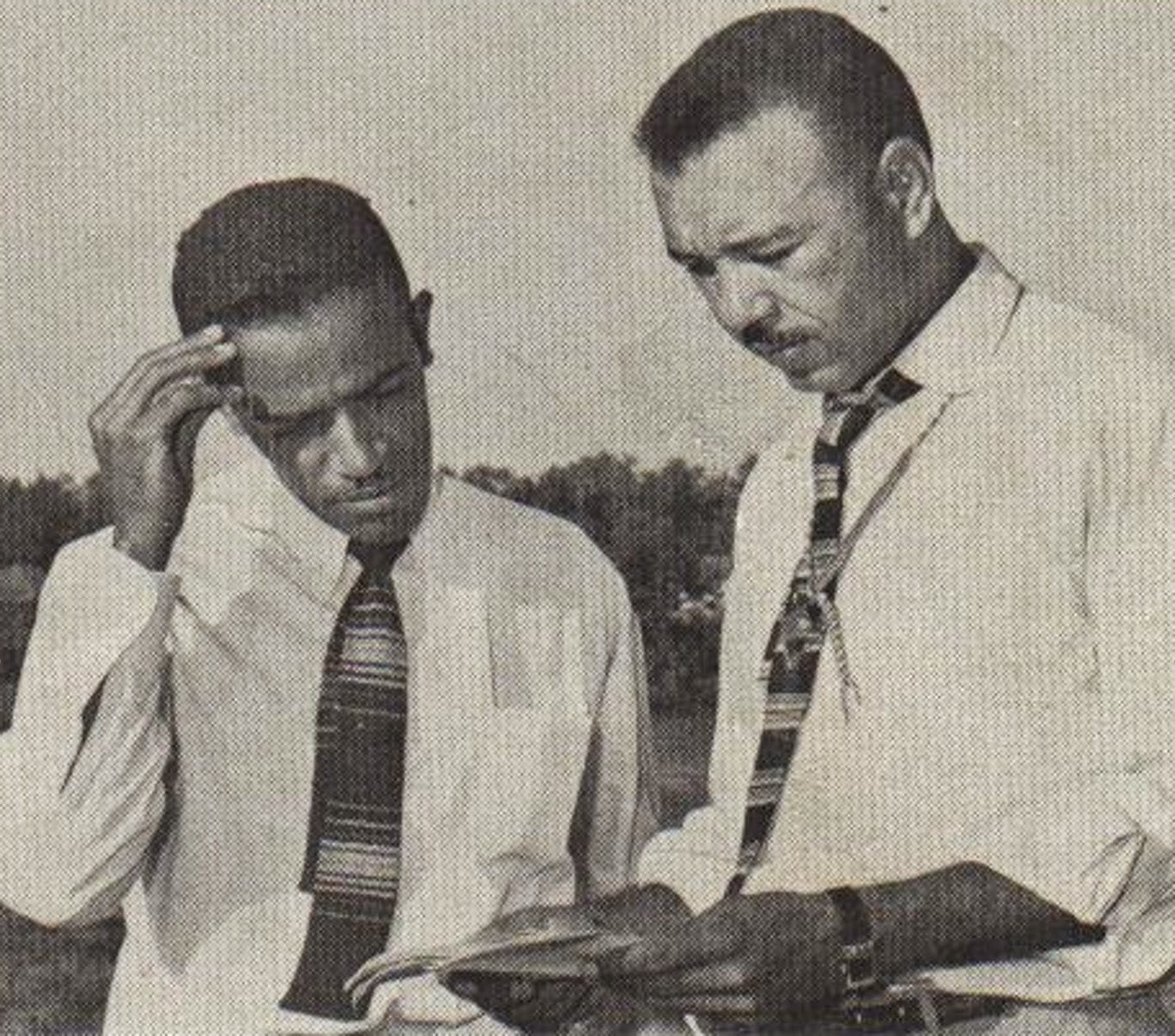 A good portion of Mr. Deering's half-time speech to our team, can't be printed today.  His sizzling rhetoric fired us up (or scared us) into playing harder.  It always made us a good second half team.  I must say something about his trusted friend, sidekick and assistant Wilbur Hendricks.  'Fess' is what we called Mr. Hendricks behind his back because that's what Mr. Deering always called him.  'Fess' ' favorite line is one that I used a few times with the teams I coached at Oak Ridge High School:  "Sometimes you just can't make chicken salad out of chicken s#!*."  As an adult, I look back and realize that both Mr. Deering and Fess had coaching philosophies that were right for the times.  They didn't try to be someone that they were not.  Their lessons were simple.  "Be on time, accept responsibility for your actions, give your best effort, and be good citizens in the community." 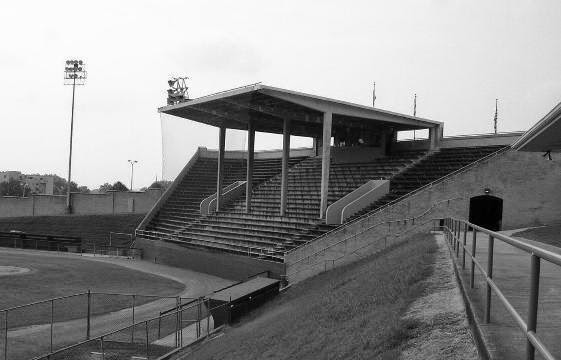 I look at some of the old photographs and marvel at how young most of us were in the early and mid 60's.  As a member of the Douglass Tiger footballt team, I'll never forget two events at J. Fred Johnson Stadium ('J. Fred' as we called it).  Mr. Deering stood there by the dressing room door in the bowels of J. Fred Johnson Stadium... he was wearing those brown wing-tip brogue shoes, nervously clicking his heels together as he always did, and his dress pants leg rolled up just above his ankles.  That was his coaching attire.  (Many will recall that we played our games on either Thursday night or Saturday night.  DB had dibs on the stadium on Friday night.  Frequently, when we played on Saturday night, the stadium was overruning with fans, many of them white citizens.) 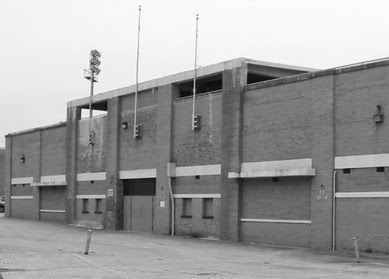 That night, frustrated by the play of one of my teammates, Mr. Deering threw his cup of hot coffee against a wall on the other side of the room.  Thirty or more players were in that room trying to regroup.  "Bug" Horton said it first, but anyone who was there that night, will confirm his statement.  Every one of us got wet when that small eight-ounce cup of coffee splashed against the wall!  Then, on a different night, it was my time to be chewed out for throwing a TD pass to James McMiller in the Bluefield game.  We scored, but I didn't run the play that Mr. Deering called from the sideline.  It made him even angrier when I admitted that 'Pookie' McMIller actually called the play in the huddle, demanded that I throw the ball to him, and I didn't have the guts to challenge him.  I learned what "controlling the huddle" meant that night 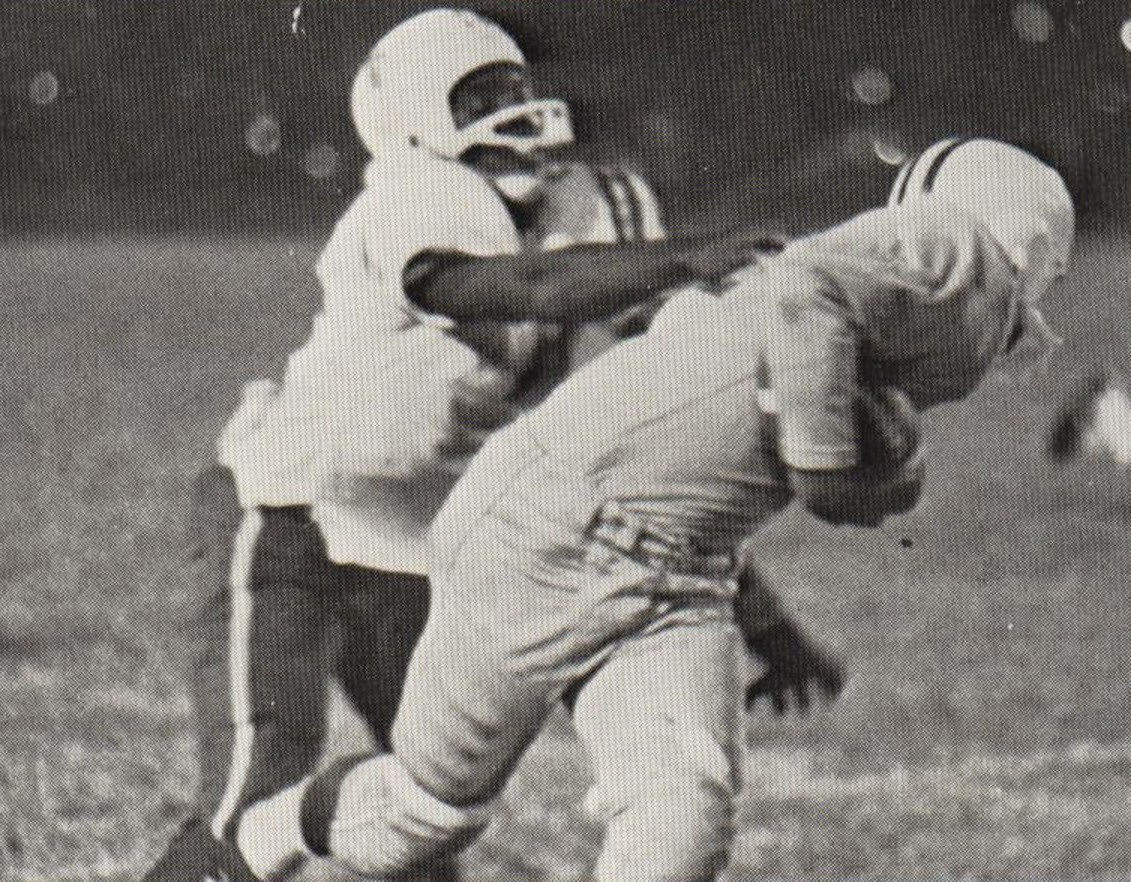 Some things stay with you forever.

How can I overlook the night against Elizabethton, when 'Pookie' caught a pass and outran the entire Elizabethton secondary.  At the 50-yard line, he made an abrupt left turn toward the sidelines and stepped out of bounds and handed the football to Mr. Deering.  He admitted afterwards--and Mr. Deering concurred--that Mr. Deering wanted to let some of the younger fellows play if we got the ball to midfield.  'Pookie' was merely following instructions.  The younger players played and scored.  That story can be found in a Times-News article if you don't believe my account. 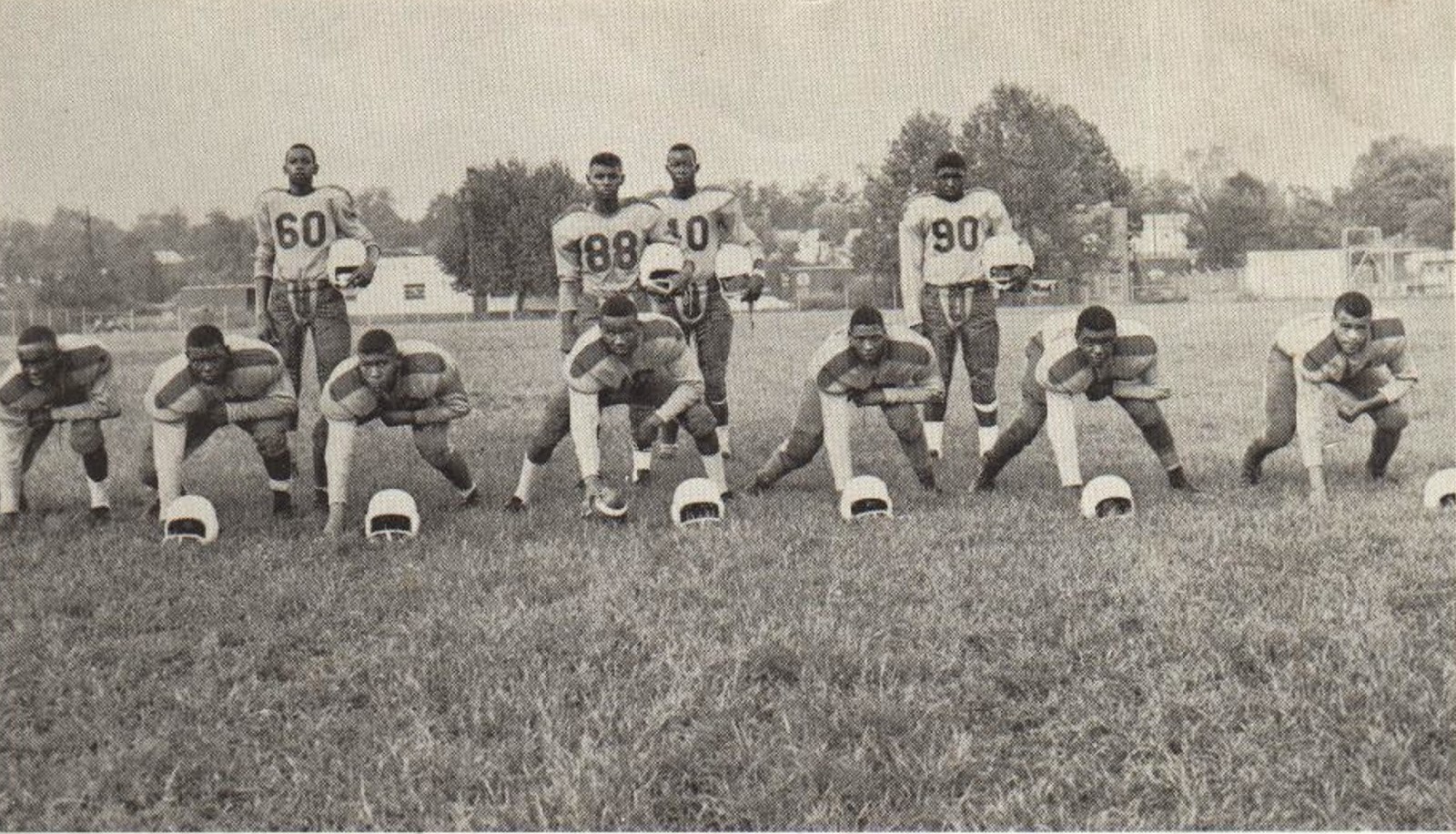 Mr. Deering always required us to run laps around the Douglass practice field before football practice, to loosen up each day.  I hated that and the 'duck walk' and the 'crab walk' too.  I never complained to him.... no one did.  No drinking water during practice either.  Boy, how things have changed.  Mr. Deering really liked my brother Jim.  I suppose he'd be called a 'team manager' today.  Mr. Deering allowed Jim to sneak water out on the practice field and gave it to players. 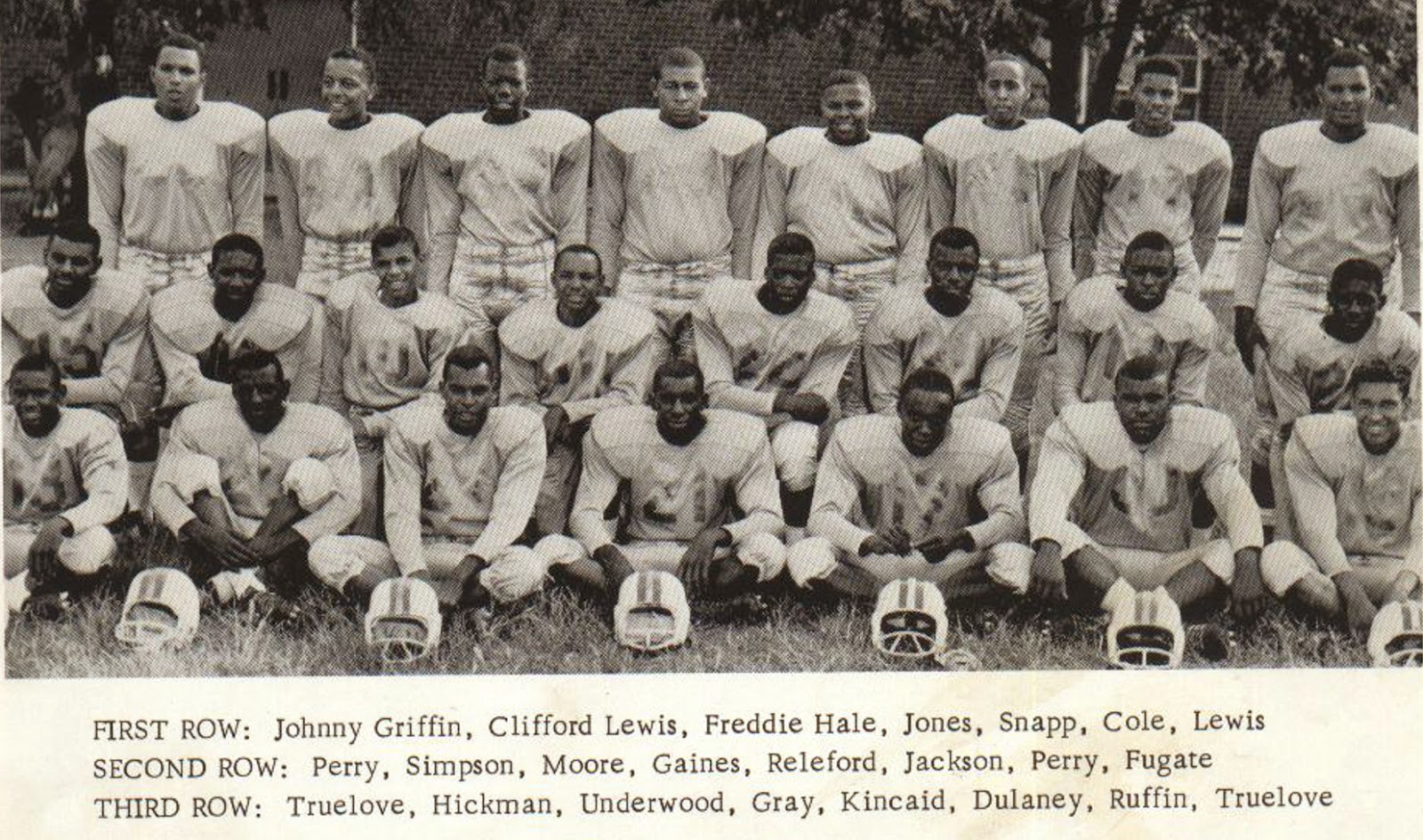 How can I forget that first year players had to demonstrate their toughness and desire to play football, by lining up in front of guys like Doug Releford, Ruben Adams, Clifford Lewis and Harry Truelove.  Doug is a really nice guy.. always has been.  But, boy how his demeanor changed in a football uniform!  I suppose that's one reason why he was always a leader of our team.  Poor Butch Hendricks was salivated during one of these drills.  But he never quit... I always admired him for that.

We often scrimmaged against the 'old Douglass vets' who would come by practice from time to time.  I hated playing against those ole timers.  They didn't have to prove anything to us.  We already admired most of them.  All that stopped in about 1964, when Varley Hickman hit one of the old timers and broke the guy's leg (even Skip's dad, Mr. Simp Brown would be out there giving advice.  Thank goodness he was too old to line up against us.  Many of the ole timers told us that Simp Brown may have been one of the best to ever wear a Douglass uniform.  No doubt he passed that on to Skip.) 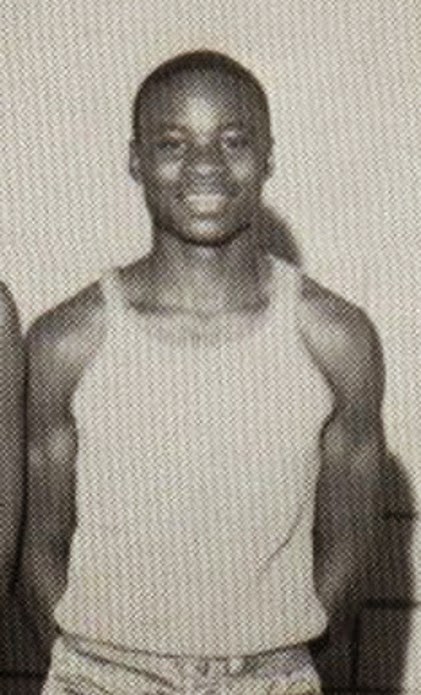 Mr. Deering allowed me to play quarterback for almost two years.  It was a humbling experience.  One I did not seek.  He made sure that I knew he selected me, not because of my ability.  He jokingly told me I was the only one scared enough to do what I was told and I could remember the plays he called.  I believe I can still tell you how to run a T-3, T-4 pass... and a T-7, T-8, H & E pass.... and an F-2-at-8 from the Douglass playbook. 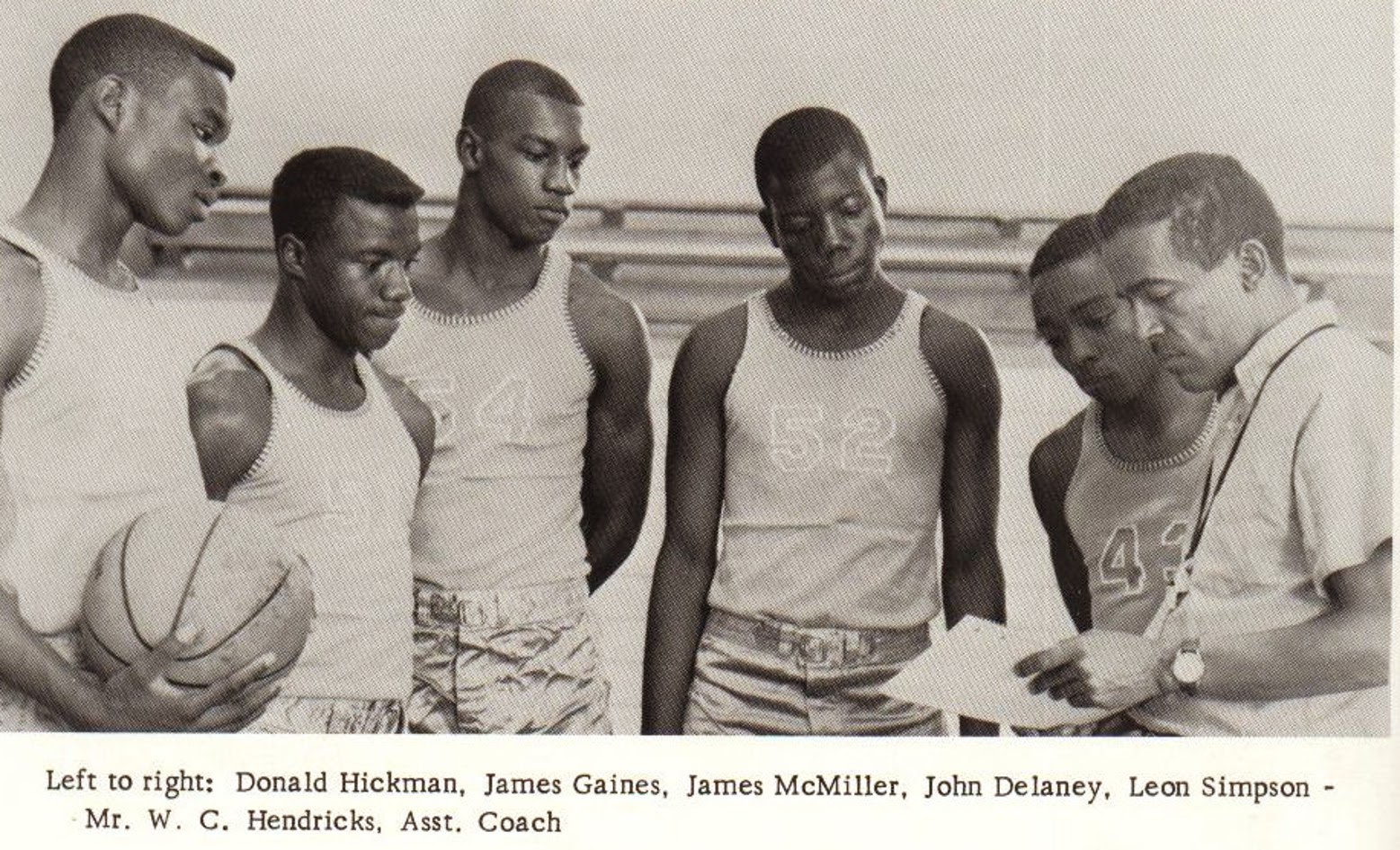 And who can forget the memorable night  Mr. Deering ordered us out of the Langston High School locker room at halftime of the basketball game.  Some of the schools in the Tri-State Conference in which we played, invented the word 'home cooking."  I still remember the score at halftime that night---54 to 17.  The father of one of the Langston players was calling the game (that's the truth!)  At halftime, Douglass had 5 or 6 basketball players left on our team who had not fouled out.  We were sitting on the bus (the 'yellow hound') when the buzzer sounded for the start of the second half. Someone shouted from the front door "they're not in the dressing room, they are on the bus!"  I was genuinely afraid for my safety that night.  Some of the rowdy Langston fans came outside and started rocking the school bus we were on.  Thank goodness, we got out of there.

I guess you've figured out from my early comments... Mr. Deering hated losing!  He tried to instill that in us, too.  I'll admit that he did other things while he was our coach---but coaches are supposed to be legendary, aren't they? 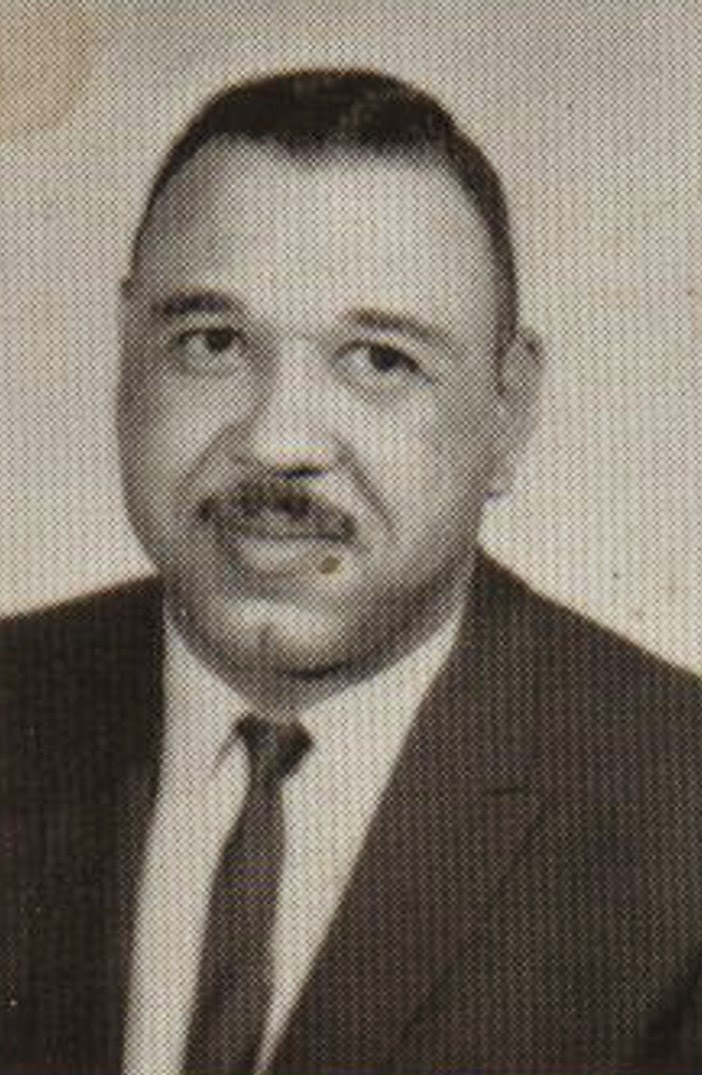 As the years have passed, I realize he really impacted my life and the lives of many of my teammates and friends in a positive way.  He taught us how to compete.  He taught us how to respect the game. He made us tougher men.  He made us better people---more caring  and more respectful of others. Mr. Deering and 'Fess' were rough on all of us, but they were firm and fair.  Mr. Deering didn't have kids, so I guess that's why he treated us like we were all his children.  My teammates and friends loved and respected him and Fess.


I hope someone in the community is doing that same thing for this generation of young people in Kingsport.