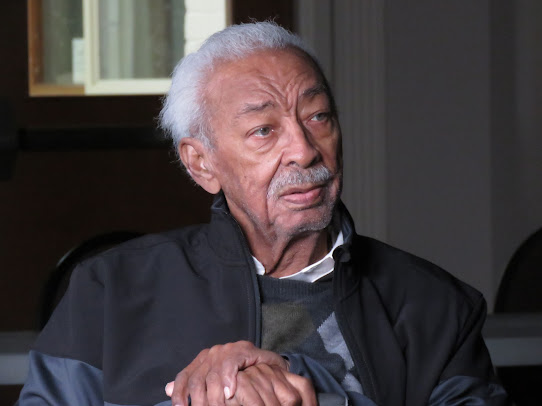 Mr. Watterson was born on May 19, 1926 in Hawkins County, the youngest of six siblings, to the late James Wiley Watterson and Margaret “Maggie” Armstrong Watterson.

Richard Watterson showing the Douglass School sports trophies to ABC News Correspondent Will Carr for a national news story on the DB Tribute to the Douglass Tigers Basketball Teams, Feb. 1, 2020.  Richard was what he called "a small forward" on the Tigers basketball teams.

Mr. Watterson was educated in the Kingsport School System, graduating from Douglass High School in 1943 and received his Bachelor’s Degree from Livingston College.  He enlisted in the U.S Navy serving from 1943 to 1950 as a Seaman First Class. 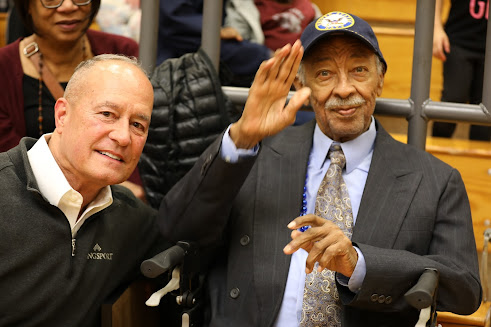 On May 20, 1973, Mr. Watterson was duly and legally elected to the Kingsport Board of Mayor and Aldermen.  He was the first African-American man to serve the city of Kingsport as an Alderman.  He served 24 years on the board, also serving as Vice-Mayor until his retirement in 1997.  He also worked hard with the Kingsport City School Board.

Not only did Mr. Watterson served as a faithful, loyal and dedicated member and Trustee of the Bethel AME Zion Church. He also served on the boards of the Upper East Tennessee Human Development Agency, the Sequoyah Boy Scouts of America, Habitat for Humanity, Kiwanis Club, Kingsport Elks Club, Kingsport Esquire Club, the Optimist Club and the Boys and Girls Club of Kingsport. 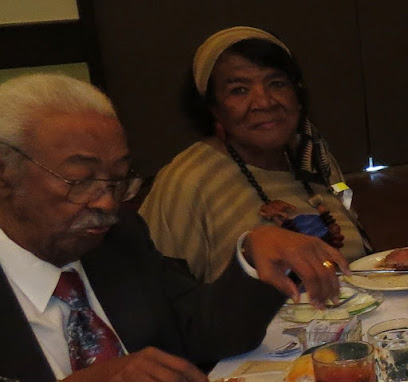 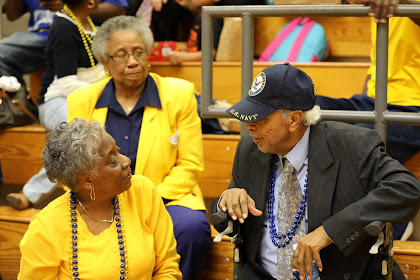 Richard Watterson enjoying himself with family at the DB Tribute to the Douglass Tigers Basketball teams, Feb. 1, 2020

A military graveside service will be held at 2 PM on Monday, January 11, 2021 at the Mountain Home National Cemetery in Johnson City.  Pastor Hugh Hale will also officiate. Family and friends will serve as pallbearers.  Those wishing to go in procession to the cemetery are asked to meet at the Dobyns Bennett parking lot no later than 1 PM Monday.

The Carter-Trent Funeral Home in Kingsport is serving the Watterson family.

Posted by douglassriverview at 7:06 PM