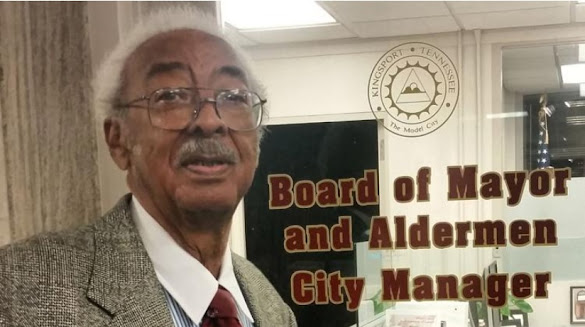 Richard Watterson was first elected to the Kingsport Board of Mayor and Aldermen in 1973 – the first African-American to do so. He served until 1997 and during his long tenure on the board, Watterson served as vice-mayor from 1981 to 1995.

Richard Watterson, the first African-American elected to the Kingsport Board of Mayor and Aldermen, passed away on Monday because of COVID-19 complications.

According to his youngest son Ricky, the elder Watterson passed away at 4:30 AM at the VA Medical Center.  Arrangements will be made through the Carter-Trent Funeral Home.

Ricky Watterson described his father as having true compassion and love for all people., and someone who tried to tell the truth and be honest at all times.

"I think he had true compassion for every citizen as a human being.  (He) didn't see black and white and didn't care about black and white.  He just cared about everybody, it shows and I think the people cared about that," Watterson said.  "He believed in everybody, it didn't matter about ethnicity or anything and when you get past that, you're able to touch people and relate to people."

Watterson was first elected to the Board of Mayor and Aldermen in 1973.  He served until 1997 and during his long tenure on the Board, Watterson served as vice-mayor from 1981 to 1995.  According to city officials, Watterson often garnered the top vote count during many of those city elections when his name was on the ballot.

"I think he lasted 24 years on the BMA by telling the truth, by listening to people and by truly wanting to help people," Watterson said of his father.

During his tenure on the BMA, Ricky Watterson said his father promoted the Sunshine Law, helped pass liquor by the drink, and served on the task force that worked to address issues in the Riverview community.

"The biggest thing is, Dad had a compassion for people, he listened and he took it to heart," Ricky Watterson said.

Watterson graduated from Douglass High School in Kingsport, having played on the basketball team there.  He attended Swift Memorial Junior College in Rogersville and Livingstone College in Salisbury, North Carolina.  He served in the U.S. Navy from 1943 to 1946, with most of his time spent on the U.S.S. Nassau.

At the age of 12, Watterson went to work for Harvey Brooks, a local businessman who built and lived in the Allandale Mansion.

Richard's mother Maggie and his aunt Savannah also worked for the Brooks family.  Richard Watterson ultimately worked for the family for 20 years, working as a chauffeur. butler and caretaker.

Watterson served on a number of state and local boards, including the State Board of Legal Services and the Board of Directors of the Kingsport Boys Club.

He was also the State Commissioner for Human Development, the first chairman of the Riverview Branch Boys Club, the President of the Esquire Club, and a member of the Kiwanis Club and the Optimist Club.

In 2016, the year Watterson turned 90, the BMA proclaimed April 6th as "Richard Watterson Day" in Kingsport.

"Richard was the first African-American elected on a citywide basis after integration, and he was re-elected every term until he decided not to run again.  That speaks volumes of the job he did in consistently representing his constituents," said former city manager Jeff Fleming.  "He was a visionary who had a unique way of convincing ordinary people to do extraordinary things."

Former Kingsport Board of Education Paul Montgomery said Watterson worked hard for all the citizens of Kingsport and especially hard for the school system in its efforts "to make the city schools the best we could have.  He was a friend of education.  He was our go-to person."

"Our community has lost a pioneer in local government," Montgomery said.  He helped mentor me in politics.  He was a good man."

Posted by douglassriverview at 9:36 AM