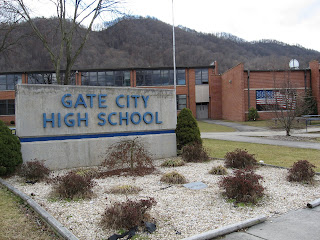 Black History Month display retains tradition--Reprinted from the Kingsport Times-News, 2/18/07
PHOTO AT RIGHT: Years ago, Mr. Ross and other African-American children were not allowed to go to Gate City High School. Years later, the school board decided it was a waste of money to bus children 10 miles across the state line to Douglass School in Kingsport.

‘Mom’s expectation of history is that the past, present and future connect if you know whereyou are at and where you are going.’ — Wallace Ross Jr.
By CLIFFORD JEFFERY cjeffery@timesnews.net