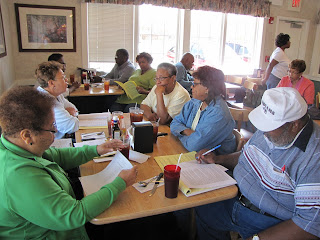 Minutes of the last meeting were read. Motion to accept the reading of the last minutes was made by Calvin Sneed, second by Virginia Hankins. Motion carried.

Financial Report was read by Sandra Wilmer, we have $5,382 in the treasury. Motion to accept the financial report was made by Andra Watterson, second by Pamela Sensabaugh. Motion carried.

Virginia Hankins stated that the alumni gave the impression that we were going to put half of the money that we raised with the ads in the scholarship fund. Linda Bly was under the same impression. The association votes to transfer half of the money raised to the scholarship fund and it was voted down. Ozine Bly made a motion that we transfer $1500 to the scholarship fund it was seconded by Lillian Leeper, but he resended his motion and decided on $2000 to be transferred instead. Motion was seconded by Linda Bly. Ozine stated that the reason he low-balled his motion was because we are getting ready to move into our new location and he would like for us to be able to pay our phone and internet for six months or so in advance. Motion carried.

Andra Watterson stated that we need to clean out our storage unit and she needs help in doing so, if you would like to help Andra contact her.

Calvin Sneed said that the only place to put the historical marker is the island on Wheatley Street, the suggestion that Virginia Hankins and Wallace W. Ross, Jr. had made. Calvin also stated that the Douglass Alumni Association of Kingsport's new address will be 301 Louis St, Suite 104, Kingsport, TN 37660.

The City of Kingsport has paid $4000 for a bust of Fredrick Douglass, which will be memorialized in the V.O. Dobbins Sr. Complex. There were several discussions about why Frederick Douglass was chosen. Virginia Hankins made a motion that we move on and accept the gift graciously.

Calvin Sneed gave an update on when we will occupy the V.O. Dobbins Sr. Complex.. The Douglass Alumni Association should be able to move into its office around July 1, 2010 and by the third week in July, the entire facility will be at full occupancy. Calvin said that the city recommends that the last week in July would be a good time for a ribbon-cutting ceremony. The ribbon-cutting ceremony committee consists of Calvin Sneed, Johnnie Mae Swagerty, Parks & Recreation, The City of Kingsport, Lillian Leeper and Thelma Watterson. That committee is not part of the Douglass Alumni Association.

Douglas Releford stated that he closed out the alumni’s P.O. Box, and the mail will be forwarded to our new address.

Douglas Releford had requested that a poll be put on the website for alumni to vote on whether they wanted to change the date of our reunion. After the votes were tallied, 79% of the vote was to leave the reunion where it is, around July 4th. Linda Bly suggested that we put it back on the website and add Memorial Day weekend and Labor Day weekend. Virginia suggested that since we have already voted to keep it where it has always been, that we hold that date until our next reunion around July 4th next year, and vote on it again. Motion was second by Andra Watterson. Motion carried.

Sandra Wilmer suggested that we plan a cruise. A Cruise Committee was appointed, Linda Bly, Virginia Hankins, Lillian Leeper, Thelma Watterson and Sandra Wilmer. The committee will present details at our next meeting.

Andra Watterson suggested that we need to have a fund raiser for our kids.

There was some discussion concerning Jeffrey Faulkerson. A suggestion was made that we should give him more money for the preparation of our non-profit paperwork to the IRS. After the votes were tallied, it was voted not to give Jeffrey any more money because a total amount was never specified for the work. A letter will be sent to Jeffrey, explaining why we voted not to give him any more money.

Our next meeting will be May 15, 2010, the place is TBA. Motion to adjourn was made by Douglas Releford, seconded by Linda Bly.