TITUSVILLE, FLORIDA -- — School Resource Officer Carolyn Gudger says her confrontation with a gunman in a corridor of Sullivan Central High at Blountville, Tennessee changed her life in several ways. 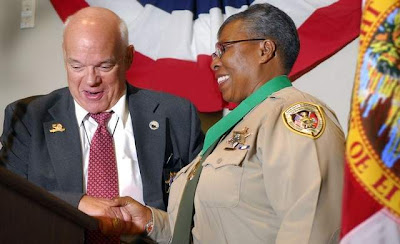 Her quick thinking in getting the gunman away from others potentially saved a number of lives, and won her national recognition. But Gudger said it also "made me follow God's lead more" in various aspects of her life.

Gudger, 58, was honored Monday as the 2011 Law Enforcement Officer of the Year during a ceremony at the American Police Hall of Fame & Museum in Titusville.

In describing the incident after the award ceremony, Gudger said she was suspicious of the man who entered her school the morning of Aug. 30.

She had seen him loitering in the parking lot outside the school earlier in the day, and when she approached him, he drove away.

The man, identified as Thomas Cowan, later entered the lobby of the school, and said he wanted to speak with the principal, Melanie Riden. Gudger accompanied the principal to the meeting.

Cowan then pulled a handgun from his waistband, and pointed it at the principal's head, saying he had some unspecified complaint with the government. Gudger drew her weapon, and got the principal out of harm's way.

A standoff between Gudger and the gunman ensued, while the 1,200-student school went on lockdown. The standoff ended when Gudger and two other officers who were called the scene ordered Cowan to drop his weapon. Instead, he pointed it at Gudger, and all three officers shot Cowan, who died later at a hospital.

In her remarks to the more than 100 law enforcement personnel gathering for the ceremony, Gudger said: "To all of our officers, I bid you Godspeed and God's safety."

Dennis Wise, president of the American Federation of Police & Concerned Citizens, said, as the award recipient, Gudger is among "the best of the best" in law enforcement.

They were called to a domestic dispute in November, in which Gabriel Field had fatally shot his girlfriend and was shooting at other people in the house. When the officers confronted Field, and he continued to shoot at one of the remaining occupants of the house, Owens fired three shots that killed Field.

It was later found that Field had told people he always wanted to kill a cop, and had targets in the image of officers in his home, including some with a tin foil badge attached.

Owens and Hoskins-Pettingill were among 11 local honorees at Monday's award ceremony.

Gudger is a 15-year veteran of the Sullivan County Sheriff's Office in Tennessee, including nine years as a school resource officer and six as a corrections officer. She also is a finalist for the "America's Most Wanted" All-Star Award, and has won a number of other recognitions.

In addition to the plaques, medals and badges she was awarded as the 23rd-annual Law Enforcement Officer of the Year recipient, Gudger received a Glock pistol, and passes to the Kennedy Space Center Visitor Complex, SeaWorld and Walt Disney World.