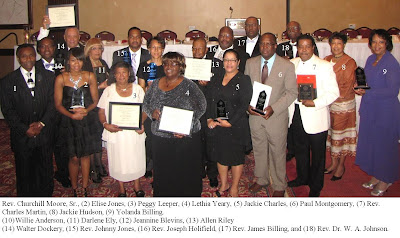 These are the 2011 winners of AHERN's Distinguished African-American Pastor, Professional, Student and Reporter Awards. The awards were presented at a banquet at the Crowne Plaza Hotel in Knoxville on August 19th, 2011.

Not shown is Calvin Sneed, 2011 DAPS Reporter of the Year - he's the one taking the picture.
Posted by douglassriverview at 10:32 AM