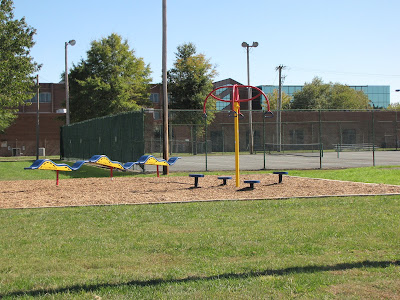 It's no secret that the Riverview community is tied directly to its next-door neighbor.

Not only is Eastman Chemical Company headquartered in the community, but a wall of the neighborhood's Douglass School literally faces it right across the street.

So what does Riverview, Eastman Chemical and a wall all have in common? 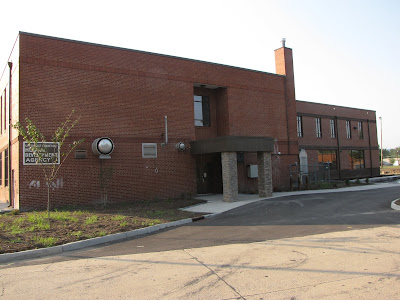 "The city of Kingsport wanted to do a mural on the side of the V.O. Dobbins Sr. Complex, that makes the building look better on the side that faces Eastman and the entrance to the community," says Kathy Blair of Murals & More in Jonesborough. "Since the Headstart entrance is on that side of the building, the city wanted to incorporate the idea of industry and the idea of kids learning."

Click here to see the progress on painting the Headstart Mural, the finished product, and other murals painted in Kingsport.

The result is a huge mural by Murals & More costing $9,800, on the cafeteria side of the former Douglass School building at the Headstart entrance, facing the Eastman Chemical headquarters. The money came from the "Percent for Art" program, in which a portion of the renovation costs of the building are designated to pay for artwork and other cultural items in the building. As with the Douglass Teacher's Bench, Kingsport has a city ordinance that allows a small percentage of funds for a capital project to be set aside and used for art purposes. 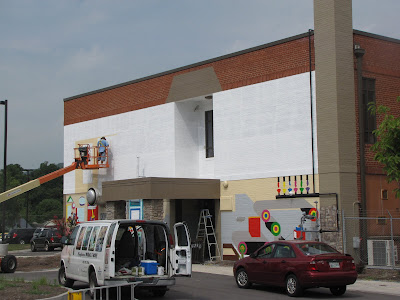 The mural is a combination kids-industry theme, but getting to that point, proved to be the biggest challenge for Murals & More.

"The most difficult thing we had to do," says Mrs. Blair, "was combining the sophisticated look of a bustling industry, with what we call, the 'kidsey' look. When the kids come into the building, the wall is the first thing they see and when folks look at the entrance, we wanted them to see that industry begins with the imagination of children." 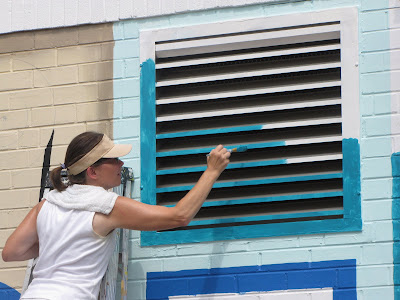 Oddly enough, the Douglass building lent itself to the mural-making process. It does that through a series of "interruptions."

"The wall has several protrusions, several things that stick out from it," she notes. "One of the pipes that comes out of the building shoots bubbles almost up to the roof as part of its operation.. you've got bubbles passing up past what used to be a balcony there. Plus, there are two big vents and a big, ugly box and two big round things, I think they're a couple of fans that vent the cafeteria through the outside wall that stick out, and it's a very bland, boring, industrial kind of look. It's not stimulating to a child's mind at all."

"We wanted to incorporate the 'interruptions' into the mural somehow."

So what Mrs. Blair did, was dream up a sequence that would stimulate ANY imagination. 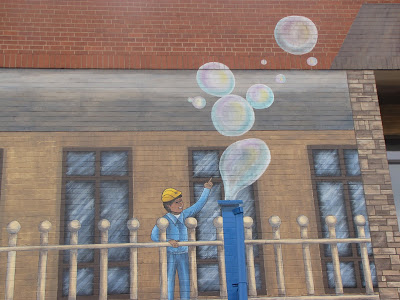 "We made the upstairs a fake balcony with stack stone and columns to match the building, and we used the idea of gears and levers connected by pulleys and ropes," she says.

Combining the "kidsey" look and the "sophisticated" industrial look proved a challenge.

"It's easy to make it all 'kidsey' looking, or all 'sophisticated industry' looking, but putting them both together was hard," says Mrs. Blair.

All of that looked fine on paper, but putting it to brick was an even bigger challenge. 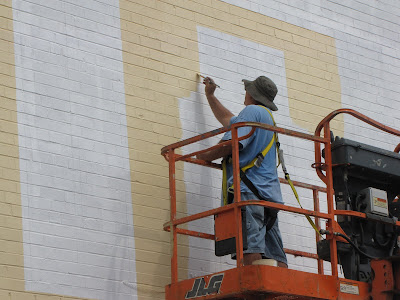 "It was seven weeks of hard work," she says. "First, we painted the bricks with two coats of a good white primer, then we started with our regular house paint. We use Benjamin Moore Exterior house paint. The wall ended up with two good coats of primer, and at least two coats--some places, even three coats of Benjamin Moore paint on top of that."

Much of the time, the weather did not cooperate.

"The weather was our worst enemy," Mrs. Blair says. "Seems like, ever time we do the side of any building, we end up being out there in 105-degree heat index, in 90-degree-pus air temperature. We had that solid for about 3 and a half weeks, every single day. Whenever you put paint on the side of a building that's hot enough to fry and egg on, the bricks just suck up all the paint and you can hardly smear enough paint to stay in place. It's difficult to blend in the paint when it's that hot, but we didn't have any choice. We can't control the weather." 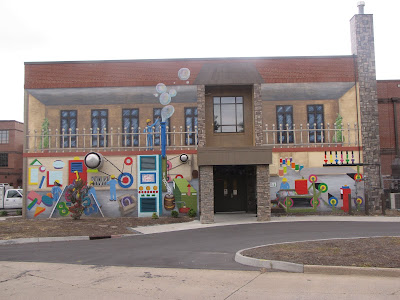 What resulted from all the hard work, is a colorful mural, unusual in its theme, but unique in its approach.

"This is a one-of-a-kind mural that Riverview residents, the city of Kingsport and the surround industries including Eastman, can be proud of," says Mrs. Blair. 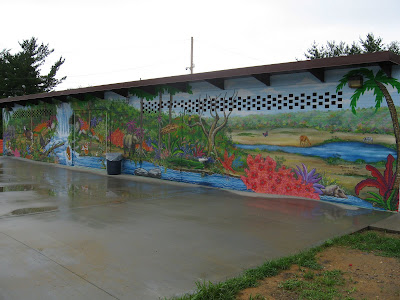 Riverview has been the recipient of another mural that is equally as eye-catching. Murals & More also painted the sides of the Riverview Splash Pad building in a safari theme 5 years ago. It was the company's first project on the list in the "Percent for Art" program. In 2006, the city demolished the Riverview Swimming Pool and replaced it with a safari-themed splash pad. Murals & More was hired to paint the four-sided safari mural on the sides of the old swimming pool building. The vibrant colors have proven to be a draw for kids to the Splash Pad.

Another Murals & More painting that has people turning their heads, is a huge mural on Clay Street that raised eyebrows first, then raised spirits. 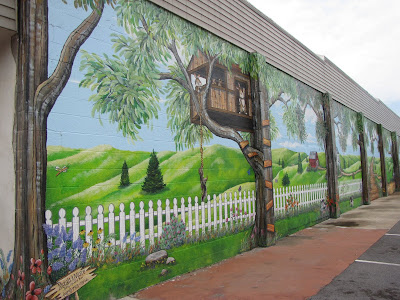 "That original building on Clay Street had another building torn off of it, leaving a really ugly side with columns that helped support the wall of the building torn off," she says. "Even before the city commissioned us to paint a mural, we had to go in and repair some of the columns, so the mural wouldn't have jagged edges to it. The city wanted us to do another kind of 'kidsey' scene because that part is the Kingsport Child Development center, so we had to also design something that looked good in the other part of downtown."

Murals & More used locals' love of trees to stand out in the painting.

"We made every one of the columns that were sticking out, a tree, and the fact that the columns were sticking out, made the images 3-D images," she says. "In between, we painted treehouses and rabbits, ponds with ducks, racoons in the trees, in a kind of country setting. That's also the new educational corridor in the Clay Street area, and everybody seems to enjoy seeing the mural. It looks so much better than the ugly wall that was there before." 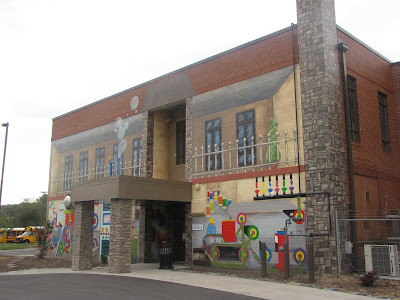 Both murals are examples to the spirit of the communities they serve.

"Dobbins is a wonderful community center now," says Mrs. Blair. "The renovation really improved the area, and the showcase of artwork around the building has increased the value of the neighborhood. I had been reading the history of the Douglass School on the Historical Marker, from when the building first became a school. It's remarkable that 60 years after it was built, the building is still in the business of educating students."

"We hope our mural helps to give the building a new lease on life, along with the renovations."
Posted by douglassriverview at 1:40 AM