Kingsport’s Kitchen of Hope gets reprieve once more

>‘You don’t have to tell me that the economy is bad or that people are struggling. I see it every day.’
— Geraldine Swagerty 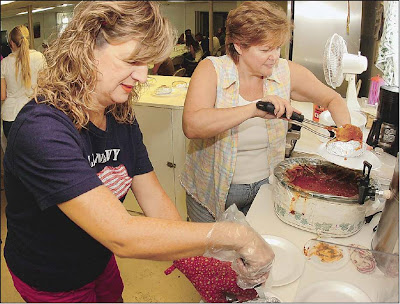 KINGSPORT — Geraldine Swagerty has seen her allvolunteer soup kitchen teeter on the brink of closure several times since opening 12 years ago. Each time, the odds seemed to be stacked against her. Then something happens.
“It’s got to be God wanting to keep it open. Do you have a better explanation for it?” she asked. “I know it’s him because we are still cooking meals.”
An insurance company that provides a policy for the Kitchen of Hope in downtown Kingsport informed Swagerty in July that unless a new hood ventilation system was installed to meet state code, the kitchen would have to close. 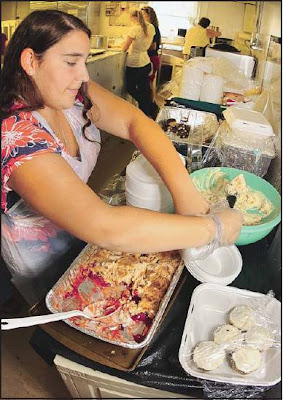 An appeal from a volunteer worker at the kitchen has gotten the Sevier Avenue location a reprieve, and the Kitchen of Hope is still feeding the hungry thanks to a local contractor who agreed to get the parts and labor, all at a reduced cost.
“Nellie (Vaughn), who does a lot for us, made the call to the insurance company, and we worked out a plan and schedule they agreed to,” said Swagerty, 75, who noted that an estimated $6,000 project to install the new ventilation hood and venting ducts has been cut in half thanks to a donation of personal service.
“We’ll have to pay it in installments, but we’ll get it done. We’ve made it this far,” said Swagerty, who also serves as pastor of Full Gospel Mission, which houses the kitchen in its basement.
The reason Swagerty continues this mission — which has been hurt by theft, equipment failures, reduced donations, and her own health problems — walks through the door six days a week.
“We are now averaging 100 people a day over two and a half hours of serving meals. I don’t think we have had a day where we have not had any less than 60 people per day, even in bad weather. You don’t have to tell me that the economy is bad or that people are struggling. I see it every day, but that is why this kitchen was opened,” Swagerty said.
How does the Kitchen of Hope keep everyone fed? Swagerty does like everyone else, she searches for sales at Kingsport grocery stores and buys in bulk.
“I hit the sales, and we get enough of those staple foods to last us awhile,” she said. “We’ve learned about stretching every dollar till it breaks because we have to spend the rest on upkeep and things we have to do to keep the dining room and kitchen up to standard.”
Never satisfied with resting on her laurels, Swagerty already has identified her next mission — finding a large building in Kingsport that can be a halfway house for women.
“You find all kinds of places that can help a man down on his luck, but not that many for a woman,” said Swagerty.
“I want it to be a place where a woman can have a roof over her head and learn the things she needs to get a job and not have to rely on anyone but herself. I hope I can see that prayer open one day.”
Contributions to the organization can be sent to: Kitchen of Hope, c/o Full Gospel Mission; 740 E. Sevier Ave.; Kingsport, Tenn. 37660.
Posted by douglassriverview at 1:29 AM