Pancake Breakfast Fundraiser: Everybody 'Flipped' Over Our Pancakes 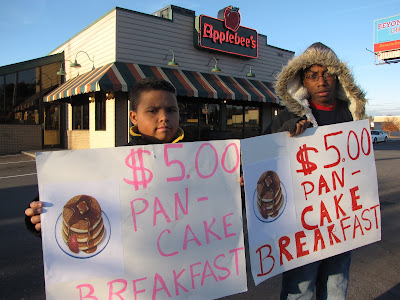 "The Queen Bee was pleased with the Worker Bees who did such a good job at Applebee's."

That was the general feeling that Sons and Daughters of Douglass Alumni President Virginia 'Jenny' Hankins had, after the Pancake Breakfast fundraiser that the alumni group held at Applebee's in Kingsport on Saturday, November 19, 2011.

The event was the first such independent fundraiser for the Douglass alumni association, outside of the Reunions every two years. 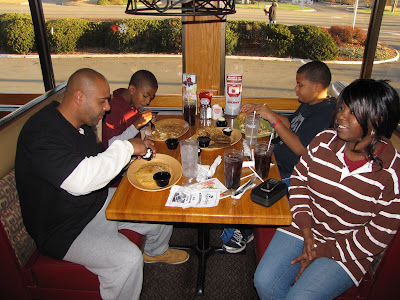 Click here to see a slideshow from the Pancake Breakfast.

"The success of this Pancake Breakfast was a good show of cooperation," Hankins says. "It shows that the Douglass Alumni Association, the 'Sons and Daughters' is still strong. It shows that everybody on the Board is willing to work, even the alumni from out of town. They came and pitched in, rolled up their sleeves, and just dug right in."

While there was plenty of digging in for the workers, visitors who paid a 5-dollar donation, got to dig into some delicious pancakes. 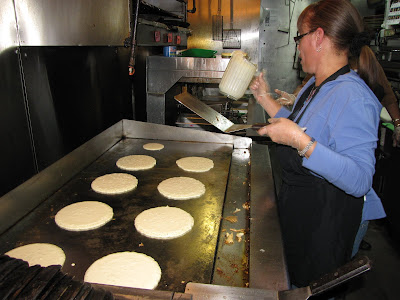 "I probably flipped over 200 pancakes back there," says alumni Vicki (Woods) Smith. "They were mixed pretty good, and they rose up nice and fluffy. Van (Dobbins, Jr.) supplied plenty of sausages, both flat and link) and with the syrup and butter, it made for a good combination."

Hankins was particularly impressed with the New Vision Youth who helped out. Members of the group served as hostesses and waited on tables, with folks who had orders in, getting their pancakes deliveried with a smile and encouragement. 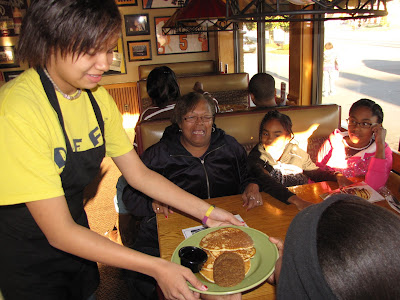 "Johnnie Mae (Swagerty)'s New Vision Youth kids were just phenomenal," she says. "To see them going back and forth from table to table, making sure everybody got their orders and that everybody was fed, was heart-warming. They even helped us by standing out on the street corners with posters they'd made, advertising the event. That brought several visitors in. It was cool that early in the morning, but a couple of them were out there anyway."

"Those kids taught us a thing or two about common courtesy and how to be cordial to people." 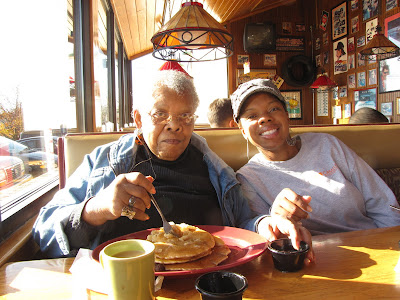 There was a steady stream of traffic all morning at Applebee's.. folks coming in with their pre-sold tickets, others just stopping by to make a donation.

"The Applebee's people were wonderful to us," Smith says. "They were so courteous. I'm sure they're used to working in a confined space anyway and I'm sure we were in the way as they were trying to get their things ready for the 11 o'clock lunchtime crowd, but they were so gracious and helpful. It didn't hurt us at all, but I didn't mind slipping them a couple of pancakes because they were so nice to us."

She recalls meeting one familiar face in the back.

"I ran into a young man named Brian that used to work with my son Ryan at the I-Hop," she says. "I asked him how my pancakes were, he said they were good, and I said 'uh huh.. that's where my son got it from."

Hankins also had lots of praise for the Applebee's management.

"Every time I talked to Tim, the manger," she says, "he was alwasy very helpful. Bobby, who opened up for us, went over everything, showed us where things were, and how to operate things. We had the cooking experience within our group, the assemble, and some of our people even worked in restaurant clean-up, so we knew how to work the dishwashers and things. Everything went very smoothly." 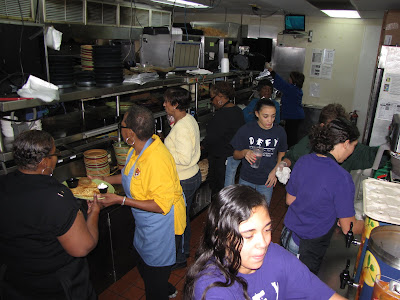 "If you couldn't make the Pancake Breakfast," Hankins says, "you missed a lot of camraderie and good fellowship.. seeing the alumni in the community you hadn't seen in a long time stopping by."

She says, watch for more fundraisers like this in the future. Proceeds from this event "will help supply our office with needed materials we need to administer some of our programs that we'll be contributing to. We want to help the different organizations in Riverview and Kingsport and donate to them.. the New Vision Kids, the programs for senior citizens, different groups."

Although Hankins says everybody was 'busy as little beavers,' it was fun to see the beavers and the 'bees' come together for a good fundraising cause.
Posted by douglassriverview at 6:39 PM