'We Love a Parade - Especially a Christmas Parade" 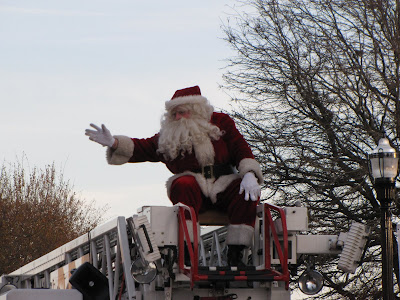 Santa Claus arrived in the usual pomp and circumstance on Saturday, November 19, 2011 that only Kingsport has to offer.

Click here to see a slideshow of the floats, the units and the people of the Kingsport Christmas Parade, 2011.

After all, the Model City is probably the only city in the world where Santa arrives via a rail passenger car, pulled by two diesel locomotives from Shelbiana, Kentucky, through Southwest Virginia, dropping off goodies to the kids along the way, then arrives at the Kingsport depot, and mounts a fire truck in the city's annual Christmas Parade. 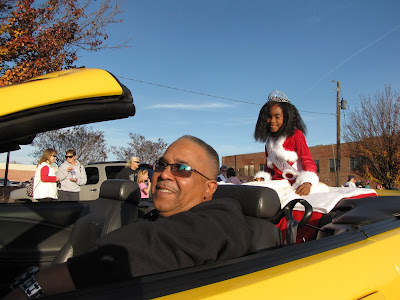 Just like thousands of people lined the tracks of the old Clinchfield Railroad, thousands more lined the streets of downtown to watch and applaud floats, exhibits and parade marchers.

We were also able to catch the Dobyns-Bennett High School Band, just before they took off for the Big Apple to perform in the Macy's Thanksgiving Day Parade.

Like many communities, Kingsport does a lot to bring residents to its downtown, and the annual Christmas parade is no exception.

The Christmas season is officially here. Just remember: Jesus is the Reason for the Season!
Posted by douglassriverview at 1:08 AM