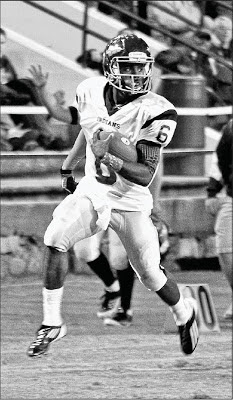 KINGSPORT — Talk about a whirlwind weekend.

Not two days after conducting one of the greatest comebacks in Big 8 Conference football history, Malik Foreman was committing his future — football and career — to Vanderbilt University.

Weekends like that don’t come around often. If at all.

“It feels good. Really good,” Foreman said via phone Monday night. “There was the crazy Science Hill game and then I came down to Vanderbilt on Sunday. What a crazy couple of days.”

It all started Friday night at J. Fred Johnson Stadium, where a Vanderbilt scout watched the senior polymath amass 300 yards of offense — 254 yards rushing, another 55 passing — in the Indians’ stunning 37-34 comeback victory.

How impressed was the scout? So much so that he rang Vandy coach James Franklin immediately following the game and suggested the school get Foreman onto campus as soon as possible.

Thus began an impromptu visit to Nashville where, a few hours after the Commodores’ 49-7 dismantling of Massachusetts on Saturday, Foreman received a formal scholarship offer from Franklin.

Vanderbilt is signing the 5-foot-11, 170-pound Foreman as a wide receiver.

Kentucky extended an offer to Foreman as a receiver as well. Middle Tennessee State, Wofford and UT-Chattanooga also were keen. The likes of North Carolina and Penn State showed interest in Foreman as a defensive back.

But it was Vanderbilt that stole the senior speed demon’s attention from the start.

“I really like Coach Franklin and the coaching staff,” he said. “They treat you like family. I really like where the program is headed, too. I really feel like Vanderbilt will be a national championship contender very soon.”

Plus, the university’s academic standing is second to none.

“You cannot get a better education than what you get at Vanderbilt,” Foreman said. “Football after college isn’t promised, and you have to have a backup play.

“You get a degree from Vanderbilt and you’re set for life if you apply yourself — and I will most definitely. School has always been my No. 1 priority.”

Foreman becomes the Commodores’ 21st commitment for the Class of 2013, and the program’s fifth instate commitment.

As a kick and punt returner — something he said he would like to pursue at the collegiate level — Foreman is averaging 52.5 yards per return with three combined touchdowns.

“This is a great fit, absolutely,” D-B coach Graham Clark said. “Malik’s a great young man and a great student. He’s going down to Vanderbilt, a program on the rise, and will be great for them.

“Plus, he’ll get to listen to B.B. King at least one night a week.”

Foreman plans to make an official visit to campus in January before signing with Vanderbilt on Feb. 6 — National Signing Day.

The focus for Foreman, at least in the immediate, now returns to the field. D-B hosts Bearden on Friday night in the first round of the TSSAA Class 6A playoffs.

“The whole process was pretty nerve-racking, but I’m glad to put it behind me,” Foreman said. “I never lost focus, but this is a big weight off my shoulders.

“Now we can focus on getting a state championship.”

Posted by douglassriverview at 11:02 AM