This story by Bill Lane, Times-News sports writer, is courtesy the Kingsport Times-News. E-mail him at blane@timesnews.net 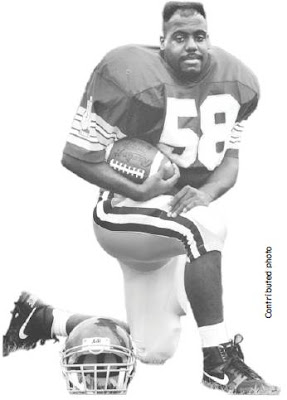 THEN: In 1989, Tennessee High was the fourth-ranked Class AAA football team in Tennessee. Dobyns-Bennett was scheduled to play the Vikings in Bristol but a heavy downpour coming off Hurricane Hugo prompted THS officials to move the game indoors, to ETSU’s Minidome.

Some 10,000 spectators, the largest crowd ever to watch a high school game in that facility, were glad to have a roof over their heads.

D-B’s players appreciated the site change as well. The artificial surface gave them traction they otherwise would not have had in the mud at the Stone Castle. The Indians stunned the Vikings 20-14. At the heart of the upset was a 6-foot, 190-pound nose guard named Major Bristol.

Quickness was his forte.

Coach Ted Wilson preferred a four-man front, but he had a special defensive package — the gap-down — in which he placed Bristol head to head with the center, enabling him to shoot across the line of scrimmage and tackle the ball carrier as soon as the ball was snapped. Bristol made six stops that night, four in the backfield

“When the center moved his hands to hike the ball, I was already going after the quarterback or running back,” he said.

Coming out of John Sevier Middle School, Bristol had been pegged as a prospective high school star. And he was, in two sports. He was chosen the Indians’ MVP in both football and basketball on the freshman teams. In football, he played fullback and linebacker for two years and then started at center. Wilson was big on seniors and two of them played ahead of Bristol when he was a sophomore.

There was no keeping him out of the lineup the next two years. He ran a leg on the 880 relay team, whose best time stood as a Sevier school record for many years. When Bristol was a junior, D-B’s gridders went 10-0 and got ranked No. 1 in the state.

The Tribe had five shutouts and outscored foes an average of 40-6 per game. D-B lost to Morristown West in the first round of the playoffs on a wet field. The Trojans’ star runner was James “Little Man” Stewart, who decided the win with an 88-yard touchdown run. “We had the speed to beat them,” Bristol said. “I wish the game had been postponed.” Bristol was an outstanding AAU basketball player who could score inside or outside. At D-B, he was never allowed to take 3-point shots.

Bristol played in Buck Van Huss’ program two years and has fond memories of that experience. Bristol was surrounded by other young talent in Demar Lewis, Ricardo Hale and Matt Piazza.

Van Huss’ 1988-89 team featured Rick Webster, Tommy Dalley, John Bowles, Hunter Halliburton and Dave Begley, and D-B won the Arby’s Classic that season. A promising freshman, Bristol was promoted to the varsity and got to dress out for the state tournament with them. The Tribe lost in the first round to Shelbyville.

Bristol had some big moments as a sophomore.

A strong rebounder and pesky defender, he beat Patrick Henry of Roanoke, Va., and Sullivan East with clutch free throws. Pivot savvy enabled Bristol to slip around two Sullivan North rebounders for a game-changing putback on a missed free throw. Against Science Hill in the district finals, he personally outscored the entire Hilltoppers team 11-9 in the third quarter.

It was a blow to Bristol and his teammates when Van Huss passed away in June 1990.

“There’s no doubt in my mind we’d have won a state title if Coach Van Huss had lived,” Bristol said. “I can still hear him saying, ‘You can’t play basketball. You couldn’t throw a ball into the ocean.’ ... The last season he coached I noticed a change in him. He spoke individually to each player and told us how good we were.”

Steve Shipley became the new coach and Bristol was chosen as a co-captain. Before the season ended, he became discouraged and quit. He had a heart-to-heart talk with Shipley and was allowed to return to the squad as a senior.

With Hale, Piazza, Lewis, Ryan Wagner, Shane Carnes, Ryan Black, Todd Corum, JaMichael Mills, Jimmy McLain, Fred Smith, Corky Blye and Justin Keeton as his teammates, the Indians were loaded. They played in a platoon system. “We thought we had a state title in the palms of our hands,” Bristol said. “We were ranked No. 2 in the state and 16th in the nation by Hoop Scoop magazine.

“Before the state tournament at Murfreesboro, we had moved to No. 1 in Tennessee. We beat Haywood County, whose top player was Tony Delk (of Kentucky and Boston Celtics fame), by 20 points and then lost to Brainerd in the semifinals.” The Tribe finished with four losses. Two had been to Boone and Science Hill and the other to Brainerd in the Arby’s Classic.

Bristol signed with ETSU for football. He played linebacker all four years and was the overseer on special teams. The Buccaneers had key wins over Appalachian State, Furman and Villanova. The 1996 team, which lost to East Carolina, Marshall and Montana, advanced in the playoffs. “I considered our team to be third best in the country,” he said.

As a redshirt senior he could bench-press 405 pounds. He maxed at 225 pounds with 21 reps. “I didn’t hit the weights very often,” he said. “I got strong by cutting wood. It was a natural thing. I had quick reflexes and didn’t want to get bulky like some of the others. My teammates were amazed at what I could lift.”

Mark Bristol, an older brother, played football for D-B in the early 1980s and had an outstanding career at VMI. 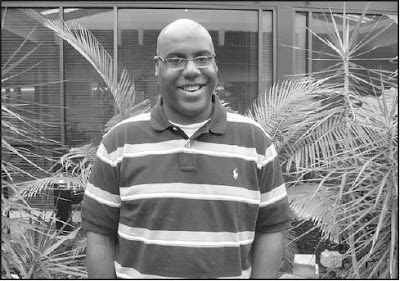 NOW: Bristol and his wife, the former Cassy Scott of Jonesborough, met at ETSU. They have three daughters — Infiniti, Injoi and Indiya. Cassy teaches at Boone.

Bristol, who has lived in Nashville for six years, is in the process of moving back to this area. He is in marketing.

Posted by douglassriverview at 11:53 AM