Father and Son Football: Big Love and Small Love, Too! 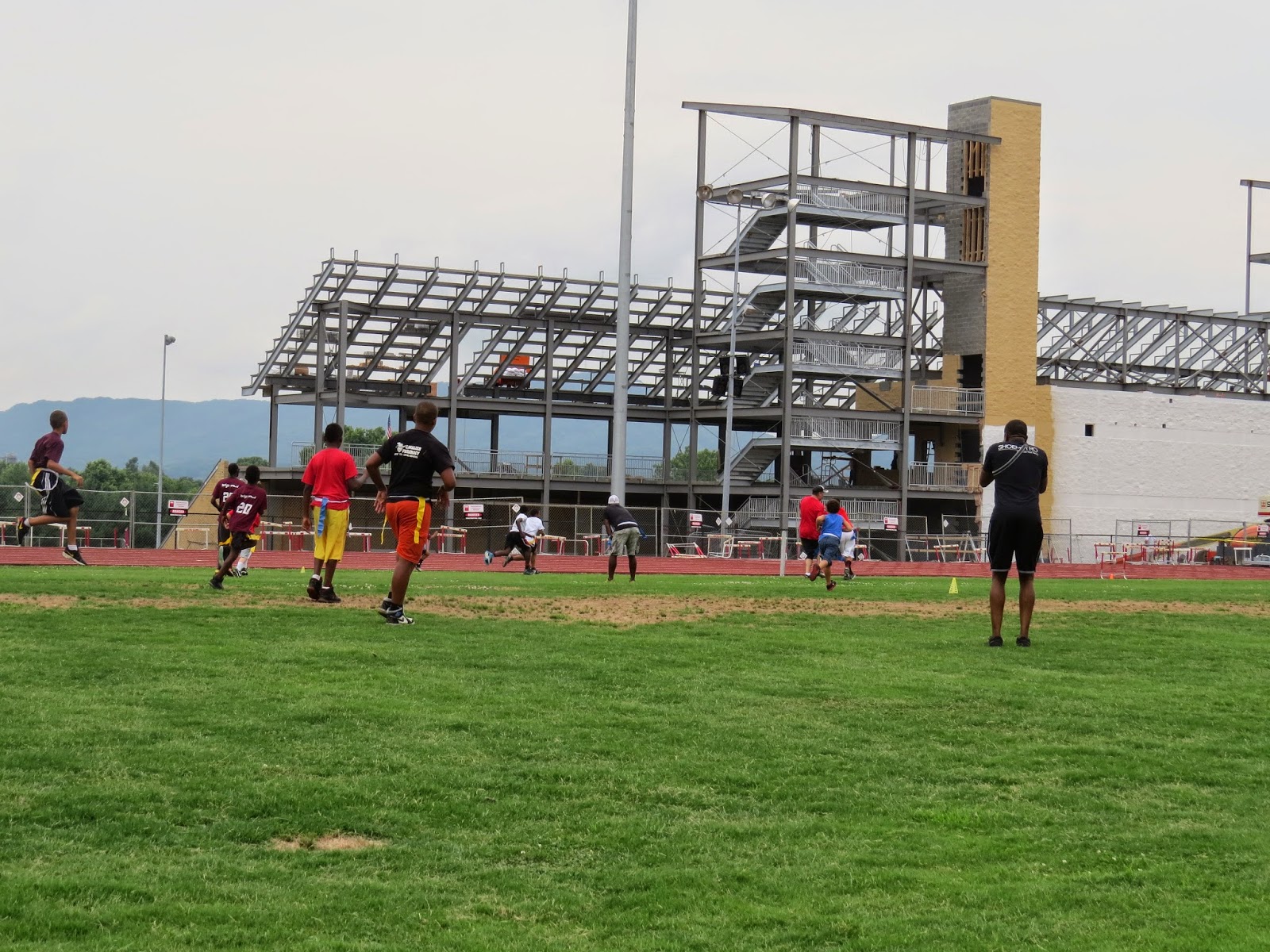 It's just another good, ole-fashioned flag football game.
But when it involves fathers and their sons, it becomes a special event.
This father-son flag football game held in the shadows of the new stadium expansion at Dobyns-Bennett High School in Kingsport, is the brainchild of Fred "Jenko" Smith, formerly of Kingsport, now of Knoxville. Proceeds from today's game will fund the annual Turkey Bowl that Smith puts on, and also help provide a college scholarship to a worthy student next year.
"A couple of years ago, I played in a father-son flag football game in Nashville, me and my son," he says. "We had such a good time that I felt like this would be great that we could bring to the Kingsport area.. get the fathers and sons out, and get them active. Give them a jump start on doing things together."
"It is good for the physical and mental beings of both fathers AND sons." 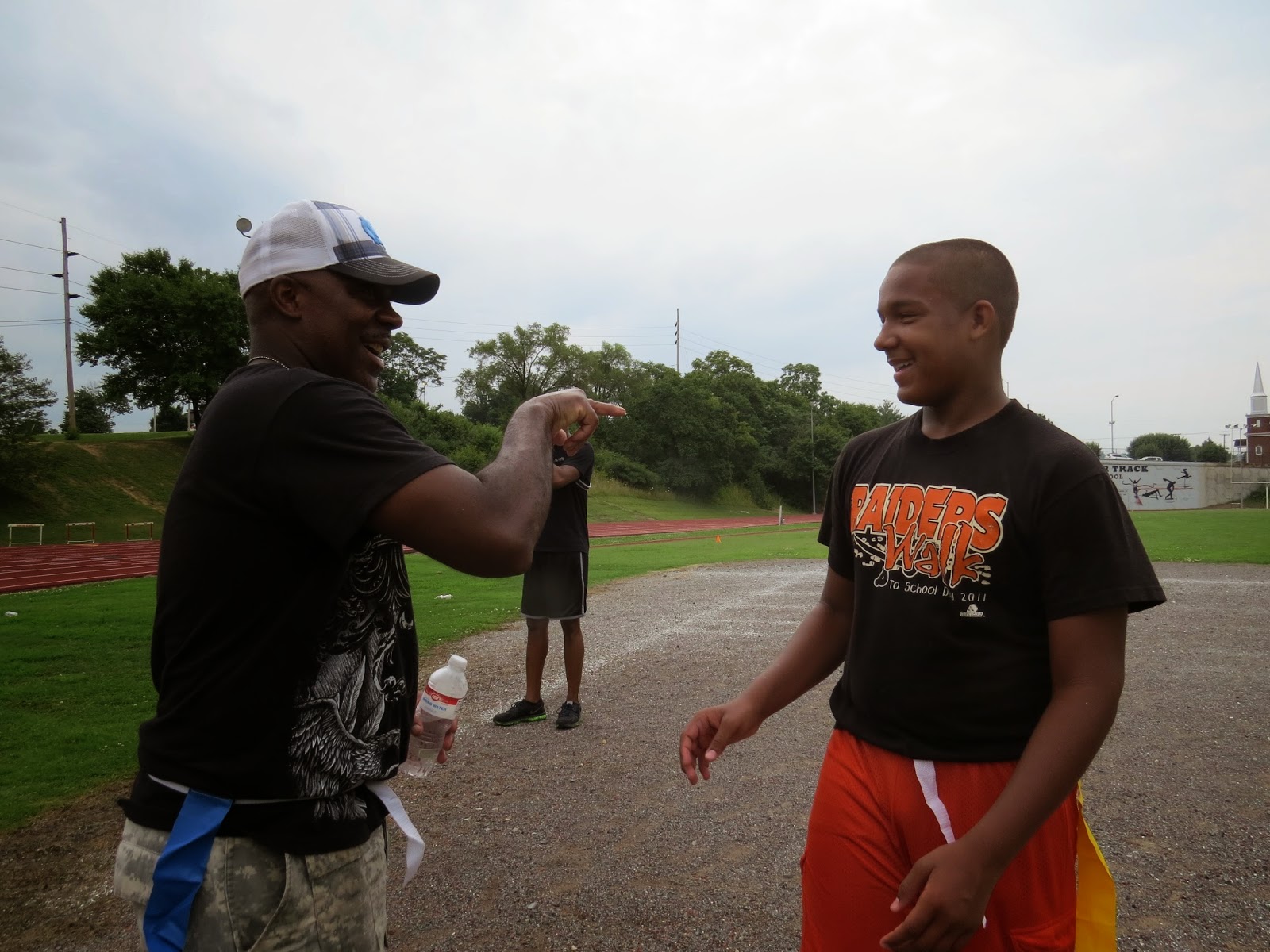 Fathers like Otis Banks, and sons like his, 12-old Jamar Banks. Banks says, when his son first told him about the game, one thought raced through his mind.

"A father-son flag football game.. at MY age?" he laughed. "But I told my son 'it's gotta be fun,' and he really wanted me to do it, plus I knew the other sons and fathers would be there and we'd be playing with people we know. So we decided to do it."
Smith, who brought the wildly successful "DB Alumni Basketball Game" to the Buck Van Huss Dome back in January, says getting fathers to spend time with their sons is important, given today's fast-paced society. 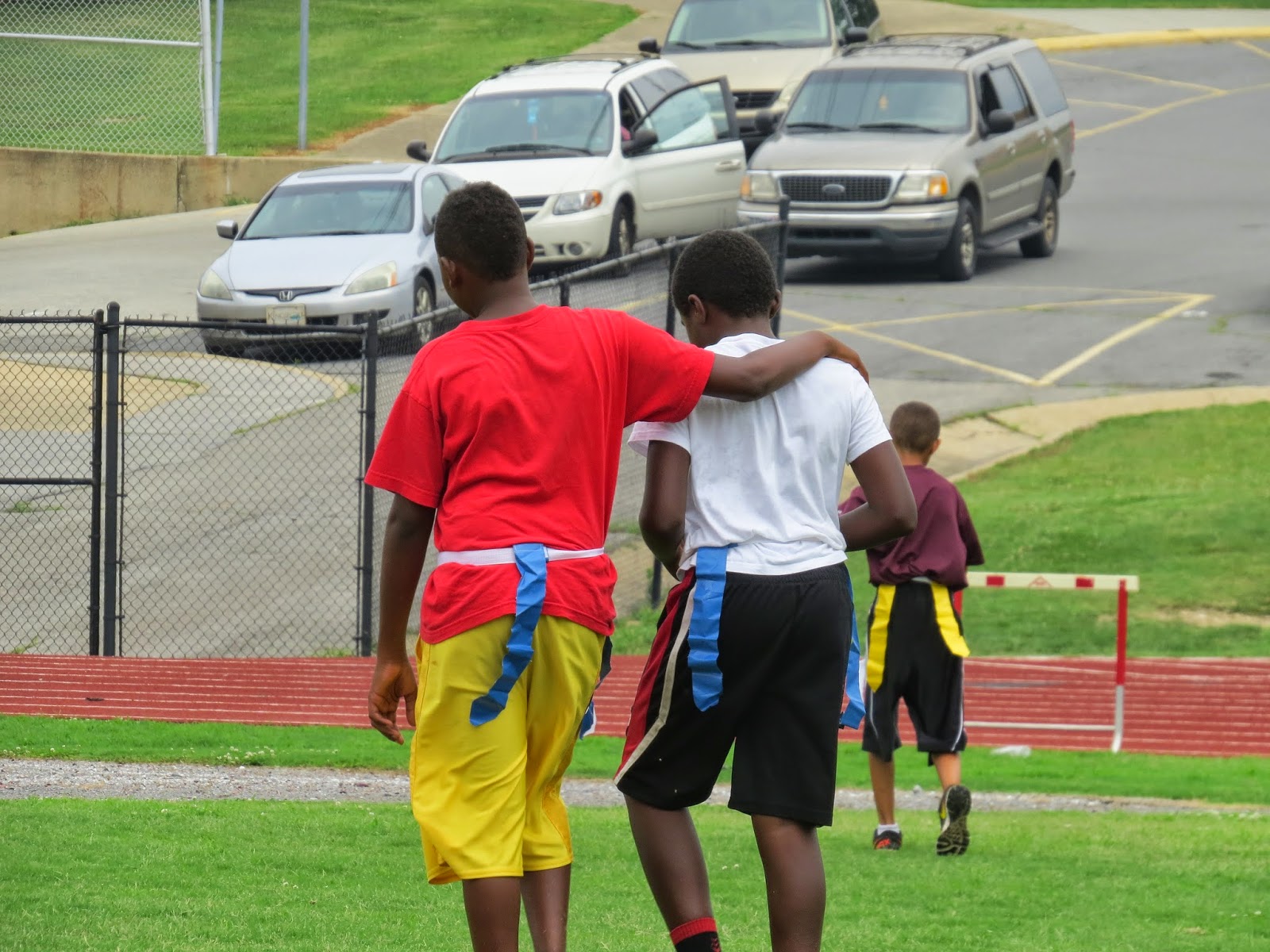 "Growing up in the Riverview community, it took a village," he remembers. "Your parents could send you out and not have to worry, because all the fathers cared for the children. That's the way it was back then. Didn't matter which father scolded you for doing something wrong, they were showing that they really cared for you and your well-being. This event shows kids that somebody still cares. They could be home playing video games. Being out here, benefits both the kids and their fathers in so many ways." 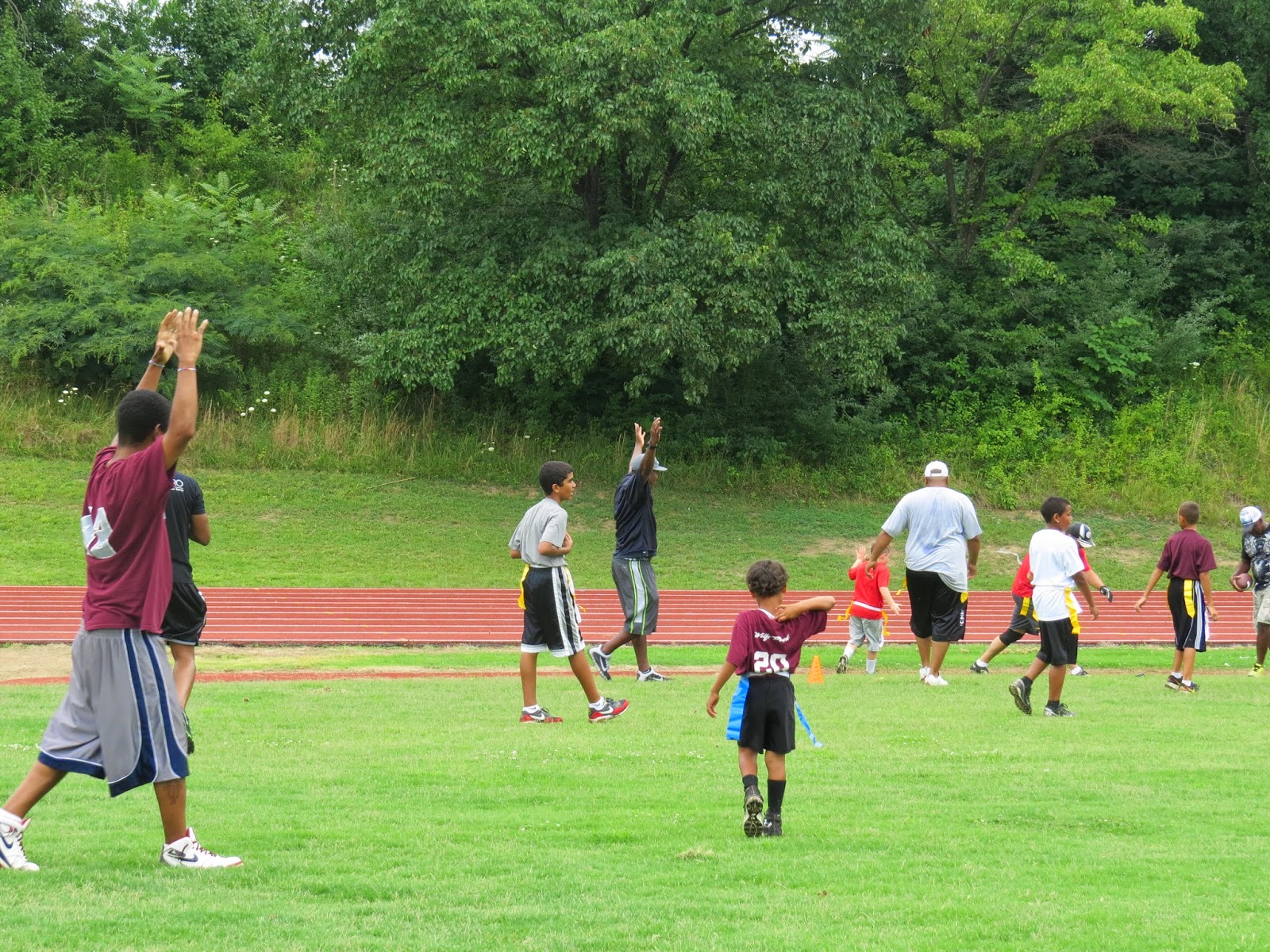 On the gridiron, youth has the advantage.  No doubt about it.   Jamar and his youthful teammates and playmates keep getting their second winds.  The 8th grader is a running back and linebacker for the John Sevier Middle School Warriors. But his father Otis has played football before, too.

Today, it's youth versus experience.

"He's got 3 adults on his team and that's stacked against us," Jamar says. "But we are younger and quicker. It's fun with them out here, but it's also pretty funny. When my dad messes up, I laugh at him and when I mess up, he laughs at me. We're having a good time."


Otis Banks echoes his son's sentiments.
"It's pretty good getting that father-son bond going," he says, catching his breath. "I don't get to see my son for much of the day, and when I get a chance to spend some quality time with him, I'm going to try. I wish there were more dads out here today. It didn't rain, so if they were looking for a reason to stay away, that wasn't it. They don't know what they're missing."
"Take a look around," he says. "Nobody's on oxygen yet." 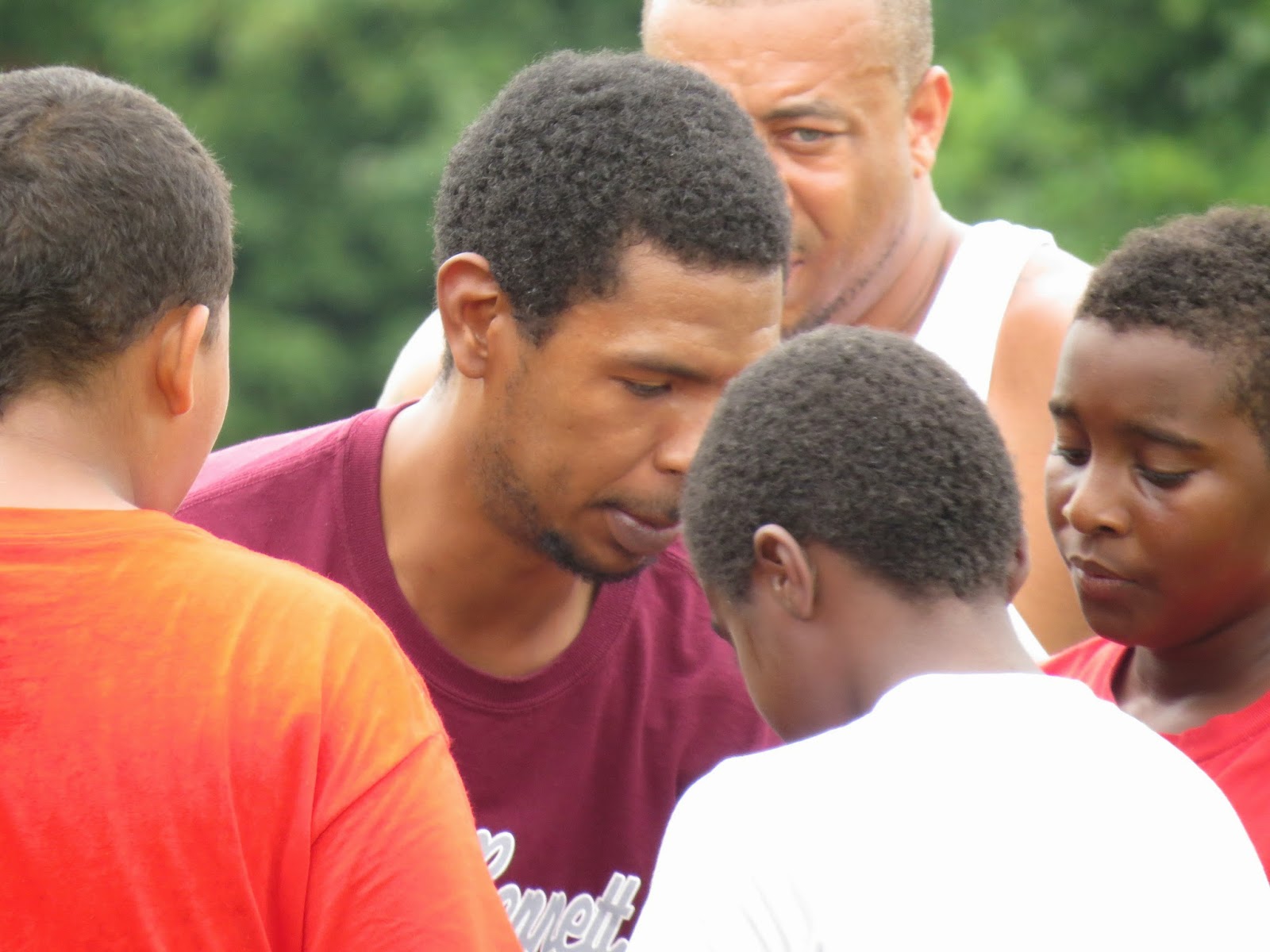 Former DB basketball star Rashad Wolfe says, just being able to participate in the game is a blessing.

"I was raised by a single mom," he says, "and to be out here with my son and my nephew, shows that God is Good. Hopefully, they can see that, as I get older and can't get out as much. When I hang my shoes up in a few years, the younger ones can take up where we left off."
The activity got more sweaty as the score got tighter. After gently needling referee Smith about the accuracy of several calls, Banks and his fellow fathers resigned themselves to the advantages of youth over experience. It's a combination that always goes one way, and one way only.


"The fathers out here are showing their age a little bit," laughed Wolfe. "I think it took a little more work than they thought. I coach a softball team and a T-ball team, but I'll be going home today, eating bananas and trying to get rid of these leg cramps. I think they did well, but the main thing was to get out here with our kids, and spend some time with them."

"A lot of people can't say that, so again.. today was a blessing," he says. 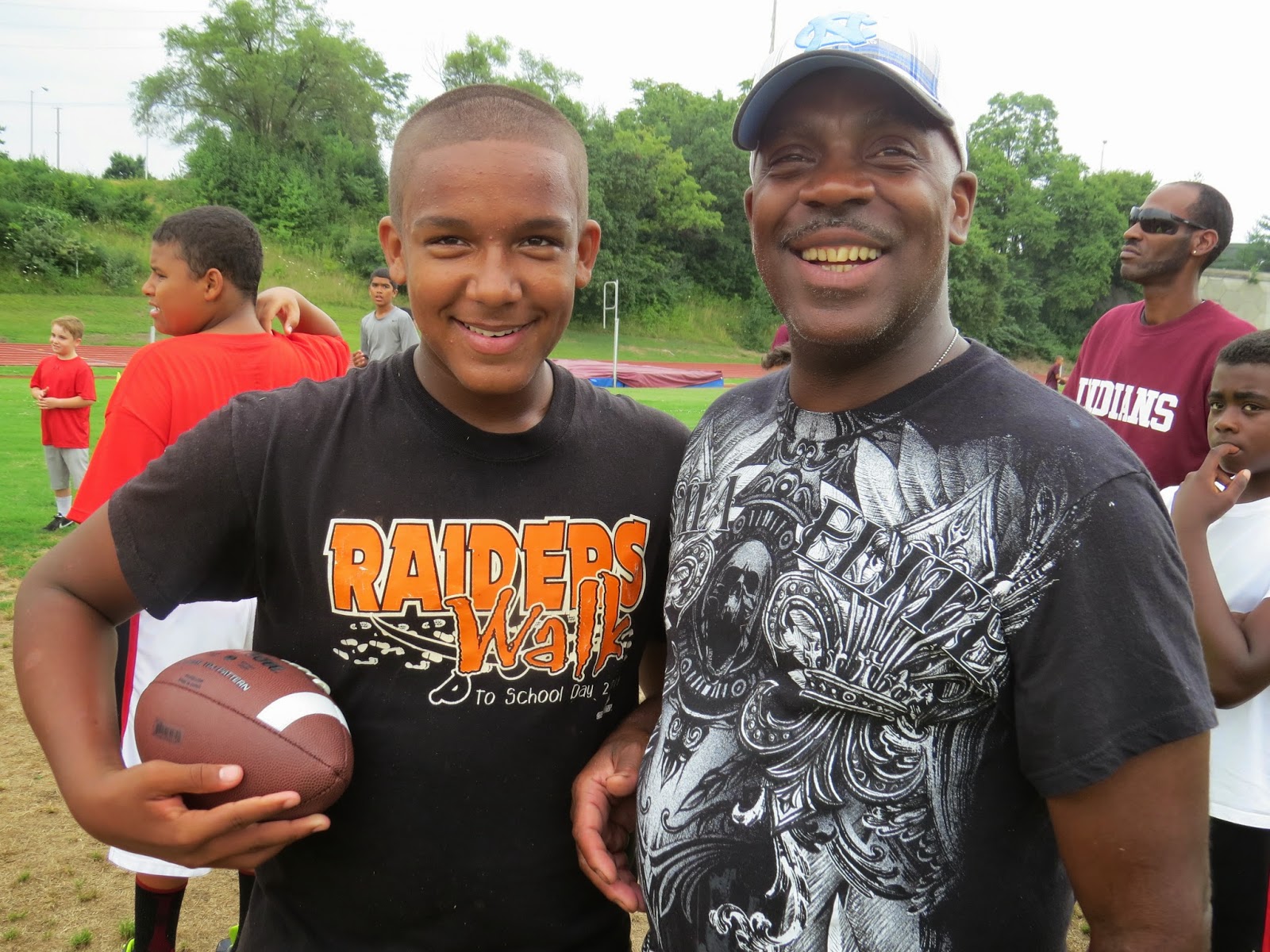 Meanwhile, one father-son team has a stronger bond after today, after some pretty strenuous play on the flag-football gridiron.

"We were able to get out of the house," laughs Otis Banks. "And besides that.. we get to push our kids around."
His son took a more practical view about his father.
"He needs to run faster," he chuckled. "He's out of shape."
And what did father and son talk about on the way home?

"How his team lost," was the very quick reply.
CLICK ON THE ARROWS BELOW TO SEE PICTURES AND ANOTHER VIDEO FROM THE FATHER-SON FLAG FOOTBALL GAME:

Created with flickr slideshow.
Posted by douglassriverview at 5:53 PM