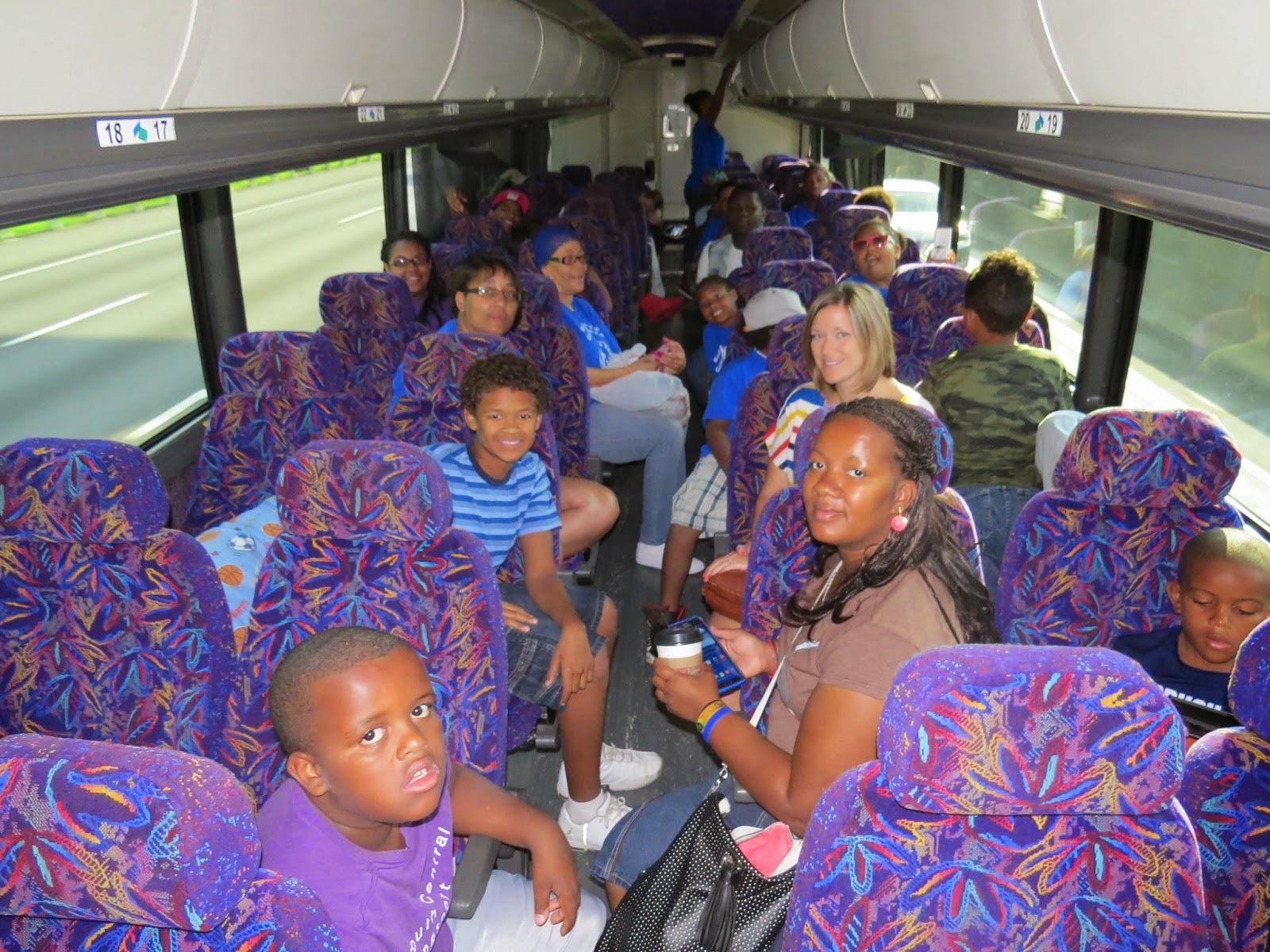 For years in school, members of the New Vision Youth of Kingsport have only read about the dream of the Reverend Dr. Martin Luther King, Jr.
For one weekend in late July, the young people got to live the dream.
Members of the New Vision Youth visited Atlanta from July 24th to 27th, 2014 where they toured the King Library and Archives in downtown Atlanta, and also the Ebenezer Baptist Church where Dr. King served as pastor until he was assassinated on April 4, 1968.
"If it weren't for Dr. King," says New Vision Youth director Johnnie Mae Swagerty, "we as a people would not have the right to travel the way we want, stay where we want, and be who we want to be. We would also not be able to learn the way we want to learn."
"This is one of the trips that these kids needed to take." 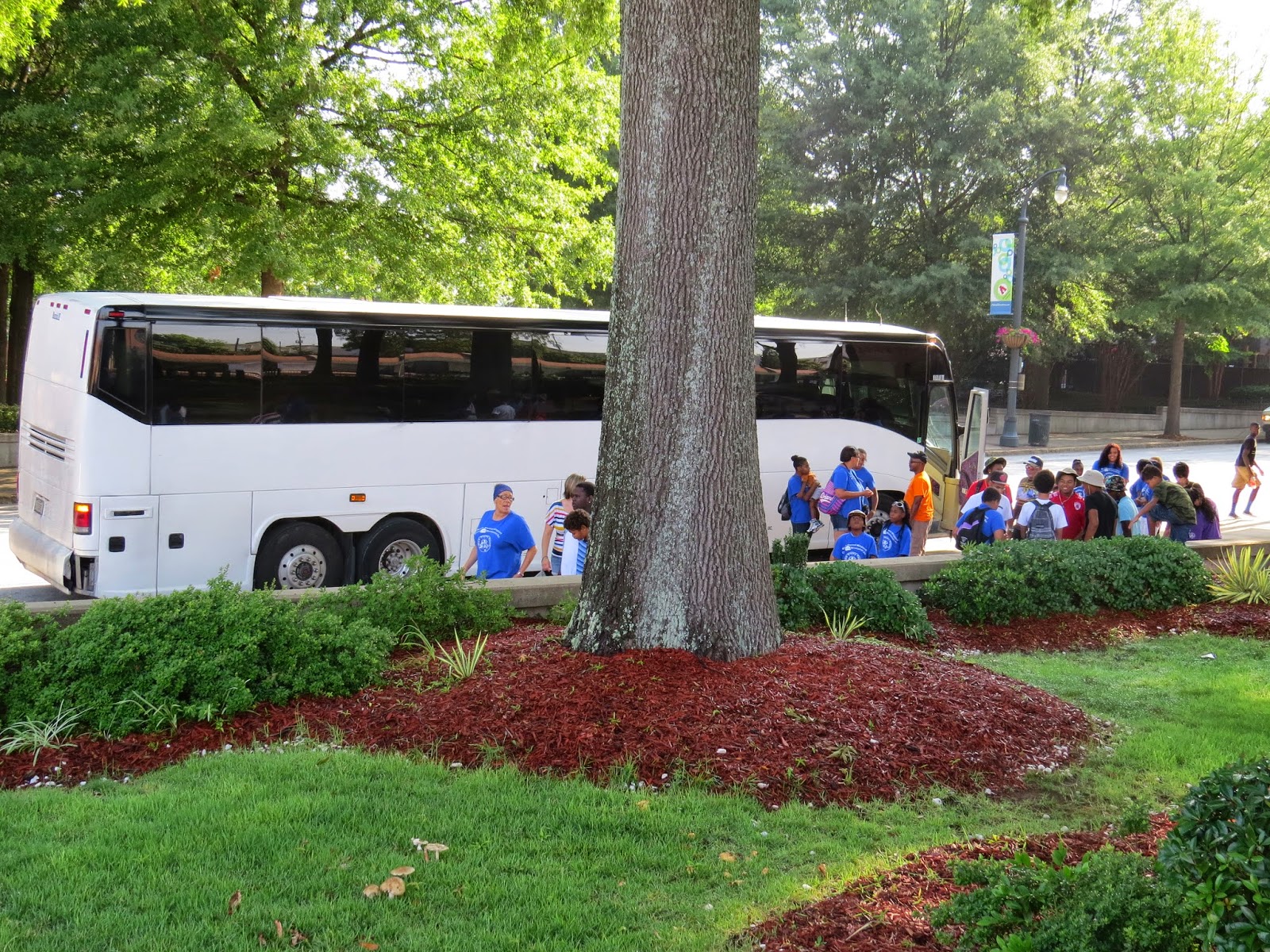 After a big breakfast at the hotel that hosted the group, New Vision Youth members, chaperones and guests, about 50 people total, boarded the Maxwell Coach piloted by Charles "D.D." Maxwell, and took a trip to downtown Atlanta, and the Auburn Avenue community, where Dr. King spent much of his life.
Historically know as "Sweet Auburn," the name "Sweet Auburn" was first coined by African-American civic and political leader John Wesley Dobbs, often referred to as the unofficial "mayor" of the Auburn Avenue neighborhood district in Atlanta. The Auburn Historic District is one of 242 officially recognized neighborhoods in the South's largest city.
Although many of the New Vision Youth reside in the Riverview community of Kingsport, the visit to "Sweet Auburn" opened their eyes to the true meaning of "community." At one point, Auburn Avenue was thought to be the "richest Negro Street in the world, surrounded by the all-black businesss district. 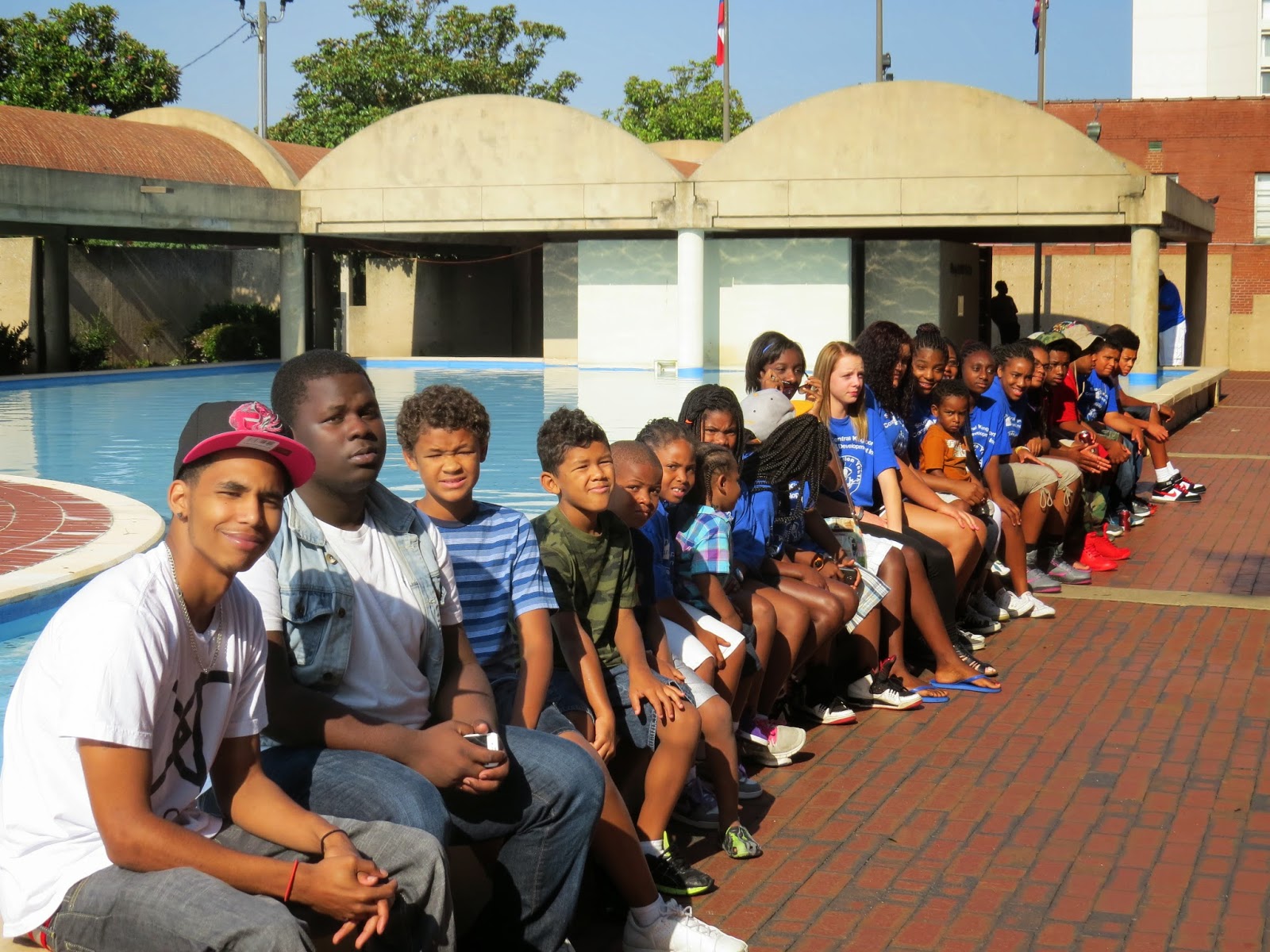 First on the tour for the group was the Martin Luther King Jr. Center for Non-Violent Social Change. Also known as "The King Center," it is said to be "the largest repository of primary source materials on Dr. Martin Luther King, Jr. and the American Civil Rights Movement in the world. Began in 1968 by Mrs. Coretta Scott King, the year of her husband's assassination, the center serves as a center is an informational center for visitors looking for resources on activities and gatherings, particularly those with a Civil Rights background.

JEVONTE LYONS ON THE LEGACIES OF DR. AND MRS. KING


Center personnel told the New Vision Youth that they were among the one million visitors who come to the center, many of them coming to pay respects to the crypts of Dr. King and Mrs. King. After he was assassinated in Memphis, Tennessee on April 4th, 1968, the body of Dr. King was first taken to the Southview Cemetery, an all African-American cemetery in Southeast Atlanta. In 1970, his remains were moved to their current resting place, on a riser in the middle of the King Center's rising polls. When Coretta Scott King passed in 2006, she was interred in a crypt alongside her husband. 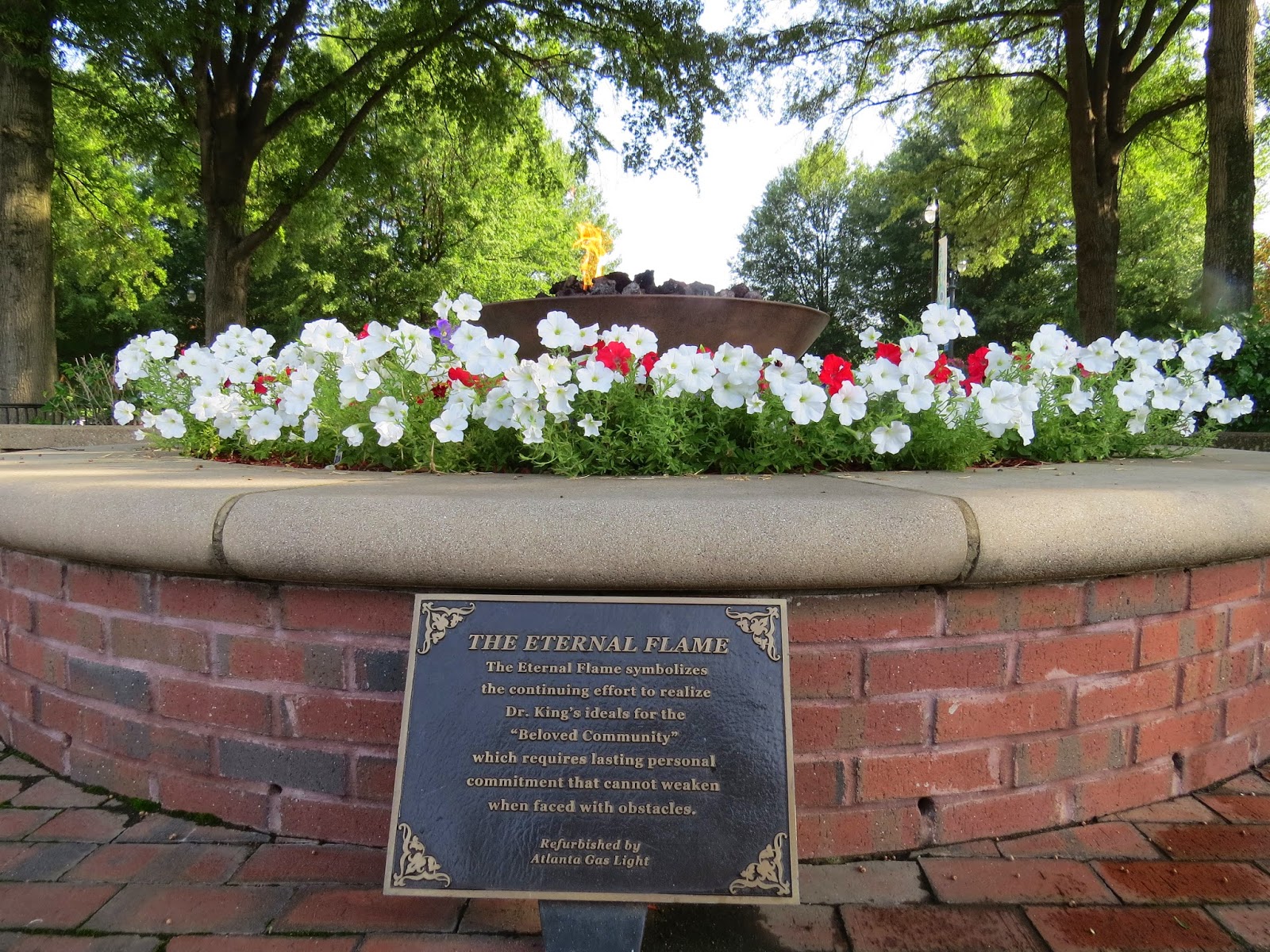 Elsewhere on the grounds of the King Center was the Eternal Flame, which, according to the plaque in front, "symbolizes the continuing effort to realize Dr. King's dream of the 'Beloved Community,' which requires lasting personal commitment that cannot weaken when faced with obstacles." 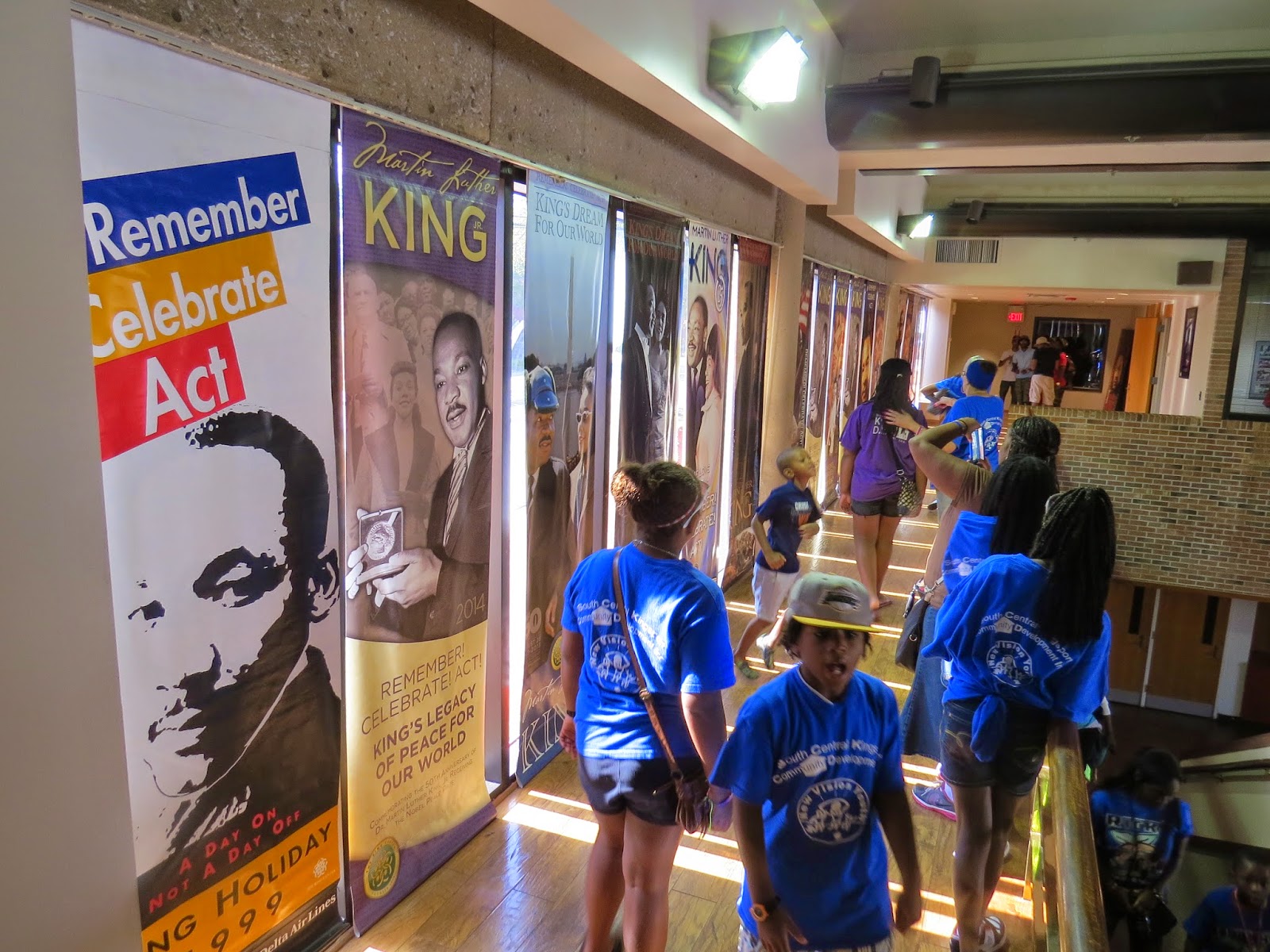 Inside the center, New Vision Youth were witnesses to photos and audio recordings of many activities of the Civil Rights movement that touched the lives of Americans, both black and white. The center was envisioned by Mrs. King to be not just a "dead monument," but a living testimonial to her late husband's teachings and doctrines. Center personnel also say, the building is undergoing a renovation that will update much of the information to a digital format, ensuring its preservation for future generations. 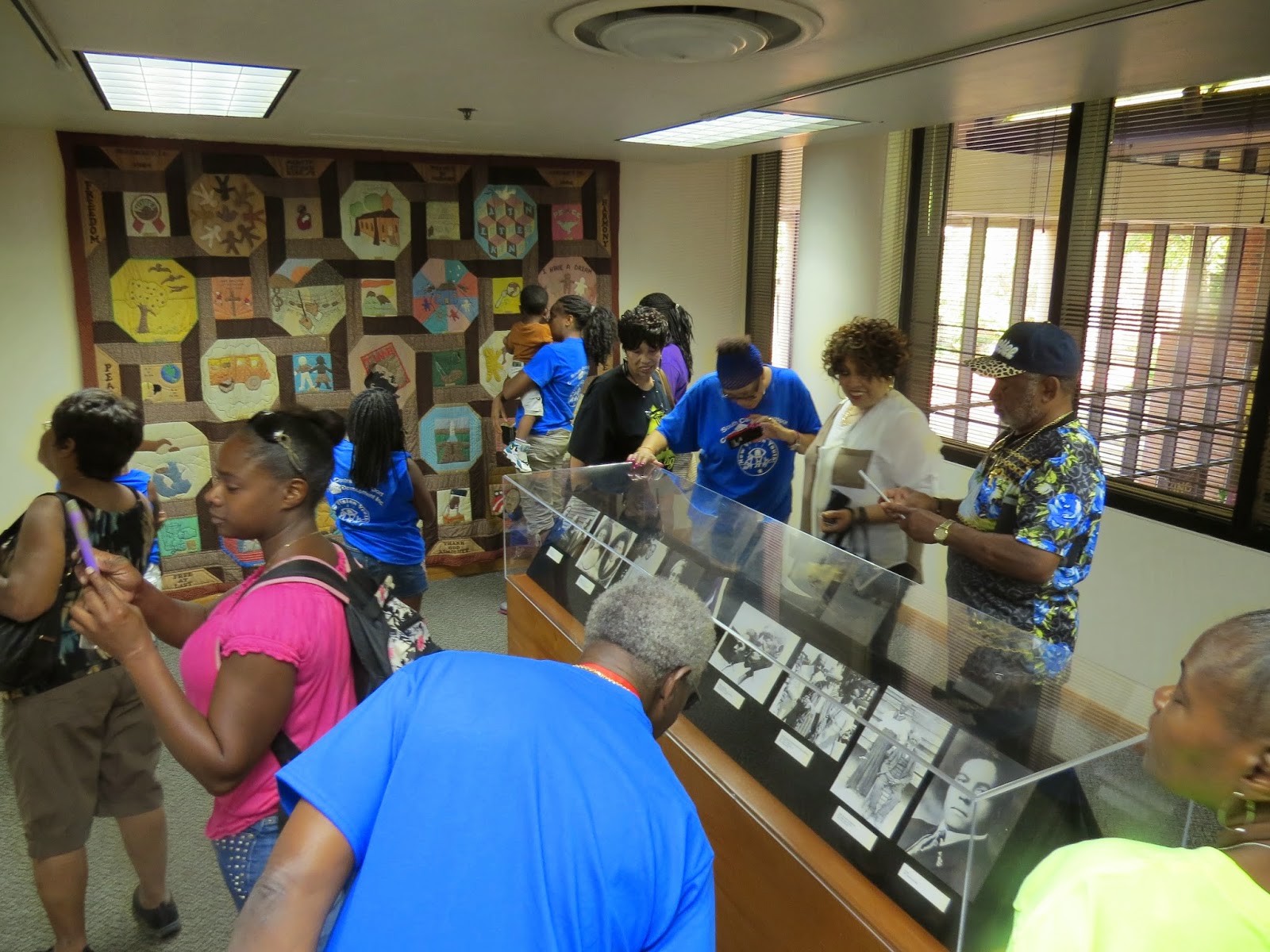 The "I Have A Dream" of Dr. King was not lost on the adult chaperones on the New Vision Youth visit.

"'I Have a Dream' will always be true," says Swagerty. "You can take a little bit of what Dr. King said, and make a lot out of it because the 'civil rights and equality for all people' is still true today. We still have a long way to go, despite many people thinking black people are already there. The center helps us get there by showing us struggles along the way that keep us mindful of the non-violent teachings of Dr. King and his humble beginnings that every black person can identify with." 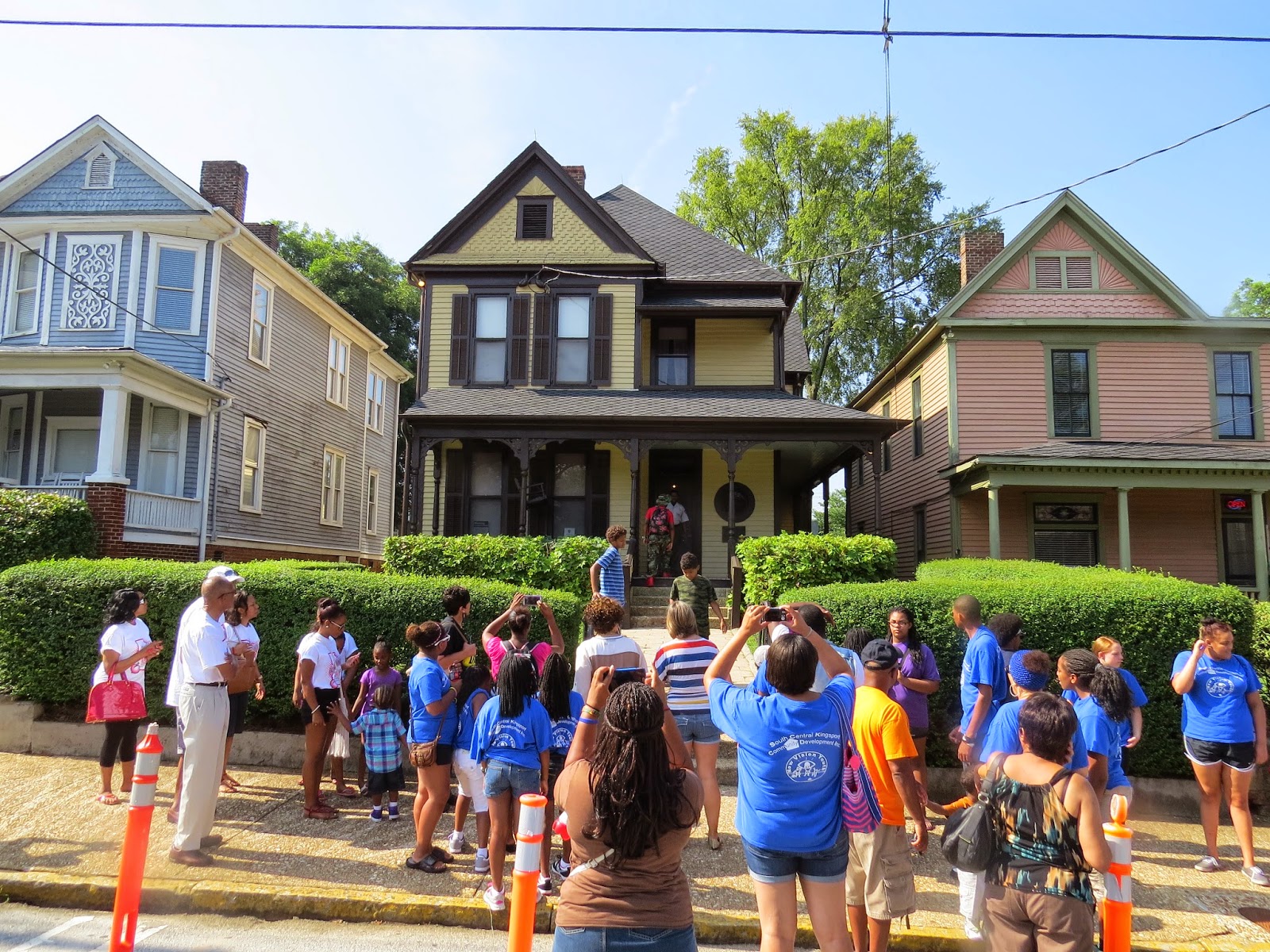 Martin Luther King was born on January 15th, 1929 in this home on Auburn Avenue that is still standing today. Several of the New Vision Youth commented on how much room the house that belonged to his mother's parents seemed to have. When reminded that black families back in the 1930's, 40's and well into the 50's and 60's always hosted more than one family under one roof, visitors, many of them remembering their own family upbringing, could understand why the home must have seemed like a mansion to black families back in the day. For the first 12 years of his life, young Martin was surrounded by his grandparents, his parents (his father a minister), his siblings, other family members and many boarders needing a place to rest their heads.

KEYONNA BENSON TALKS ABOUT THE HISTORY OF THE KING BIRTHPLACE

New Vision Youth members took the tour of the King birthplace with silent reflection, imagining what the home means to African-Americans. The home is owned by the National Park Service, and is governed under the same reverence as the home of President Andrew Johnson in Greeneville, Tennessee and the Great Smoky Mountains National Park. It is a National Historic Site, and is one of several highlights on the tour. An NPS spokesperson conducted the tour for the Youth members, as well as many other visitors who have come to see history. 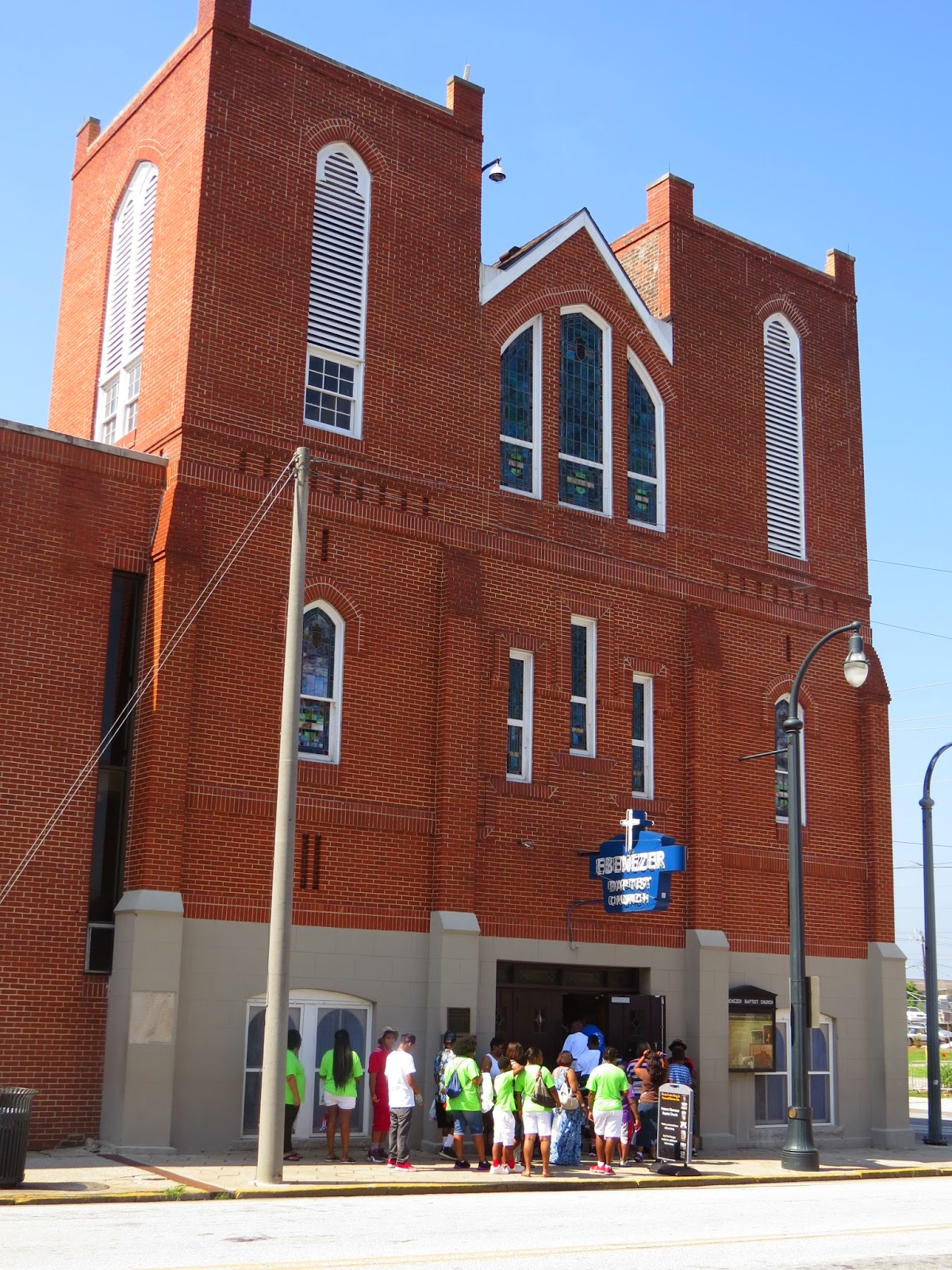 In the heart of the "Sweet Auburn" district, is the historic Ebenezer Baptist Church. Dr. King's grandfather, Reverend A.D. King (who owned the house up the street where young Martin was born and spent his early years) was the church's second pastor beginning in 1893 until 1933. Dr. King's father, Reverend Martin Luther King, Sr. became pastor in 1933, and served as the third church pastor until his retirement in 1975, 7 years after his son was assassinated.


DAVID LYTLE TALKS ABOUT THE HISTORY OF THE EBENEZER BAPTIST CHURCH

Dr. King was pastor at Ebenezer in 1947 until he left to attend the Crozer Theological Seminary in 1948. After ministrial assignments in Alabama, Dr. King was co-pastor of this church along with his father beginning in 1960, but by his own admission, spent little time there during the Civil Rights movement of the 60's.
EXPERIENCE GOING TO CHURCH DOWN AT EBENEZER


During the week, the Ebenezer Baptist Church is a beacon of light for visitors to the King cultural district of Auburn Avenue. They can listen to recorded sermons delivered by Dr. King from the same pulpit in the church that has been renovated and restored to its original appearance from the 1960-68 time period. Among the New Vision Youth visitors, were many older visitors, who remember vividly the struggles of the Civil Rights Movement. The older ones seemed to get a spiritual lift from hearing Dr. King's voice they have heard in person at one point, while the younger visitors were in awe listening to the spirit of the man they have only read about, whose mere presence gave so many millions encouragement back in the day.
CLICK HERE FOR A SUMMARY OF THIS BEAUTIFUL CHURCH'S HISTORY IN ATLANTA 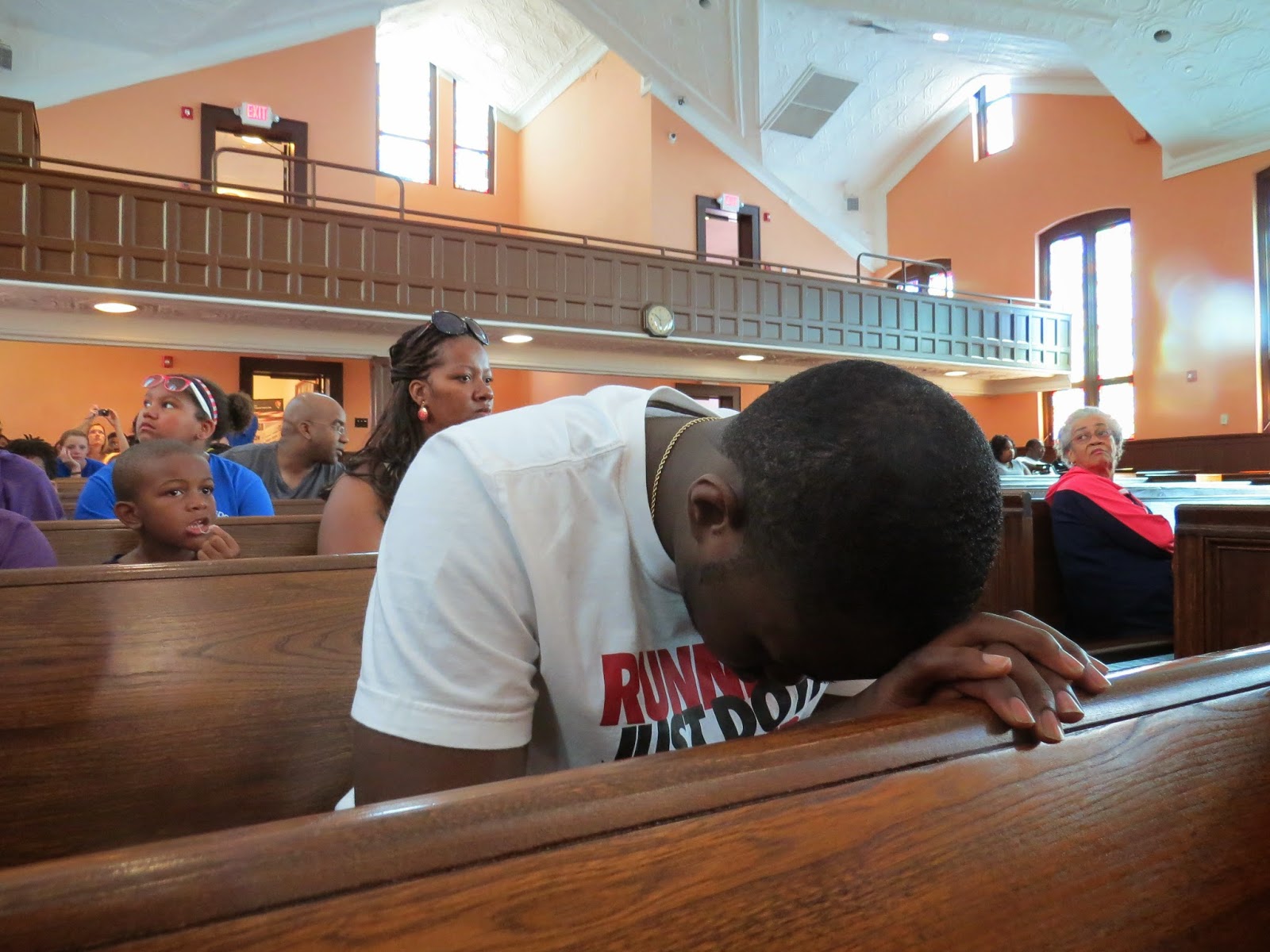 The historic Ebenezer Batist Church still has an active congregation, serving the community even to this day. Sunday School commences at 9:30 AM, with Sunday worship services at 8 A-M and 11 A-M. Special services for the children also begin at 11 AM, and the church Youth Group meets at 11 AM on the third and fourth Sunday's. Wednesday evening church is at 7 PM. 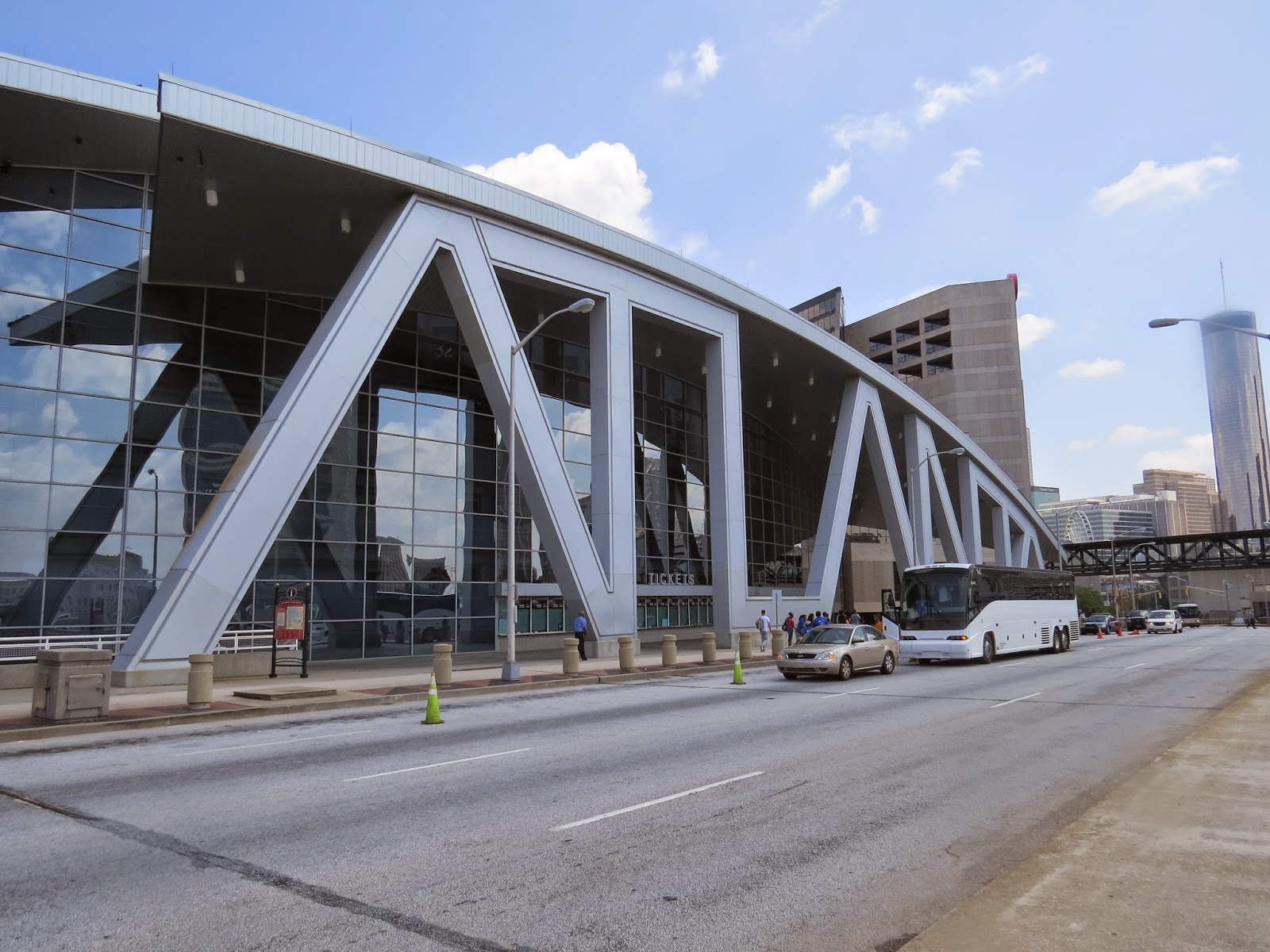 The New Vision Youth was in for a treat for lunch. Guided carefully through the streets of downtown Atlanta, the Maxwell Coach bus passed by numerous big-name stores and hang-outs, passing Centennial Park, built by the Atlanta Committee for the 1996 Olympic Games. The park plays host to millions of visitors a year and several events.


At the Phillips Area, many people don't realize it, but the steel girders in front, actually spell out the word "Atlanta." It takes a little imagination, but the letters can be seen if one looks closely enough. 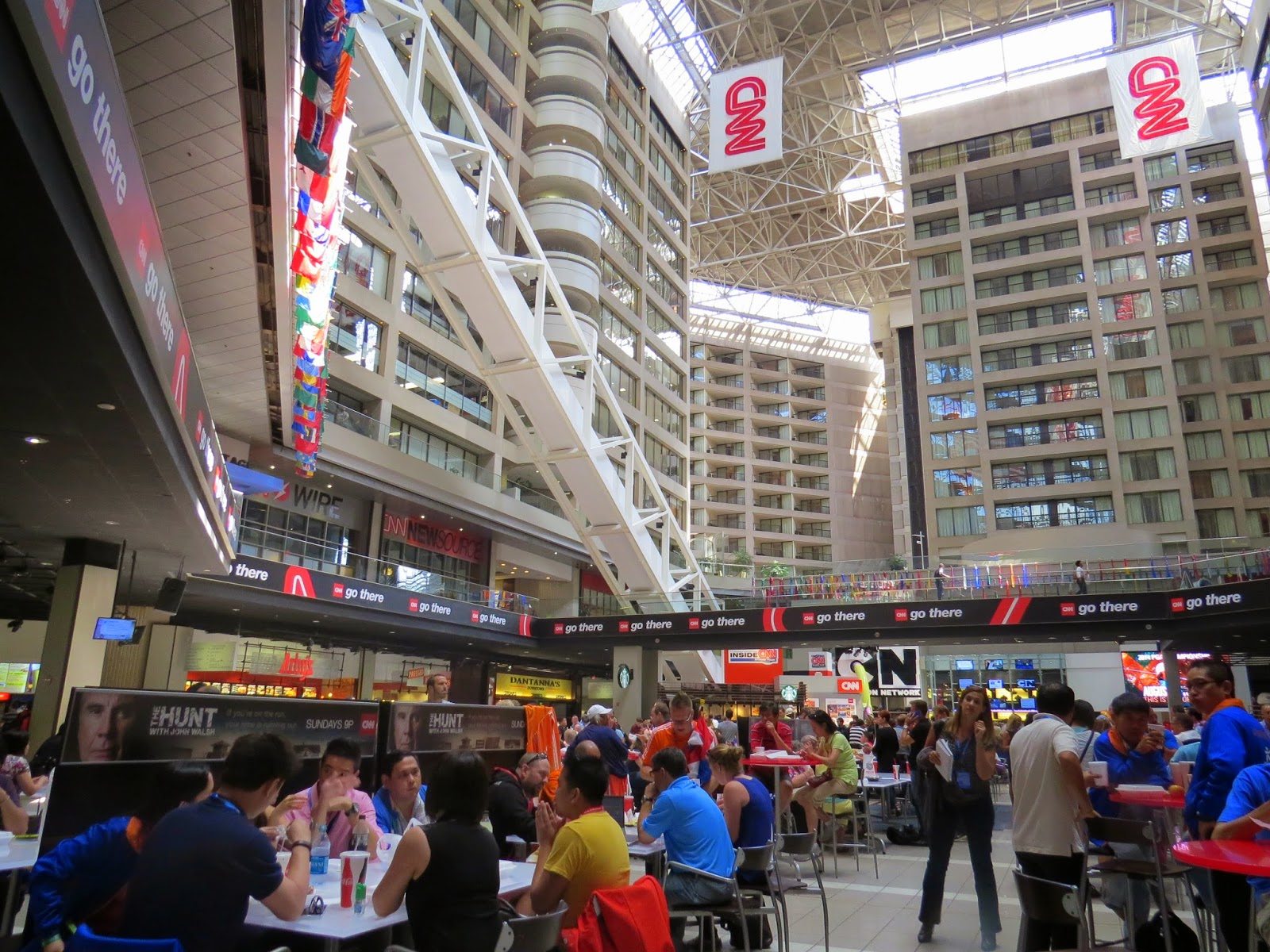 The bus then reached its destination.. the huge complex known as the CNN Center, that houses the news network's world headquarters. But inside the center, is probably its main attraction. 14 fast-food places and 4 restaurants delighted the visitors, which were surrounded by anything CNN.. from the news studios, to the souvenir shops, it's a place where thousands of visitors basically in a nutshell, join downtown Atlanta workers for lunch. Everyone is brought up to day on world events courtesy of several big-screen monitors and loudspeakers scattered around the huge atrium, all set on the main CNN channel. Tours are available at a nominal price, but the New Vision Youth preferred to enjoy lunch in the big atrium. 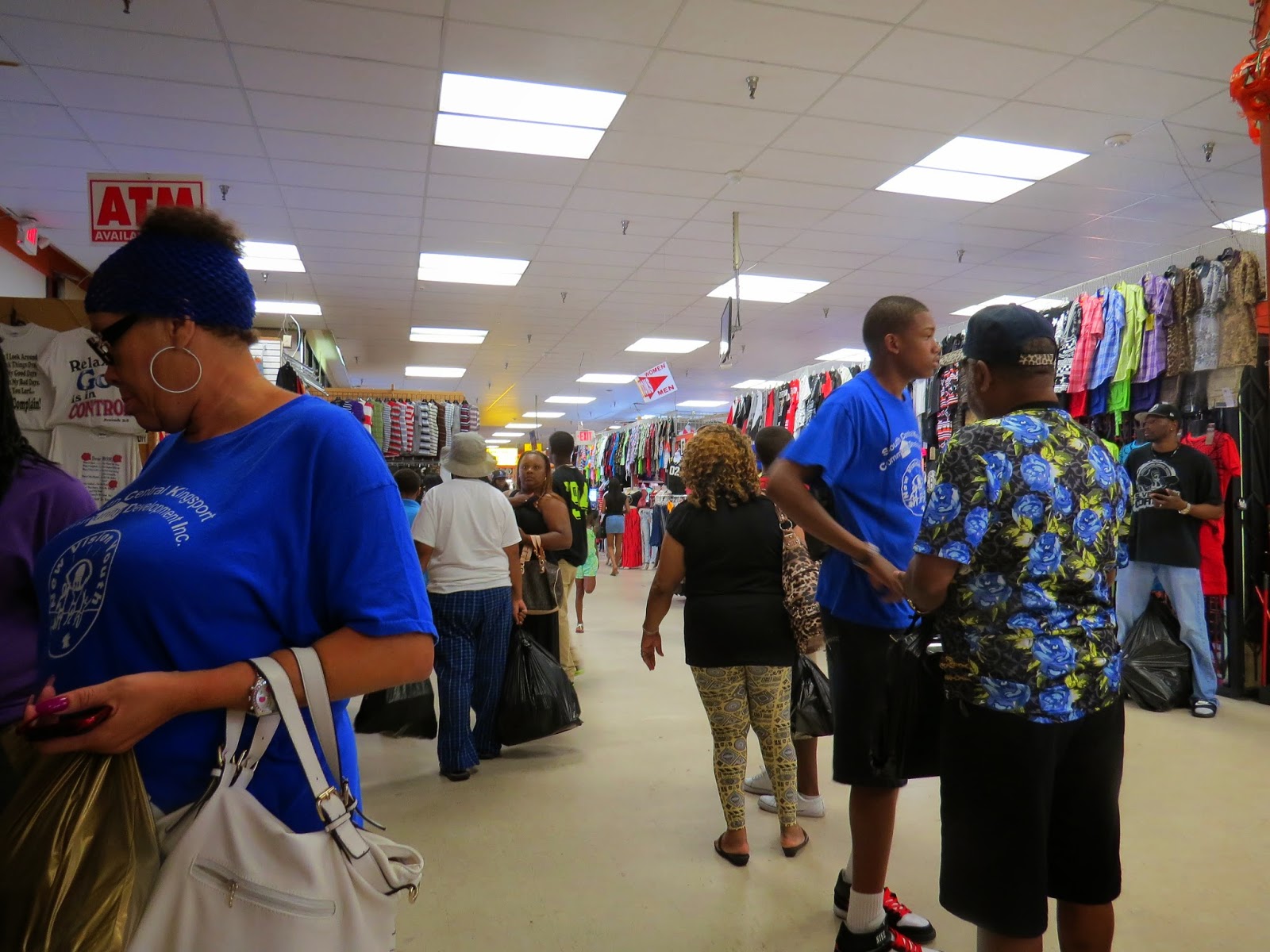 And what would a visit to Atlanta be, without a little shopping?


On the southside of Atlanta, in the predominately black neighborhood, is a little-known shopping complex called the Discount Market on Godby Road. It is housed in what used to be a department store of the K-Mart variety. Inside are individual stalls resembling a virtual flea market atmosphere.. a gathering of people of many nationalities, selling clothes, electronics, shoes, jewelry, trinkets and items not found in major department stores, at prices that are reasonable for what you get.
The result was a shopping paradise.. if you had 10 dollars, you could walk out with 10 different things.
And many visitors did.  What a busy Friday! 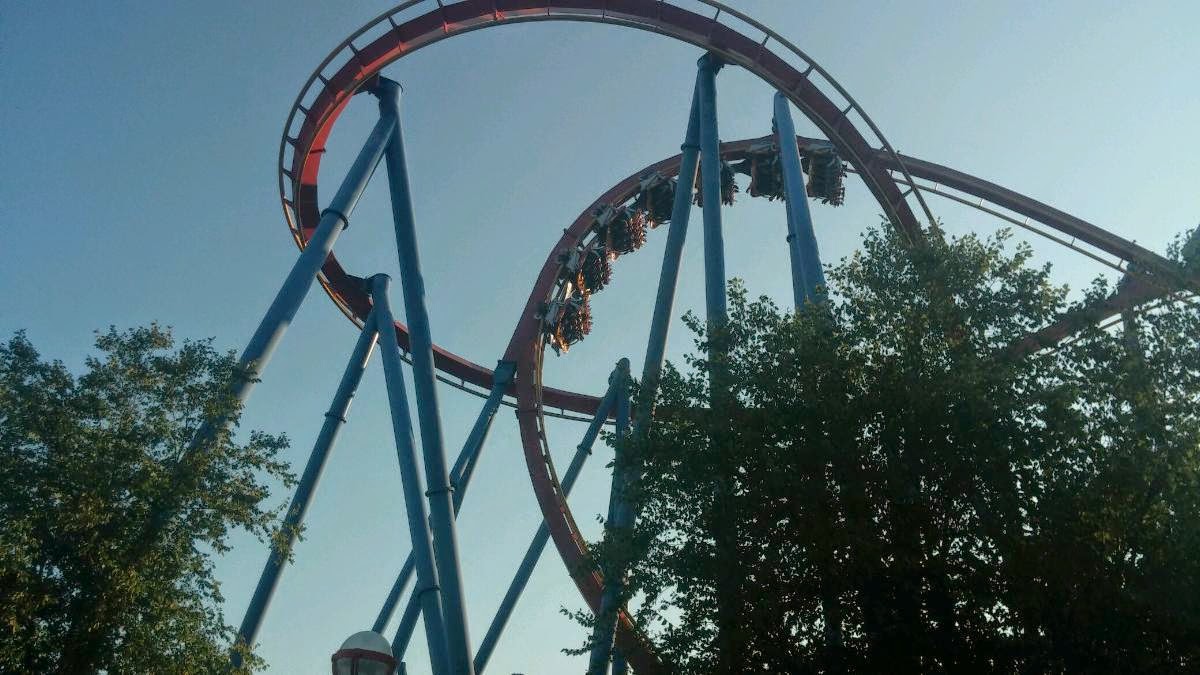 On Saturday, it was on to one of the largest amusement parks in the South.

Way back in 1964, developer Angus Wynne began looking around the country for a location to built a second amusement park.  His first one, Six Flags Over Texas in Arlington, had proven so successful, the amusement entrepreur wanted to spread the fun, while spreading the wealth.  The result was Six Flags Over Georgia, a 366-acre combination of rides, food, water, and other attractions, with a Warner Brothers Studios' theme, feature a cast of characters including Bugs Bunny, Daffy Duck, and the Looney Tunes, along with Batman, Superman, and the Justice League.
The New Vision Youth did what they could, to ride every ride and sample every attraction in the park. 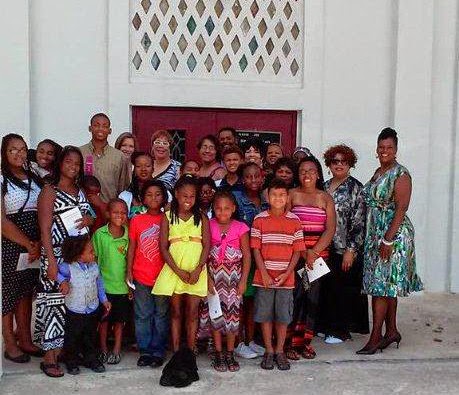 The New Vision trip to Atlanta was indeed a fun one, both educational, spiritual, informative, enjoyable, and economical.. one that the members will never forget.

IF THE SLIDESHOW DOESN'T START AUTOMATICALLY, CLICK ON THE ALBUM TITLE BELOW TO SEE THE SLIDESHOW OF THE NEW VISION YOUTH TRIP TO ATLANTA
New Vision Youth Visit the King Center - Video Maker
Posted by douglassriverview at 11:42 PM