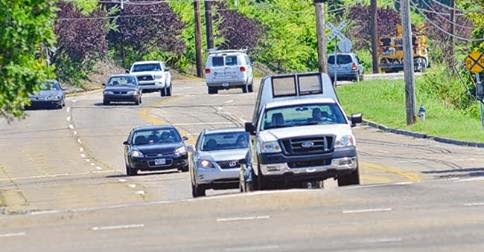 KINGSPORT — The summer of paving is not quite over yet.

Michael Thompson, assistant public works director, said the repaving of Lincoln Street from the John B. Dennis Highway to Sullivan Street has begun.

The $1.1 million project will include milling, paving, some curb replacement and handicap ramp upgrades — some of the ramps are not up to current standards. Thompson said there will also be some spot repairs along the stretch of road.

"It's pretty much a straightforward paving job," Thompson said.

The number of travel lanes will stay the same on the 1.7 mile stretch of road and the caution light at the railroad crossing will remain. No bikes lanes will be added and no road diet imposed.

"Nothing new. Just replacing what was there," Thompson said.

The project is funded 80 percent by federal money and 20 percent by local match from Kingsport. Summers-Taylor Inc. is performing the work.

Thompson said the contract for the project is for 60 days, ending Nov. 7, with most of the major work taking place between 7 p.m. and 6 a.m.

But there is one thing the city would like the public to understand about the Lincoln Street paving project.

It is not going all the way to Wilcox Drive.

"We're going to stop where the Sullivan Street extension comes out, because (the Tennessee Department of Transportation's) project is going to pave the rest of that," Thompson said. "We didn't want to waste the taxpayers money by paving it and then having to tear it up and redo it."

TDOT plans to reconfigure the intersection of Lincoln Street and Sullivan Street in connection to Eastman Chemical Co.'s "Project Inspire" reinvestment plan. Essentially, the intersection will open up a new entrance to Eastman's new corporate business center currently under construction.

Thompson said the repaving of this section of Lincoln Street will be one of the last parts of the intersection redesign and as such will not be repaved until next year.

The Lincoln Street project was originally planned for repaving two years ago (along with a section of Cooks Valley Road), but due to higher than expected bids, the work was stymied. The Cooks Valley work was then pulled out and done earlier this year.
Posted by douglassriverview at 10:22 PM