"Lost in Riverview" - Traffic Jam Has Visitors Looking for a Bypass 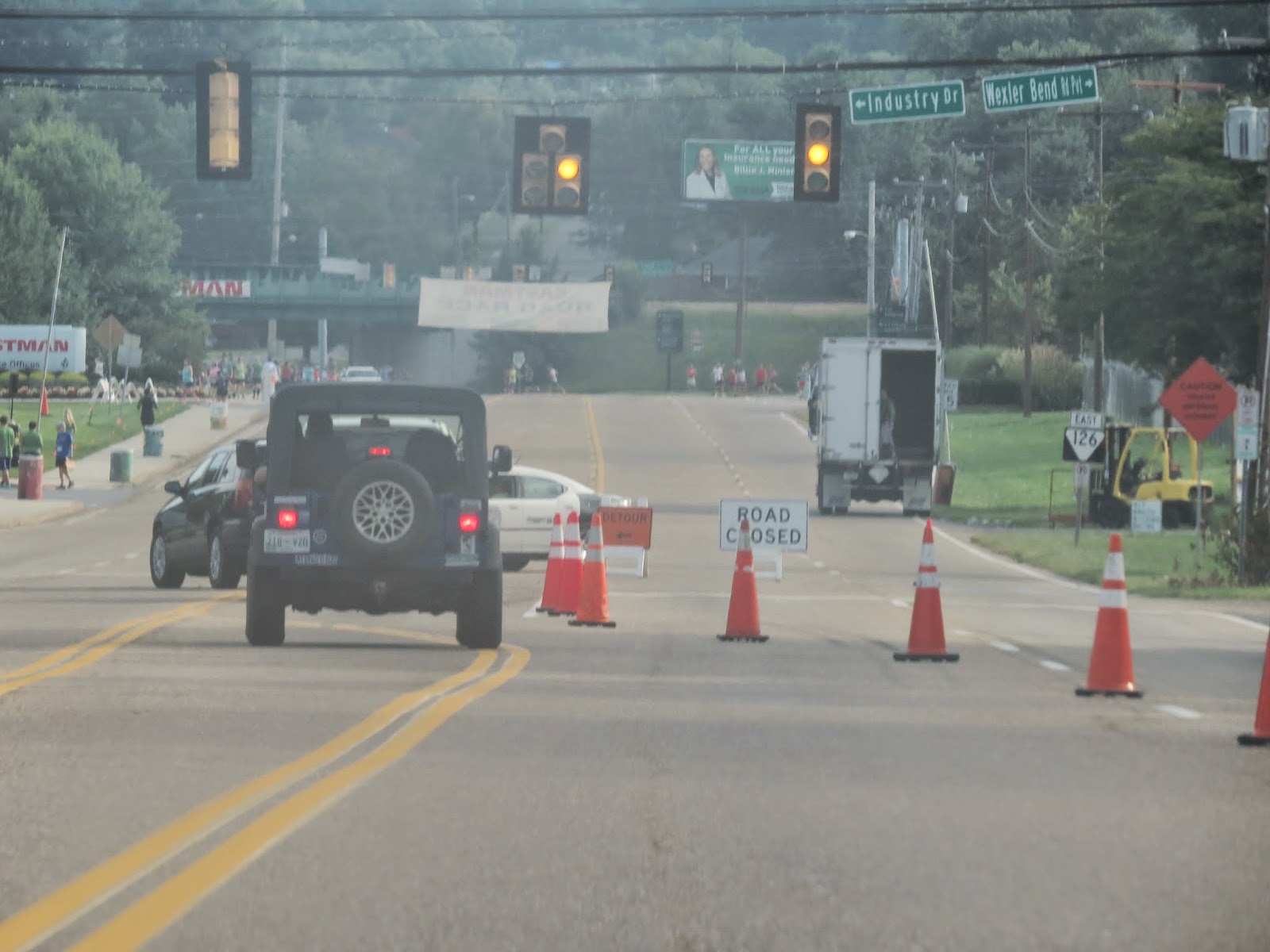 On the warm late summer morning of Saturday, September 6th, Levi Abernathy was northbound on Wilcox Boulevard in Kingsport. He was headed to the Stone Drive area.

As he crossed the Holston River at Eastman, he saw that the road was blocked ahead at the Industry Drive stop light.

"It was kinda like, a surprise stop," he says. "I saw the cop standing outside his car there, and he was like 'you gotta get off this road." 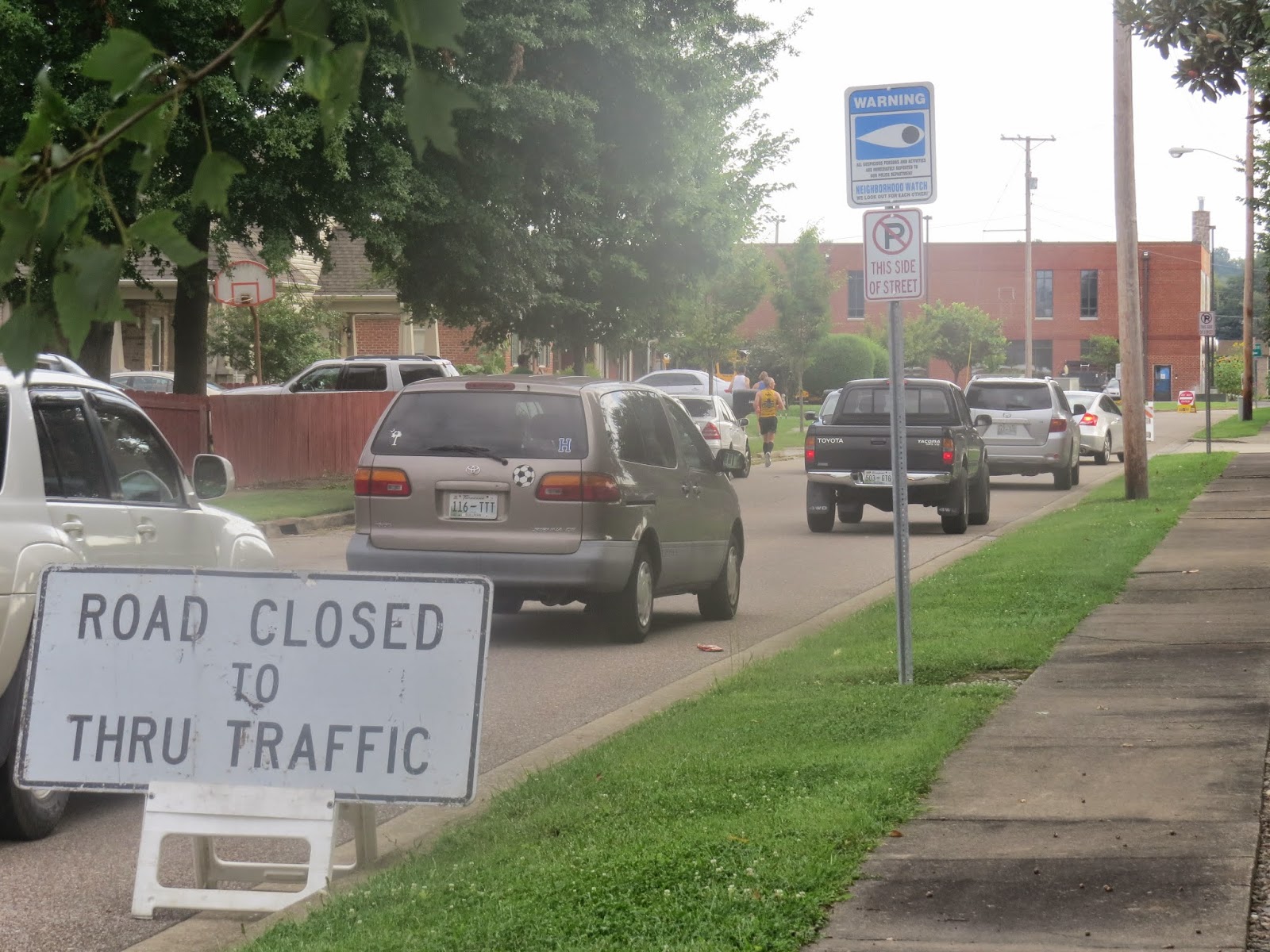 As Abernathy turned left onto Industry Drive, he did not see a lot of traffic down Wilcox, so, figuring he could just bypass whatever was ahead, Abernathy took the first right he came to, hoping to go around whatever was on Wilcox and get back to the Sullivan Street intersection.

The first road he came to and turned right on, was Wheatley Street. "Everybody else was turning onto Wheatley, so I just followed them."

At that moment, Abernathy became "lost in Riverview." The event he wanted to bypass was the annual Eastman Road Race that started and ended at Wilcox and MLK/Lincoln Street.

And he wasn't the only one lost that Saturday. 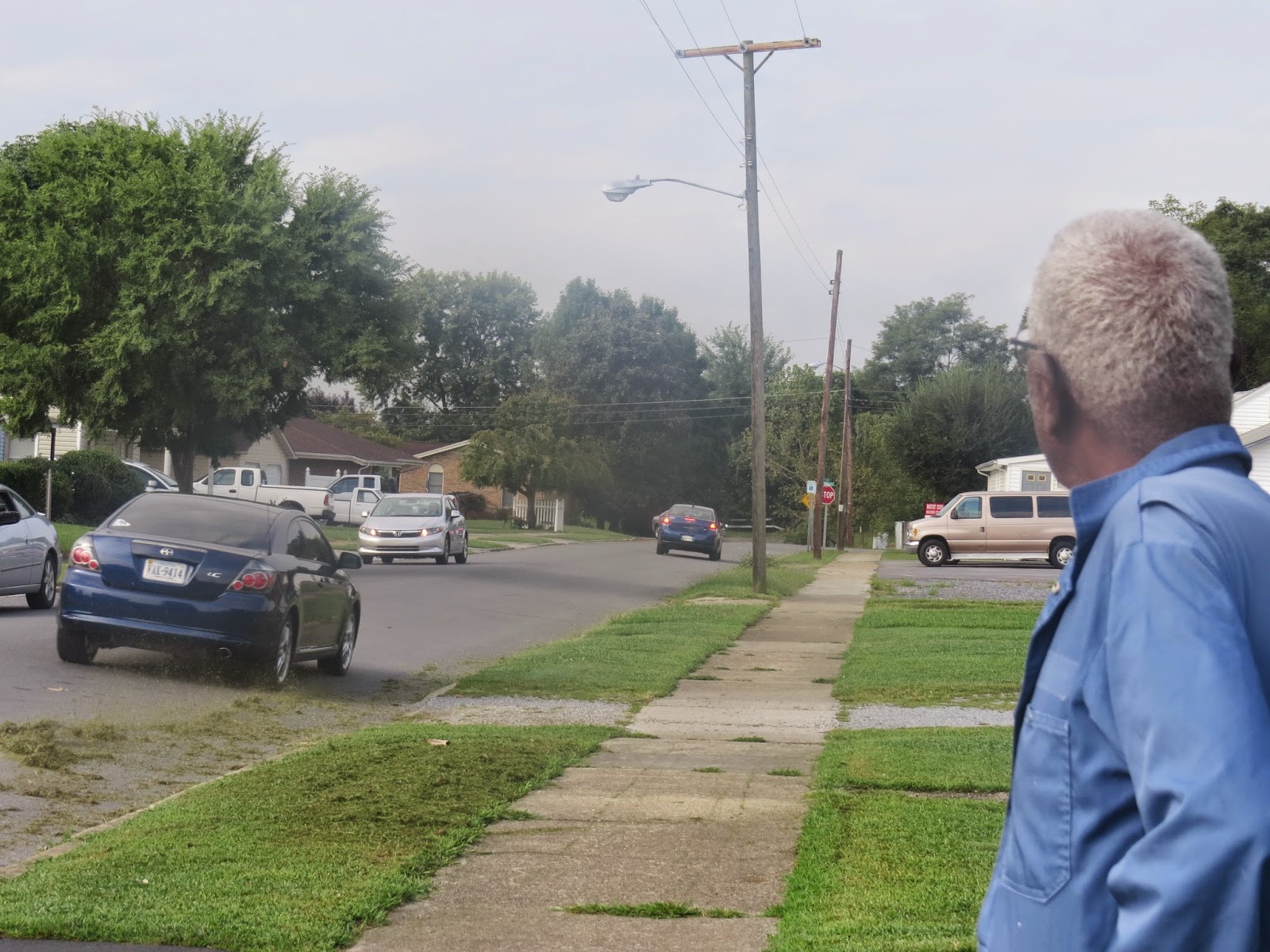 "Look there," Riverview resident Jack Pierce pointing to a blue car driving by on Louis Street. "That car has never been to Riverview before. I don't recognize the car or the driver. It's never been here before. I've seen dozens of cars coming through here this morning, and none of the people live here. (The) V.O. Dobbins (Complex) is closed today.. nothing going on except the Eastman run. People not wanting to go to the race are getting trapped in Riverview." 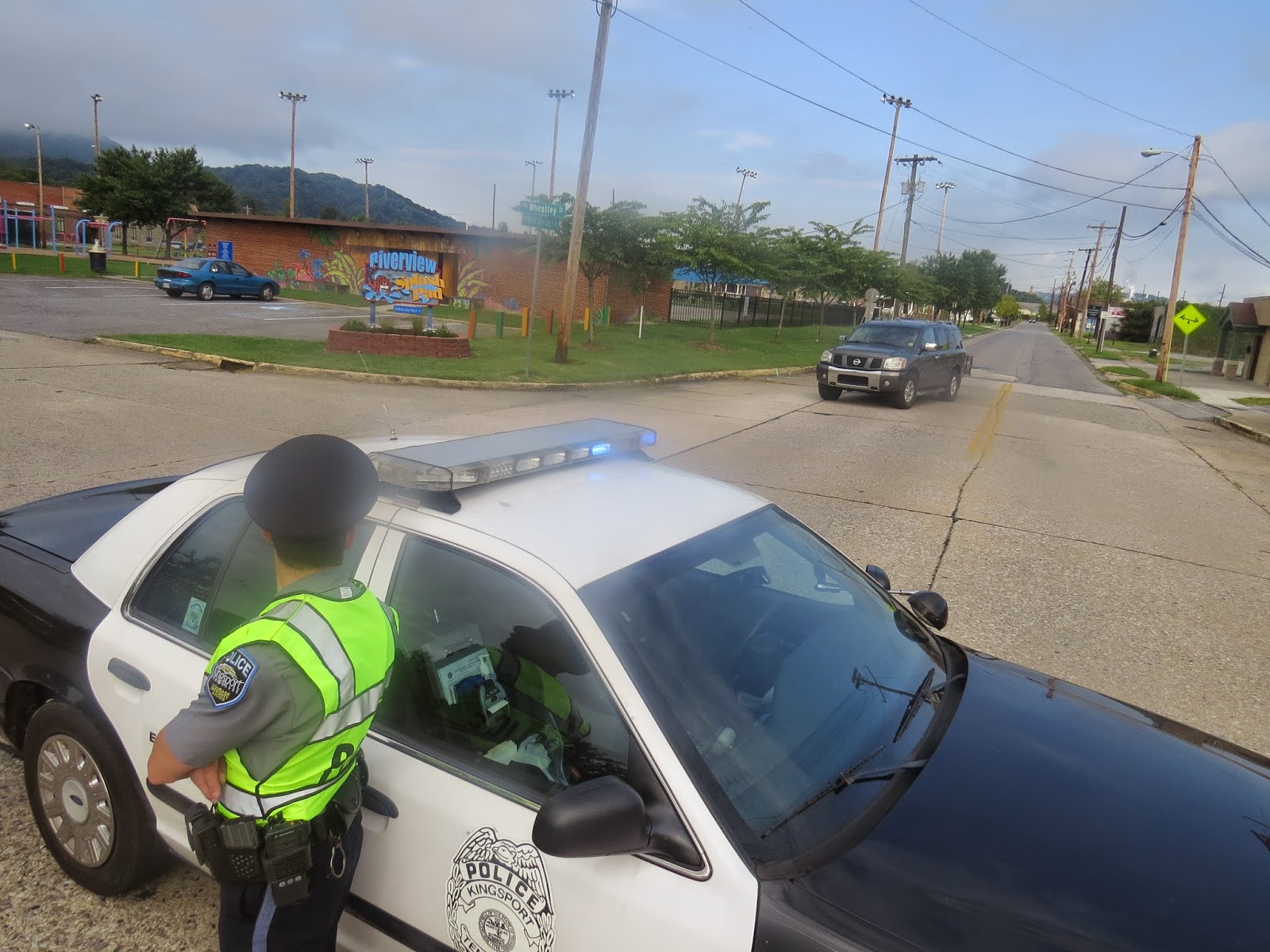 We found a Kingsport city police car with flashing lights blocking off MLK at Wheatley, forcing cars hoping to get around the blocked Wilcox Drive, to turn around and go back to the only way out of Riverview at that point.

They all had to come back through and exit the neighborhood at the same place they came into it....

....and that was right back to Wheatley and Industry, where others 'following the leader' were also coming into the neighborhood.  They also met traffic going TO the road race coming in on Wheatley to park in Eastman's parking lot.

"I know they're mad and frustrated," Pierce says. "You watch them come in, and then they're mad and flying back out. This is Saturday, the kids are out of school. What if they were out here playing in the street? One of them might get hurt. What if there was an emergency here in Riverview? What if somebody needed the life-saving crew? Industry's the only way out and it's crowded with cars." 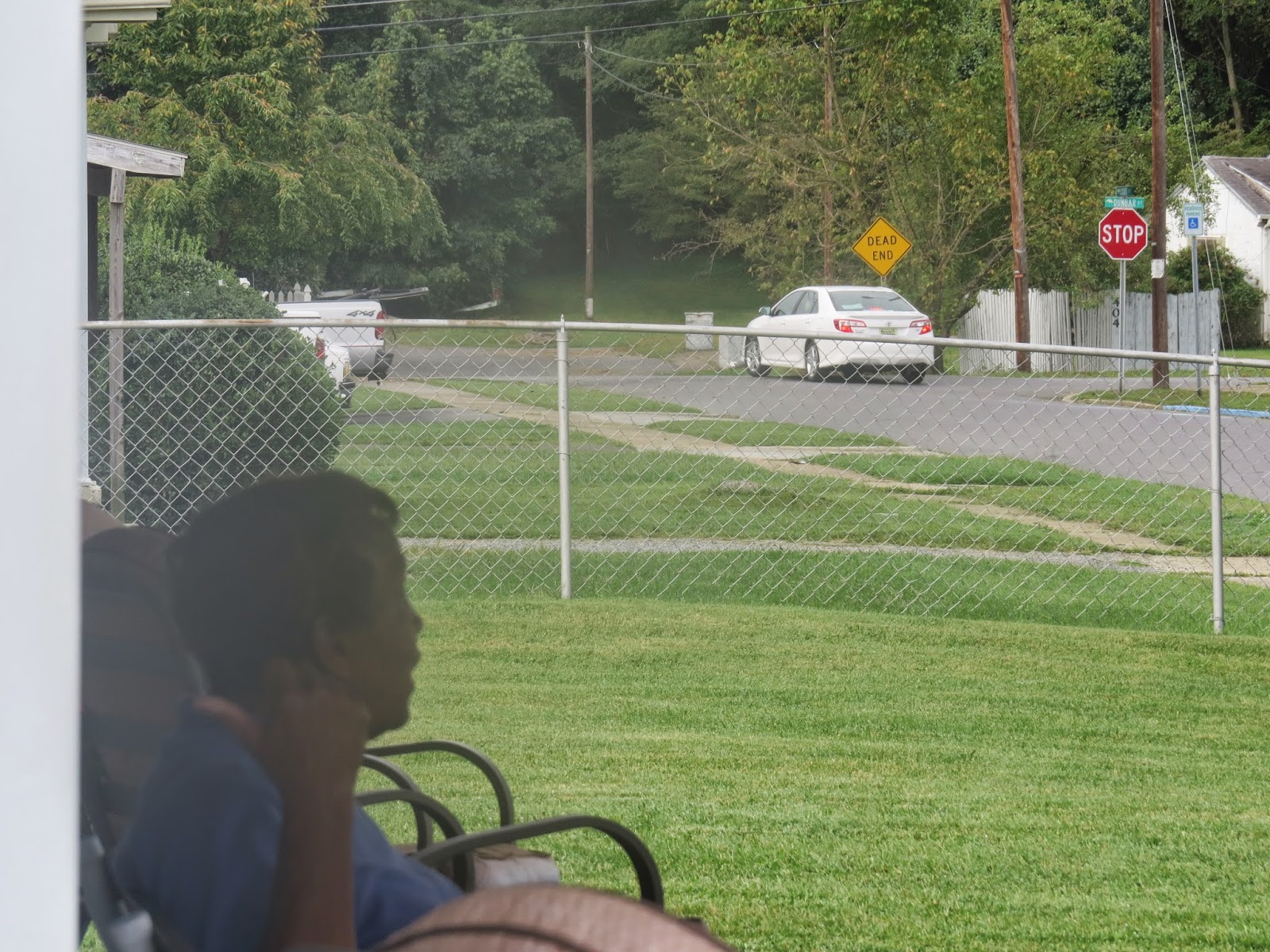 That sentiment was echoed by Jeannie Hodges, who sat on her porch and counted the number of strange cars in the neighborhood.

"So far, I've counted about 300 cars, running up and down Louis Street, and also going on down Dunbar," she said. "Pretty soon, here they come right back out, when they can't get out on MLK."

"I'd been sorta laughing at 'em, but then you feel sorry for 'em," Hodges said. "I know how I would feel if I was stuck driving around in a strange place. They don't want to be here, but they're stuck and the only way out is the way you came in, that's now bogged down in traffic."

"They don't know what we know," she says. "Riverview only has two ways in and out, and one of those is blocked." 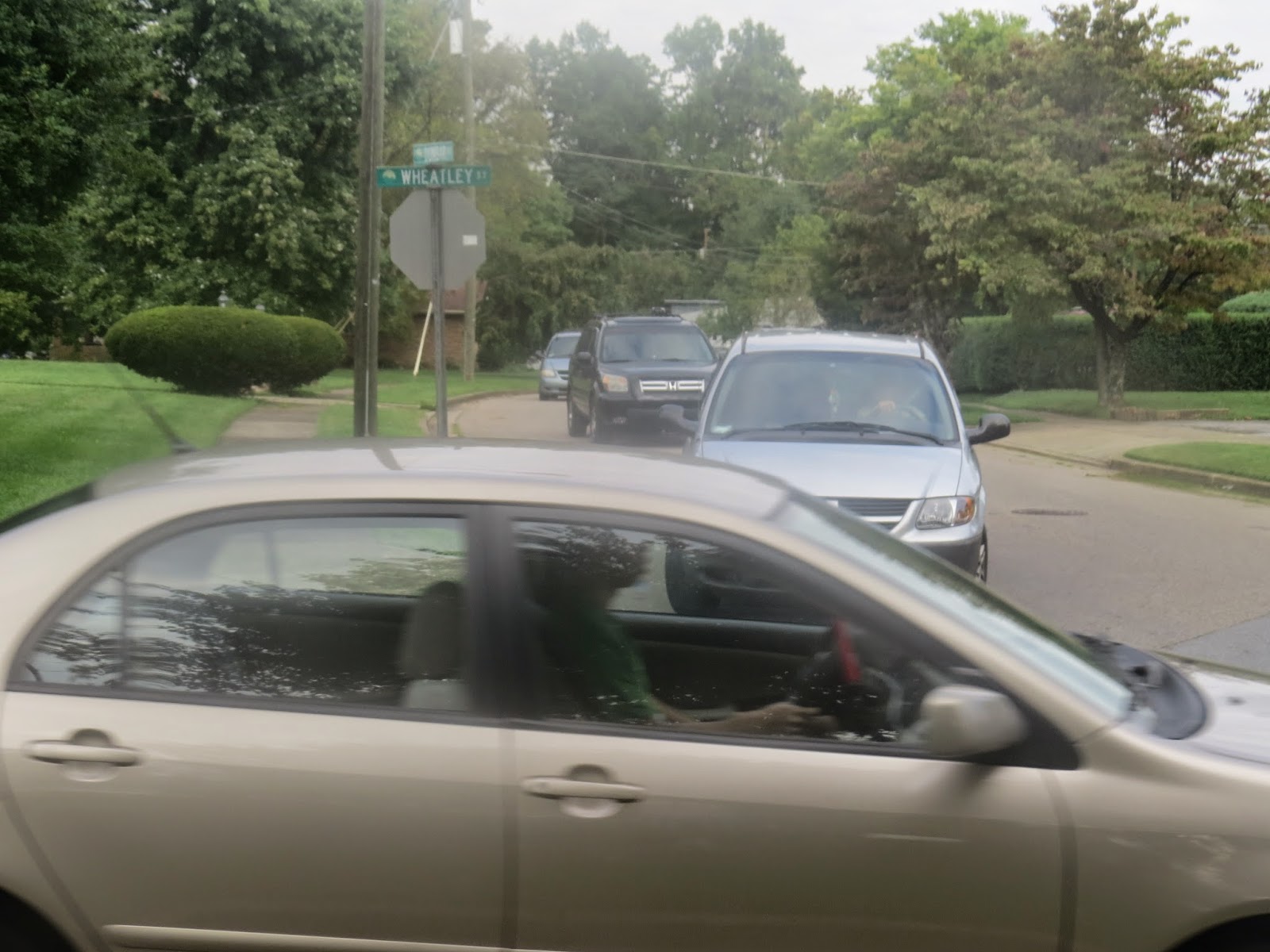 "The first we heard about the traffic problem was you telling us about it, Calvin," says Kingsport Traffic Engineering manager Tim Elsea. "Some people were probably thinking well, 'just follow the leader' coming north on Wilcox and coming down Industry Drive. If everybody was turning onto Wheatley, they probably thought that was the detour route. Instead, they got caught in the circle of traffic."

Would more 'detour' signs have helped? Everybody the Douglass website reporter talked to, responded with a resounding 'yes.' "Maybe even a 'no through traffic' sign would help," says Hodges. Abernathy says the only signs he saw, was one 'detour' sign on Wilcox pointing which way to go. "There was no sign at Industry and Wheatley at all," he noted.

"Signage would be an option to curb the confusion in the future," says Elsea, "as long as people read and follow them. Sometimes people don't pay attention to any signs that are out there. It might be best to put more detour signs for the Wilcox through-traffic out there, and 'event parking' signs for the folks who wanted to park in the Eastman lot. You don't want to close Dunbar, Louis and Carver with 'no through-traffic' signs, because folks who actually need to get into the neighborhood, might misunderstand what the signs really mean."

Elsea promised to look into the situation.

"It is definitely something that we'll sit down and look at," he says. "We'll look at this race and other events to make sure that the folks in Riverview don't get boxed in, because it can be an inconvenience." 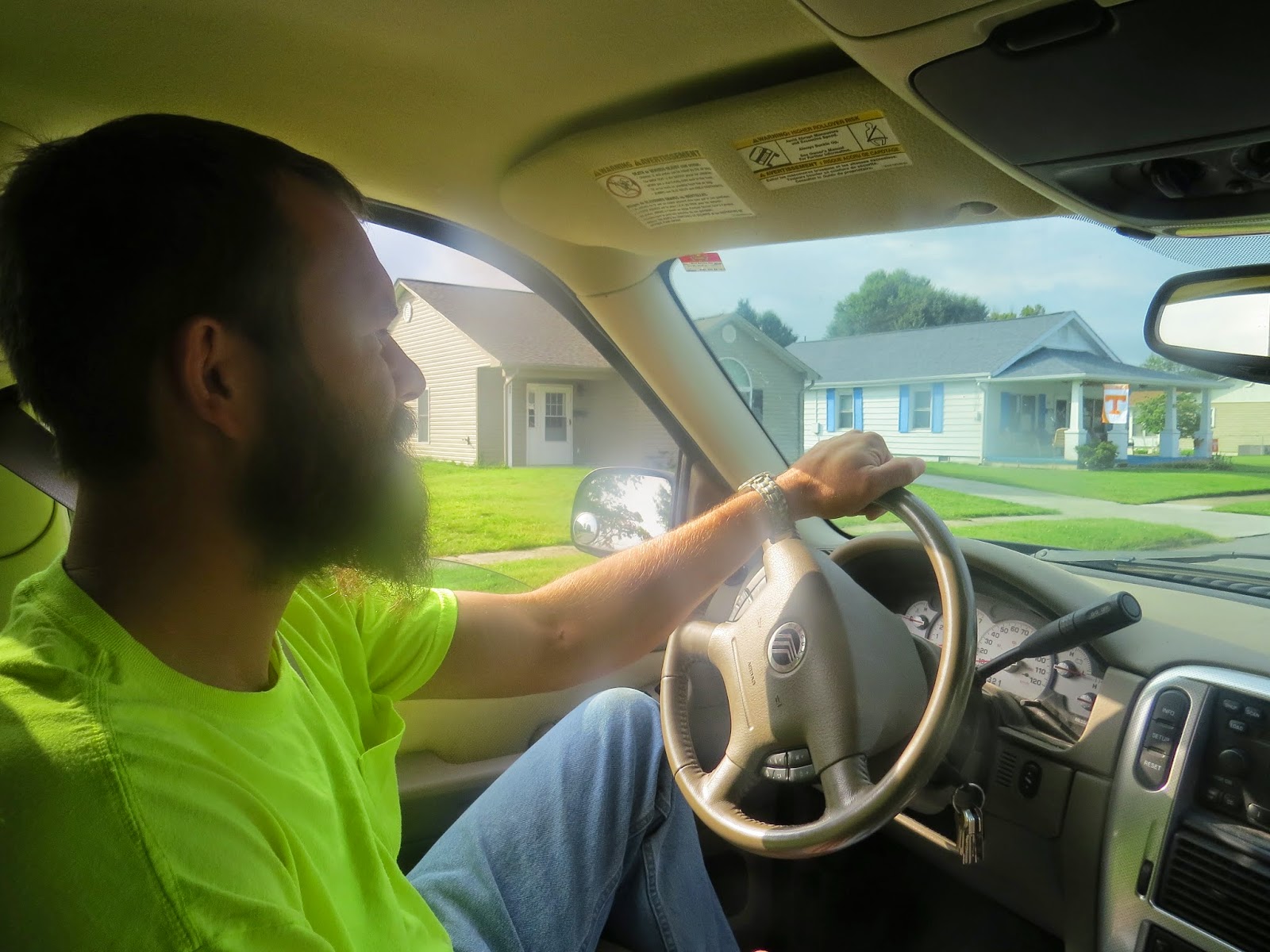 By the time Levi Abernathy came through, more than 400 vehicles, both private and business, had been counted coming into, and going right back out of, Riverview. As he was headed back the way he came, he paused to ponder.

"400 cars? Through this neighborhood? You gotta be kidding me," he said. "This is preventable with three or four more signs. Keep the one 'detour' sign at Wilcox/Industry, that leads right down to another one at Industry/Wheatley, and still more signs further down Industry. That way, folks like me wanted to get around everything can go on down Industry to Netherland Inn and come in the back way." 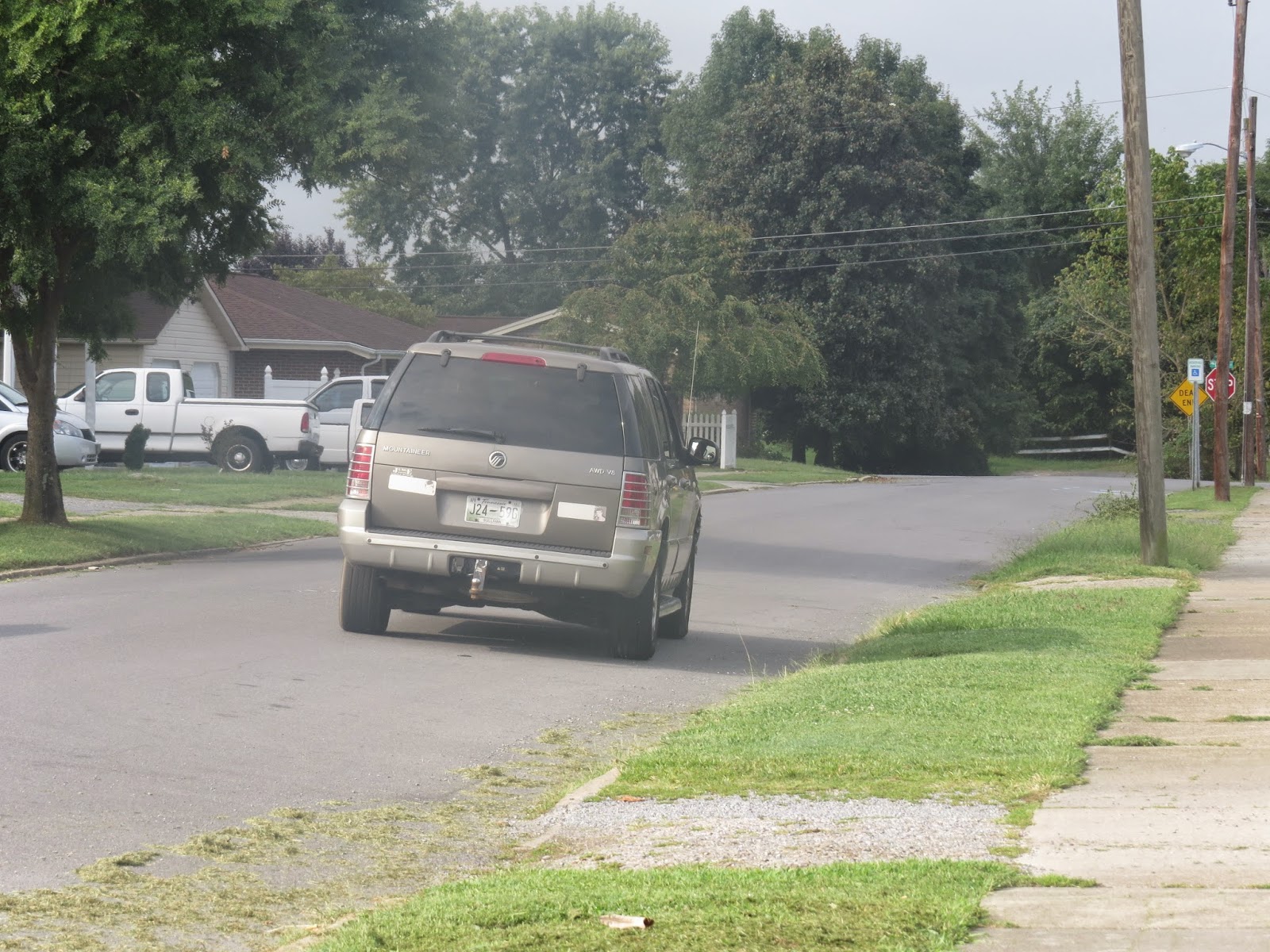 "Don't get me wrong," he says. "I've been to Riverview before. My wife comes over quite a bit to the Splash Pad, but I never get past there. This is a beautiful area than I've heard about in the past."

"Nobody ever talks to us whenever they plan these things," lamented Jack Pierce.

"I don't know of a funeral that would have this many cars up and down the street like this," noted Jeannie Hodges.
Posted by douglassriverview at 10:09 AM