THE FIRST RESIDENT OF RIVERVIEW: Welcome to the Chemical Capital of Kingsport 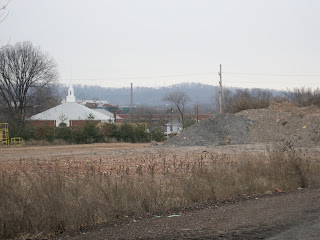 PICTURE BELOW, RIGHT: Photo looking in the same direction from March 2007 eastward from General Shale dumpsite behind Dunbar Street towards Riverview. The new Central Baptist Church rises in the background left.


In the late 1930's, industry was booming in Kingsport, Tennessee, the "Model City." The Tennessee Eastman Company was on its way to becoming the largest industry in the state, and within two miles nearby, General Shale, Penn Dixie Cement, Mead, the Kingsport Press, the Kingsport Foundry, The Blue Ridge Glass plant, Borden Mills, and Holston Defense all employed thousands of workers, both black and white.

Without an Environmental Protection Agency to govern how and where solid waste was disposed, most industries used nearby land that the Federal Dyestuff and Chemical Company had been located on to get rid of spent materials and chemicals. On 200 convenient acres between Eastman to the east, the Holston River to the south, General Shale to the west, and the Clinchfield Railroad to the north, every kind of toxic chemical waste imaginable was dumped, most of it vanishing into the ground, out of sight. Folks living across the railroad tracks from the dumpsite reported chemicals bubbling to the surface there during heavy rains.

During the 20's and 30's, Kingsport was not unlike many large American cities, with whites living anywhere in the city they chose, while its African-Americans tended to live between the Sullivan Street and Walnut (now Sevier) Avenue areas. Coincidentally, that was the exact same location where, only 20 years earlier, workers from the now-defunct Federal Dyestuff and Chemical Company used to live and would cross the railroad tracks daily to deal with and dispose of chemicals from the plant. Many blacks moved into what became known as "The Oak Street District," converting the old F. D. & C boarding houses into liveable homes along Sullivan, Dale, Oak, and Maple Streets. A few African-American citizens also settled along the base of Cement Hill, across the railroad tracks from downtown Kingsport. As the city prospered, jobs grew plentiful, more blacks joined their relatives, and soon the area was saturated. Kingsport's African-American citizens appealed to the city for land to expand.

As was common in those days, black citizens were not allowed to live amongst white citizens, and Kingsport was no different than its big-city counterparts. First (and it turns out, the only choice) for a black resettlement was the old site of the Federal Dyestuff and Chemical Company, now a dumpsite. Although it was convenient to work and downtown, many African-Americans balked at the location, knowing fully well the contents of the dumpsite, and knowing that, during heavy rains, dumped chemicals in the ground often rose to the surface.

Because of segregation, the Kingsport City Fathers would not approve many places for its black citizens to locate. It is said that the area behind the Borden Mills plant was offered, and that might have been a good place to be. Although there was a white community already established on the east side of Wilcox Drive, the Borden Mills area on the other side of that, was turned down because many African-Americans did not want to be too far away from downtown, their friends and relatives in the Oak Street District, or Douglass School on East Walnut (now East Sevier) where their children attended. On the other hand, the old Federal Dyestuff and Chemical Company dumpsite was convenient to where they already were. It was across the Clinchfield Railroad from the Sullivan-Dale-Maple-Oak-Walnut Street area, and it was near downtown, the school, and the industries where African-Americans worked. The city leased the old Federal Dyestuff and Chemical Company site from owner Tennessee Eastman (reportedly for one dollar), put down dirt, rock, fill dirt, and sediment. The city sold the land reportedly for 100 dollars a lot, and African-Americans were drawn to that area for what amounted to bargain property. The Riverview Apartments were built in 1940, and eventually the Kingsport Board of Education responded to the still-growing black population by building a new Douglass School building in the community. That, itself was a huge draw to the area.

Some black people who came to Kingsport for job opportunities, had heard about the chemical history of the land Riverview was built on, but the chance for good jobs was just too good to pass up.

"When I first heard about Douglass School," says Thelma Webb, "I had seen an advertisement in a teacher's publication. When I got here in 1957, I thought 'what a marvelous place Riverview is.. the people are so friendly, happy and close." Mrs. Webb was hired as a Douglass third-grade teacher. "Even though I had heard about the dumpsite the neighborhood was built on, my children made friends easily, and I enjoyed the fellowship among neighbors."

After Douglass closed in 1966, Mrs. Webb was one of a handful of Douglass teachers, who chose not to continue her teaching career in the Kingsport City School system. She moved to Pennsylvania to be near her sister and spent the next 25 years there.

Now at home in her native South Carolina, Mrs. Webb says she always wondered about the land the Riverview Neighborhood was built on. "It seemed every year, I would hear from friends in Kingsport who would tell me 'so-and-so died from cancer, this person is sick, that person is ill. What made it so unusual, was that these were YOUNG people getting sick and dying, not the older folks. I always wondered if they were getting sick from the chemicals that were dumped into the ground long before anybody ever got there."

To their credit, all of the industries who used the old Riverview dumpsite eventually "cleaned up their act" in terms of air pollution, and the E.P.A. enacted strict guidelines on how to dispose of hazardous solid waste that comes in their production processes. At least one of them, General Shale continued to dump scrap materials and spent chemicals on land it owned behind Dunbar Street, but it's now in dredge ponds and under special dumpsite dirt liners, under the auspices of federal waste regulators.

Today, that comes as little consolation to the folks who balked at having to move to Riverview when the city offered them nothing else, and years later, many of those residents wonder if they were exposed to toxic chemicals, that, once in the blood stream, may have been passed on to future generations.

"I definitely think the ground that Riverview was built on, needs to be tested," says Mrs. Webb. "Children may still be getting sick that haven't been sick before, and the cause could be something inherited from their parents, absorbed from the air and for years, right underneath their feet."

"Looking back years from now," she mused.. "I'd like to know if I was right."

FRIDAY: WHY ARE ALL THESE PEOPLE SICK?
PEOPLE GET SICK ALL THE TIME, BUT DID CHEMICALS IN
THE GROUND, QUICKEN THAT PROCESS FOR PEOPLE IN
RIVERVIEW? WHAT DO THE NUMBERS SAY?
IF THE DANGER IS GONE, MIGHT IT STILL LINGER FOR THEIR
DESCENDANTS?
Posted by douglassriverview at 12:25 AM