THE FIRST RESIDENT OF RIVERVIEW: Lessons Of A Legacy 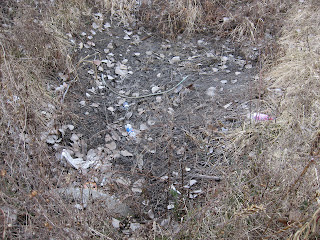 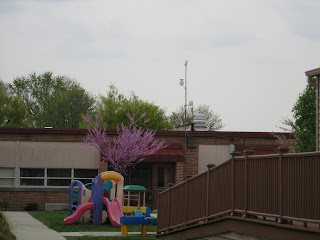 TOP PHOTO: A heavy rain in March 2007 in Riverview produced this area of percolated solid waste between The Hut and the railroad track off Lincoln Street. It was not in a ditch, but in a low area. Its contents are unknown.

BOTTOM PHOTO: The nearest air pollution station to Riverview, monitored by the Tennessee Department of Environment and Conservation. It's located at Jefferson Elementary School, and is the pole located on the roof in this picture. The station uses the instruments mounted on the pole to measure the amount of particulate in the air from nearby industries.


"Why are all these people sick?"
That's a question that Samuel Floyd Perry is asking himself every day, ever since he came back home to Kingsport to attend a wedding two years ago. "I was trying to find my old church, Bethel, and a very nice lady who was also a double leg amputee at the knees directed me around the (Mapleoak) Apartments, and later I ran into her neighbor, a former Douglass classmate of mine, who'd also lost a leg to diabetes. She later told me that 1 in 5 black persons, including children in Kingsport had diabetes. The horror of that similarity tormented me for weeks afterward," he said.

"Growing up, we always knew Eastman dumped stuff into the Holston
River," Mr. Perry says, "and I can remember, as a teenager I could go out some nights [too many nights] in Riverview, after Eastman had (what seemed like) poison in the night air! It would cause my eyes to tear and burn, and cause me to gag for air to breathe!! I knew as a teenager, THAT THIS WAS NOTHING GOOD FOR MY HEALTH !"

Mr. Perry is not alone. Others are questioning exactly how many
pollutants they've been breathing and ingesting over the years.

Riverview, because it was nestled within an industrial community (Eastman on the east, the river on the south, General Shale and Penn-Dixie Cement on the east, and the railroad on the north side), has had to tolerate much because of where it's located. Even though most residents of Riverview valued the wonderful industrial neighbors and the jobs they provide, some are concerned about the health of their neighborhood.

So what are the facts?

The following information comes from a brochure called "Discovering Our Community--Phase One," prepared by the group Kingsport Citizens For A Cleaner Environment. Its findings were published in 2005.
A fact sheet from the National Center for Chronic Disease Prevention and Health Promotion from April, 2004, says death rates per 100,000 people are "typically higher in Sullivan County, compared to the State of Tennessee's average." Specific percentages higher than the state average:

Of course, many illnesses (around the country, and also in Riverview) can be attributed to lifestyle, tobacco use, alcohol use, poor diet, family longetivities, and a general lack of physical activity. But history has shown that some people have family histories and body compositions that allow for diseases to attack easier, once they they're introduced and get a foothold in
the body.

"At the 2005 Douglass Reunion's memorial service," continued Mr. Perry, "20 of our brothers and sisters were memorialized! 20 family members had passed on since the reunion in '03, many of they our age or younger."

First, let's look at air pollution in our particular area, again, quoting from the "Discovering Our Community--Phase One" report.
Looking closely at the area within zip code 37660, the
Environmental Defense Fund's SCORECARD.ORG Environmental Justice website notes that "releases of toxic chemicals is 1.16 times higher (in that zip code) around communities of color, than for whites.
The website also notes that the cancer risks for hazardous air pollutants is 1.70 times higher for people of color than for whites in zip code 37660. There are also 4.17 times as many facilities emitting criteria air pollutants in areas of color (10)than in white communities (2.4) within the same zip code.
According to the same report, few neighborhoods in Kingsport have been located in air pollution "non-attainment areas" for particulate matter in the air like Riverview was when the state started mapping areas like that back in 1979. As a matter of fact, all of Downtown, along with Riverview, was located in a "non-ttainment area." Once Kingsport was labeled in this way, strict cleanup measures became a requirement, and local industry was ordered to find a way to stop the escape of "fugitive dust" from
cement-making, brick-making, wood pulp manufacturing, and other sources.
Many people would say the old Penn-Dixie Cement Company was the major culprit that led to the listing of downtown and Riverview as a "non-attainment area." During a public hearing on new air quality regulations proposed for the area, Penn-Dixie officials were quoted in the Kingsport Times-News as saying the stronger regulations were "hopelessly stringent, and would impose an unreasonable economic hardship on this company." Penn-Dixie Cement went bankrupt in 1983.
Meanwhile, the Mead Corporation said it agreed with the new
regulations, even though it would greatly increase construction and its operating costs. In 1994, Mead's Kingsport Plant was sold to Willamette Industries.
Tennessee Eastman Company said at the time, it was in compliance with existing air polution control regulations. Also in 1994, Eastman Kodak in Rochester, New York and Eastman Chemical in Kingsport became separate companies.
The Kingsport Foundry and its air pollution went bankrupt in 2002. The city is now trying to reclaim the site and haul away polluted ground.

Have you noticed, there's not that much of a smell in the air
anymore in Riverview?

In March of 1979, the Kingsport Board of Mayor and Aldermen asked for a study on how the city could take a more active role in pollution control. When the price tag came back, the board decided the cost was too much. Among the things the idea would have produced, would have been an air monitoring network of air samples, inspections on pollution sources, a city air pollution board for residents to file complaints with.

In terms of waste disposal sites, of course Riverview itself was built on top of a toxic waste dump, and the General Shale Company still operates a solid waste dump on "The Hill" between Dunbar Street and Industry Drive.
Today, the Tennessee Department of Environment and Conservation reports that within three miles of Riverview, are less than 100 waste disposal sites. They include "Solid Waste Management" sites, Hazardous Waste Sites, closed dumps and landfills, NON-REGISTERED solid waste sites (at least four of
those are within three miles of Riverview, municipal and industrial landfills, incinerators, waste water treatment plants, biosludge ponds (located near Meadowview), settling ponds, and some polluted sites that could eventually qualify as Superfund sites.
Even now, Eastman Chemical ALONE has at least 55 such sites within three miles of Riverview. Other sites in Kingsport (all within three miles of Riverview) include the E.J. Smith Petroleum site at Main and Sullivan Streets, where hydrocarbon contamination was just recently hauled away by daily truckloads. The Kit Bottom Site (which was the old AFG Industries dump site) is located on Horse Creek on the other side of the Sluice of the South Fork Holston River. Cement Hill across from downtown was contaminated with a high level of heavy metals, including arsenic, chromium, mercury and selenium, from when Penn-Dixie used it as a dumping site. Meanwhile, the Holston Army Ammunition Plant had at least two sites near Area A, across Wilcox Drive from Riverview.
Toxic wastes have continued to decrease overall for most of the industries within three miles of Riverview, according to the numbers. But the question remains.. BEFORE THERE WAS STRICT MONITORING OF WASTE DISPOSAL, WHAT AMOUNTS OF WASTES WERE GENERATED AND DUMPED, BEFORE THE E.P.A BEGAN RECORDING AND REGULATING SUCH DISPOSALS?

The answer.. may never be known.

The partners who compiled much of the material in the above report, feel that Riverview may, after all these years and regulations, STILL be at risk. The writers of "Discovering Our Community--Phase One" asked leaders and those who love Kingsport, to continue the journey towards improvement in Riverview and the surrounding community, "recognizing that the city's health is measured FIRST by the health of neighbors who live in the heart that makes the city tick." Since the report was presented two years ago, no city official has addressed the report or the request thoroughly.

This is just not satisfactory for former residents like Floyd Perry, who calls what Riverview's industrial neighbors did years ago, "criminal."
"It's just unthinkable what the Kingsport City Fathers did, putting us on a toxic waste dump," he says, "and we should never leave it alone."

"No matter how pretty they make Riverview," he says, "there will always be death just beneath the surface of the land, if the cries of my young brothers and sisters from the grave are to be believed."
Posted by douglassriverview at 12:19 AM