THE FIRST RESIDENT OF RIVERVIEW: Prelude To Pollution 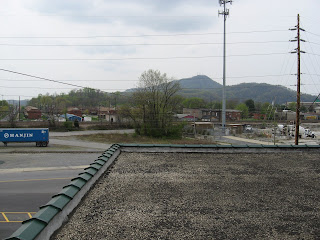 FIRST OF A THREE-PART SERIES
BY CALVIN SNEED

The first resident of Riverview was the Federal Dyestuff and Chemical Company. That company occupied all of the 100 acres of what is now Riverview, plus another 100 acres to the east of Riverview, across what is now Wilcox Drive and the Eastman ballfields, across Mad Branch, and over to AFG Industries.

Compare the two pictures above; they are the same view, 92 years apart. The one on top is a drawing dated 1916 of the southwestward view towards what is now Riverview, from the alley at the top of the hill at Dale Street. The long mountain in the back at the top of the picture is Bays Mountain. The railroad at the bottom is the Carolina, Clinchfield and Ohio Railroad--later the Clinchfield, now the CSX Railroad. The round circular building in the back of the plant is the old Roundhouse formerly at the corner of Wheatley and Dunbar Streets, and the low hill to the right of the Roundhouse, is "The Hill" behind the houses on Dunbar Street. Today, Wilcox Boulevard would split the plant down the middle of the drawing. The picture on the bottom is the same view, taken in March, 2007.

"Tennessee Eastman has been in Kingsport for many years but the Federal Dyestuff and Chemical Company Plant was here even before Eastman," wrote Belle Gardner Hammond, whose article is in the Archives Of The City Of Kingsport at the Kingsport Public Library.

"The men at the Kingsport Improvement Company wanted the Dye Plant in Kingsport. They donated two hundred acres of land to the company, and it was the beginning of the industrial era in Kingsport," she wrote. Construction was started on the plant in November 1915, and in early January 1916, the plant filled its first order for dye. It was a small order totaling just $600. The dye was shipped to Taubel Hosiery Mills in New Jersey. The mill’s next order was for twenty tons of dye. Pretty soon, the Dye Plant was a busy place. The company employed one thousand people and for a brief time, more men worked there than any other place in Kingsport.

The Federal Dyestuff and Chemical Corporation's 200 acres was bordered by the Holston River on the south side, and the recently completed Carolina, Clinchfield and Ohio Railroad on the north side. Within a year, 29 buildings had been built, making F. D. & C. the first manufacturing facility in Kingsport, predating the Tennessee Eastman Company by two years. 92 years later, the land now comprises the Riverview neighborhood, the current Eastman Chemical company headquarters, the Eastman ballfields, and Mad Branch over to the AFG Industries plant.

The Federal Dyestuff and Chemical Company produced caustic soda, chlorine sodium, hydrochloric acid, and nitric acid on the property. Raw materials brought in by the nearby railroad were coal, sulfur and salt. Combinations of these chemicals also produced nitrobenzene, dinitrobenzene, dinitrochiorobenzene, dinitrophenol, trinitrotoluene, picric acid, aniline toluidine, metaphenylenediamine and beta naphthol. Kingsport was undeveloped at the time, and the 35 chemists and 1,000 workers were brought into the area every day to work, and labor conditions were very favorable to this location.

Unfortunately, there is no documentation to indicate excess or spent chemicals were ever hauled away from the site, and it is assumed that because of the cost, most spent chemicals were simply dumped on site. In the early 20th century, there was no Environmental Protection Agency or conservation groups that mandated safe disposal or storage of spent chemicals. The clay and limestone makeup of the ground in upper East Tennessee allowed any chemicals lighter or heavier than water to not evaporate, but be quickly and thoroughly absorbed into the ground. Also, the nearness of the Holston River permitted any chemicals disposed on site, to easily seep into the caverns, crannies and caves that usually follow rivers in East Tennessee's average terrain. Since there is no written disposal documentation, nor are there living survivors of the plant who remember, nor any state or federal record of such disposal, ON SITE disposal could be assumed, because subsequent companies eventually disposed of THEIR chemicals on the old Federal Dyestuff and Chemical Company plant site.

As stated above, aniline is one chemical identified as being manufactured by the Federal Dyestuff and Chemical Company.. indeed, aniline continued to be produced by Tennessee Eastman's Holston Ordinance Works across Wilcox Drive from present-day Riverview. My research has now uncovered the fact that the building producing aniline was also one of the factories that blew up, during the Great Eastman Explosion of October 4, 1960.

Getting back to the rather properous Federal Dyestuff plant: There was a housing shortage or crunch as it was often referred to in Kingsport during World War I. It was said that the meadows of Kingsport were white with tents during that time. By 1918-1919, there were tents near the area where White City was later built. There were large boarding houses on Dale Street. The boarding houses were a convenient place for the out of town men who worked at the Dye Plant to stay.

There were explosions at the plant. When one explosion occurred, a man was killed instantly and two others who were badly injured, later died. A unit of the building was destroyed. The plant was near enough to the homes to cause people to be very upset by the explosions.

The advent of World War One, brought the need for factories that
could easily produce tear gas, and the Federal Dyestuff and Chemical's production was perfect for that. The company was reorganized into the Union Dye and Chemical Corporation, whose major government contract was for tear gas and explosives, with TNT production located in the Roundhouse building (located at what is now Dunbar and Wheatley Streets). The end of the war in 1918 left
the company with cancellation of orders for explosives and TNT, and
three years later, that company filed bankruptcy. A portion of the plant was acquired by the nearby Tennessee Eastman Chemical Corporation, and is still in operation on the other side of Wilcox Boulevard (that plant portion was operated for years for the Holston Ordinance Works by Eastman).

Eventually in the 1920's, all of the buildings of the Federal Dyestuff and the Union Dye and Chemical Corporations were torn down and as mentioned, since there was no Environmental Protection Agency to oversee the removal and disposal of the chemicals on-site, former workers report that what chemicals were not dumped into the Holston River, were simply dumped into the ground or left on-site. Unfortunately, there is no record that the ground was never cleaned up or reclaimed. Since there were no measurements of the water table or the ground layout under the plant, nobody really knows how much of the ground was poisoned, nor any of its lasting effects. Because of it's poisonous toxicity, the land becomes the dumping ground for nearby industries, including Tennessee Eastman Chemical, Penn-Dixie Cement, General Shale, the Kingsport Foundry, Borden Mills, Blue Ridge Glass, Mead Fibre, and the Kingsport Press.


COMING UP WEDNESDAY: 20 YEARS LATER, KINGSPORT NEEDS A PLACE TO LOCATE ITS RAPIDLY-GROWING AFRICAN-AMERICAN POPULATION, AND THE OLD FEDERAL DYESTUFF DUMPSITE IS CONVENIENT. WHO KNOWS WHAT'S IN THE GROUND UNDERNEATH THE ROCKS AND FILL DIRT THE CITY COVERED THE DUMPSITE WITH? WHAT ARE ITS EFFECTS ON THE HEALTH OF THE RESIDENTS WHO JUMPED AT THE CHEAP LAND OFFERED BY THE CITY TO LOCATE THERE?
Posted by douglassriverview at 10:02 PM