Firefighters Practicing Their Skills In Riverview

For the next month or so, be prepared to see firefighters on the streets of Riverview. 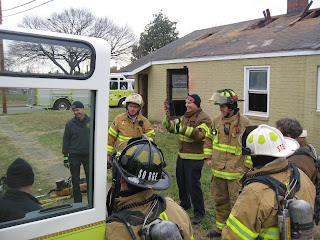 Don't be alarmed.. they won't be fighting fires raging at our neighbors' homes, unless it's the real thing.

But there will be a "hotbed" of activity in Riverview for the next couple of months, as firefighters from the Kingsport Fire Department practice their skills on abandoned homes and housing in the neighborhood, using what it takes to possibly rescue a homeowner, get them out of a smokefilled house, and get a blaze put out quickly.

MORE PHOTOS OF THE RIVERVIEW PRACTICE DRILL IN THE PHOTO GALLERY 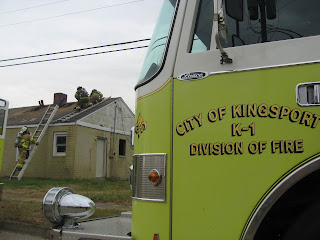 "We just don't get to practice our skills enough," says fire captain Bill Anders. "When a real fire happens, we have to go into reality mode, but being able to practice, gives us a wealth of good training skills the men learned to become better firefighters."

I found some of Kingsport's off-duty firefighters running a practice drill on the old McMiller house on Wheatley at James Street. The home has been vacant for years, and is now owned by the Kingsport Housing and Redevelopment Authority. The vacant home is scheduled to torn down and James Street eventually closed, to make room for the expansion and renovation of the Douglass School Building right across the street. 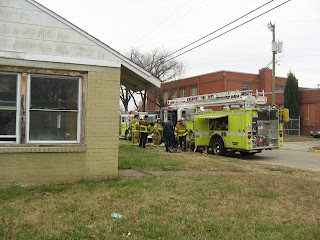 "The KHRA gave us permission to use this home as a practice facility," says Captain Anders, "and when we found out it was available, we jumped at the chance to get practicing as soon as possible."

"Today, we have about ten firefighters from Station One (Downtown Kingsport), Station Three (Memorial Boulevard), and Station Five (Lynn Garden), and we've got all our pumpers here," says Captain Anders. "Sometimes, it's not just the fire itself, it's the smoke that clouds your breathing, your eyesight and your judgment, the heat and the water we spray, that weakens the roof or the flooring, that could prove dangerous."

There was a time when the only holes we knew in a roof provided our parents access to the roof to adjust the TV antenna back in the days before cable (many of the kids in the neighborhood also used those "doorways to the stars" to get to hideaways where we could survey our territory, the neighborhood). 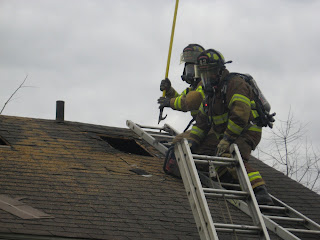 Today's firefighters have a different purpose for making new holes in the roof..
Huge holes drilled into the roof of the McMiller house providing firefighters in a life-or-death situation the chance to allow smoke and heat from a blaze to escape. "Ventilation is very important, because heat and smoke are two combinations that will take a life or destroy a home, even if we are able to get the fire put out," Captain Anders says. 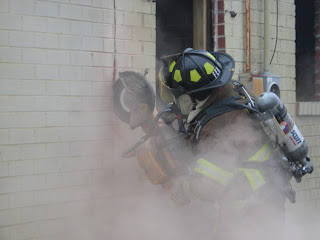 Firefighters also used a portable concrete cutter, with this scenario: there is a homeowner, bedridden.. trapped between life and death, with no way to escape. The men used the cutter to widen the doorway to allow that incapacitated person to be removed with little or no injury. The cutter blasting through the brick McMiller home, produced a lot of dust, which if it's combined with the smoke from the fire, will almost completely obscure the operator during the drill.

"If we have to get them out in a hurry, this helps us do that." 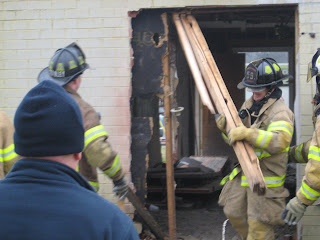 Another scenario placed an injured, downed firefighter just inside a door that's either locked or blocked off by burning debris. The men also used their techniques on getting through the door using sledge hammers and other tools. First, they dismantled the door frame with effort, splintering it seemingly into a million pieces, then ripping it out, forcing the door open and getting the firefighter out.

The old McMiller house provided firefighters the perfect facility to level the playing field when it comes to fighting fire. 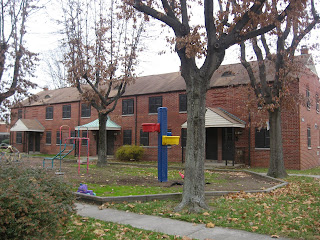 Members of the Kingsport Fire Department also have permission to practice on the Riverview Apartments once they are vacant at the end of the year, and before they are torn down several weeks later. "There," he says, "we'll put up the aerial trucks, the 24-footer and the 35-footer. We can put in a smoke machine in the apartment and smoke it up pretty good. That will give our men the chance to get better acquainted with their breathing apparatus. We can then go in and practice searching for dummy bodies hidden in the smoke, and maybe learn better ways of getting them out as soon as possible."

"It's just a tremendous training opportunity."

Riverview residents should not be alarmed if they see fire trucks in the neighborhood. "We know those concrete cutters and pumper trucks can be loud," says Captain Anders. "There's no way we can be quiet, but we can be courteous to our Riverview neighbors, by trying to schedule our activities in the middle of the day when not many people are home." (A SPECIAL NOTE HERE FROM CALVIN: These are only drills. Residents should not assume that homes or the apartments are on fire, just because there are fire trucks there, nor should them assume the demolition of the Riverview Apartments has started. That itself will not occur for several more weeks, if not months, and I am carefully monitoring that situation for you).

One thing Riverview neighbors probably won't see are actually pre-set fires during the firefighter drills. "We don't really try to burn down houses anymore just to practice," Captain Anders says. "It's a combination of the liability, the EPA, just a number of safety factors.. unfortunately, those practice skills are reserved for the real thing, and hopefully our firefighters have their wits about them, and are ready to work together to get through the real thing on site." 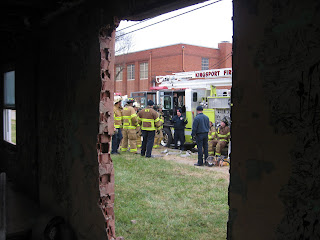 "Fire-fighting is coordination between the men involved, each one looking out for the other," says Captain Anders, "all of them always working for the same goal.. get the occupants out to safety, get the fire out with as little damage as possible, and live to go home to fight another day."
Posted by douglassriverview at 11:36 AM