WITH THE EXCEPTION OF 4 HOMES, ALL OF THE NEW RIVERVIEW HOUSING UNITS WILL
BE PUBLIC HOUSING RENTAL UNITS

ON TUESDAY, WE'LL SHOW YOU WHAT THE NEW HOMES WILL LOOK LIKE, AND PROFILES OF THE RIVERVIEW FAMILIES THEY ARE NAMED AFTER

Over the past few months, it has indeed been an exodus of people moving out of the
Historic Riverview Apartments. 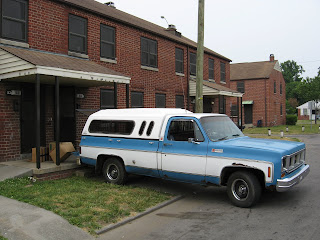 Since April, about 70 families have been relocated from the apartments, which are
scheduled to be torn down, to make way for new homes being built with the $11.9 Million dollar HOPE VI Revitilization Grant, awarded to Kingsport on December 6, 2006.

"One of our biggest challenges has been trying to keep children in their same school
districts," says Wendy Ramsey, HOPE VI Relocation & Supportive Housing Coordinator.
"Only just a handfull of families are left, and most have homes identified to move to. The time sort of crept up on people and all of a sudden, there was a deadline, but overall, the relocation has gone on smoothly.. everybody seems happy with their
move."

"We are still working on some environmental issues on the Riverview Apartment site
itself," says Doris Ladd, HOPE VI Director. "The state has requested additional
soil samples from the site. We have completed the asbestos assessment. Some of
the original flooring in the apartments was asbestos but during past remodels it was encapsulated by adding new flooring.

However, during the demolition the flooring will require careful removal and specific site disposal."

"There has really been nothing major that we have found."

"Right now, we are looking at mid-January for the crews to come in and start the
demolition process," says Mrs. Ladd. "We also are working with the Kingsport
Fire Department to let their crews come in and do practice drills with their
equipment, and also the Kingsport Police Department SWAT team to do rescue and
training in the apartments, which might move the demolition date back a bit." 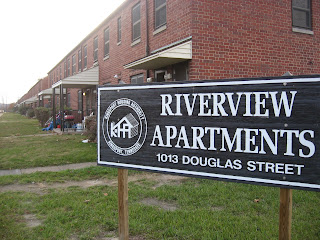 "Our demolition crew is the D. H. Griffin Company of Bristol, Virginia," she says.
"They're OK with moving the actual tear-down date to sometime in early February, if the crews haven't finished training yet."

Once the demolition starts, the Kingsport Housing and Redevelopment Authority will
apply for what's called "Low Income Housing Tax Credit Funding" to assist in the rebuild of the new single and duplex housing. Mrs. Ladd says that application is due in March. "We have meetings scheduled in January to complete the application ," she says. "The awarding of the tax credit funding probably won't happen until September of '08, and then we'll shop those tax credits around to banks and lending institutions in the marketplace to see who is interested. That process could take until February or March of '09."

Mrs. Ladd says, given those parameters, the bid process for construction could start
during the first quarter of '09 and once a financial institution picks up the tax credit funding, actual construction of the new Riverview housing could begin in April or May of '09.

"It's not a quick process," she says. "With all the excitement that's been
generated about the new housing, we really wish we could do it faster."

There is one myth that Mrs. Ladd wants to put to rest, concerning who will be moving
into the new Riverview housing. "The new homes built, will be public housing
rental units, not for sale," she says. There has been a rumor that the new homes
would be for Eastman employees working in the headquarters next door, and Ms.
Ladd says, "that is definitely not the case. Rent for the new housing, just like
for the former apartments will be based on low income and rental payments will continue to based on the same calculation as today."

"We are happy to dispell that rumor and look forward to our residents returning to Riverview in the future," Mrs. Ladd says.

The KHRA is now working with applicants on home ownership at Sherwood-Hiwassee, and
are still taking applications from HOPE VI, Section 8, and other public housing
candidates. If you have questions or you want to apply, please call Maria Catron,
HOPE VI CSS Coordinator, at 423-384-6306, or stop by the office at 1140 Lincoln Street in Kingsport.
Posted by douglassriverview at 12:55 PM