VIDEOS OF SOME OF THE SONGS COMING SOON!


20 years ago, "Share The Spirit of CBS" was the slogan of the CBS Television Network.

(LOGO AT RIGHT IS A COPYWRIGHTED TRADEMARK OF CBS-TV)

In that particular year, the spirit of another winner involving those same initials was born at the Central Baptist Church in Kingsport.

Almost 40 years ago, several members of Central's Senior Choir and members of the congregation, organized a youth choir, filled with the voices of their children and grandchildren.

The group chose the name "CBS," although everybody thought it stood for choir member Curtis Springs' initials, some laughingly saying, that's why he suggested it. But he really meant it to stand for the Central Baptist Singers.

The name stuck around. Today, CBS is an inspiration in the church singing community of Kingsport, and Christmas Night, 2007, the group held a concert at the church, to commemorate the achievements of the group, to welcome home some of its members, and to honor those founding church members who made sure the singing group never lost its focus. 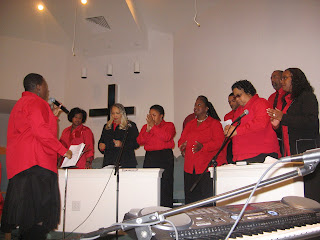 The Christmas Night event was heralded by the New Vision Youth, who lent their young voices to the Christmas classics "Silent Night," and "Oh Come Let Us Adore Him." The group is directed by Johnnie Mae Swaggerty.

Although CBS was the featured group, singing many audience favorites, other vocalists at the event included Sister Lauri Hale, whose rendition of "I Won't Complain" simply brought the crowd to its feet in praise. Sister Jessie Dennis, Sister Lynette Alley and Sister Bonita Johnson also rendered traditional Christmas songs. 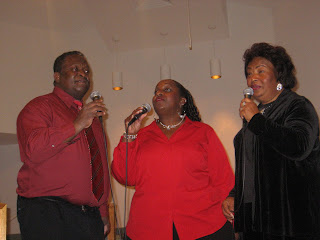 Noted singer and performer Wayne "Scat Cat" Springs, an original member of CBS, his sister Tona, also a CBS original member, and mama Louetta Springs Hall sang several selections, that reminded everyone how instrumental this family was in the evolution from traditional church favorites, to the newer-age, newer styles of Baptist Church music, although mama Louetta Hall, still keeps her roots in the down-home music of our ancestors.

Probably, the most moving selections came from the time-honored group "The Heavenly Echoes." This group of former Central Senior Choir Members Pinkie Horton, Louetta Hall, Eula Cartwright, and Bernice (Watterson" Horton accompanying on the piano, evoked memories of the Central Baptist Choir of old. If you closed your eyes, you could hear Sister Mary Rutledge, Sister Sarah Kincaid, Sister Dorethea McMiller, Sister Frances Graves and others all singing along with them in the choir box behind and beside the pulpit, while Sister Betsy Sneed played the piano, as Reverend Stokely tapped his feet to the music, urging sinners to repent and join the fellowship of the church.. 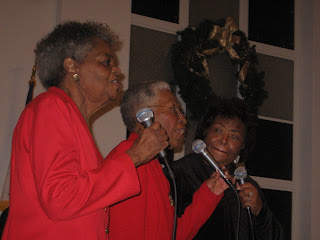 A highlight of the event Christmas night, was the dedication of plaques to the memory of those church members who were instrumental in helping get the CBS off the ground, and insuring their success. Families, individuals and descendants of Rev. William Stokely, Mrs. Virginia Lytle, Mrs. Gladys Bly, Mrs. Francis Graves, Mrs. Pinkie Horton, Lawrence "Tom Thumb" Tinsley, Curtis Springs, Joe Allen McMiller and Bravonne McClintock were presented the commemorations.

For years, the Riverview and South Central Kingsport community has been truly blessed to have "American Idols" right in our midst that we all grew up with, and to hear them continuing to lend their voices to song, uplifting the Name of Jesus, and the Word of God, leaves everybody who attended the CBS Concert with a warm feeling of fellowship.. the same fellowship we all grew up with.

WATCH FOR VIDEOS OF SOME OF THE CONCERT SONGS COMING SOON!
Posted by douglassriverview at 4:25 PM