Flag Flap: Rebel flag’s days at South may be numbered

One of Riverview's Closest neighbor schools flies the Rebel flag - Rooted in the Southern side of the Civil War, the flag has come to embody racism to some, but others see it as a symbol of Southern pride and history.

The days of the rebel flag on the campus of Sullivan South High School could be numbered, or at least limited. 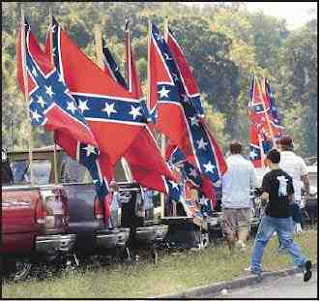 Because of a recent complaint about the rebel flag , Sullivan County Director of Schools Jack Barnes said a special committee at the school will examine the issue and may make recommendations in what Barnes called a proactive approach to the matter.

“We’ve had a complaint,” Barnes said.

“We’re investigating it,” Barnes said. “There has been a concern about the rebel flag being considered or thought of as a symbol of South High School.”

Barnes said some, including the person who made the complaint, find the flag offensive.

“There’s not any litigation or anything like that,” Hull said.

Rooted in the Southern side of the Civil War, for some the flag has come to embody racism, particularly against blacks, although others see it as a symbol of Southern pride and history.

Schools that play South in football, including Science Hill High School, have requested South fans not bring the rebel flags to away games, and South has not.

The school’s nickname is the Rebels, and the mascot is a colonel sometimes call Col. Reb, a caricature of a gray-uniformed colonel with a mustache and goatee in the Confederate Army. However, the school has never had the rebel flag as its official flag , although it is commonly waved during home football games and displayed during a parade of vehicles sometimes held outside the school on game days .

The rebel flags also sometimes can be seen flown from vehicles, especially pickup trucks, on public roads in the greater Kingsport and Colonial Heights areas, especially on football game Fridays.

“What happens outside and off school grounds is one thing,” Barnes said. “I’m not sure what will happen. It might be recommended the flag not be found on campus or on the football field, at least on school days.”

Barnes said a committee of South faculty, South administrators and a BOE member plan to address the concerns, and a Central Office representative may attend the meetings.

“Our whole point is to try to have an environment people don’t consider hostile or harassing,” Barnes said, adding that goes for South students, the community, and students and community members who visit the school for football and other events.

He said one option is to substitute the school’s official flag for the rebel flag at football games.

Barnes said any flag that some students see as offensive takes away from learning and education at South.

“We’re just trying to be proactive,” Barnes said. “I’m sure before the process ends, there will be students involved in it (the discussion) and members of the community.”

Barnes, whose contract as director ends June 20, will be followed by Jubal Yennie, an assistant superintendent from Williamson County in Middle Tennessee whose contract is to begin by June 20. But Barnes said he hopes whatever flag policy is chosen is adopted by the fall football season.

“I won’t be here, but it’s my desire it be done by the fall,” Barnes said.
Posted by douglassriverview at 11:20 AM