HOPE VI project on pace to wrap up by autumn


Erica Yoon —eyoon@timesnews.net
Wesley Dunn of Bond Masonry lays brick recently at one of the new houses in the Riverview community as part of the HOPE VI redevelopment project. Most of the homes are under roof and bricked, right. The targeted completion date for the project is Oct. 1. 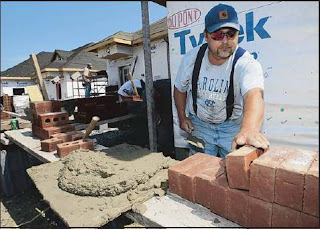 Most of the new homes in the Riverview community as part of the HOPE VI redevelopment project are under roof and bricked. The targeted completion date for the project is Oct. 1. Photo by Erica Yoon.


KINGSPORT — All of the HOPE VI houses along Sherwood Road and Hiwassee Drive have been sold, and more than 30 families have qualified for the rental units currently being built in the Riverview community. In the coming months, both phases of the redevelopment project should be completed, officials said this week.

More than three years ago, Kingsport received an $11.9 million HOPE VI revitalization grant from the U.S. Department of Housing and Urban Development. The idea was to use these funds toward a $30 million redevelopment of two distressed city neighborhoods.

The first phase replaced 29 houses along Sherwood and Hiwassee with 24 new, affordable homes, while the second phase called for 32 rental houses and duplexes built on the old Riverview Apartments site and six additional houses built in the Riverview community.

Last year, city officials and the development company on the project — Cornerstone Housing of Maryland — discovered a series of problems with the 24 houses along Sherwood and Hiwassee — poor masonry work, drainage issues, and problems with the concrete steps and driveways.

That repair work has been completed, said Doris Ladd, director of the HOPE VI project.

“All of the homes have been re-bricked, and the big parts are completed. We’re focusing on the yards right now,” Ladd said. “Given the time of year, the contractor has elected to do sod instead of seeding, which they believe will have a better chance. One yard has been in place about a month and looks really good.”

Ladd said the brick matched up as close as possible to the original color (given the original brick was not being produced any more) and the homeowners had good cooperation and understanding during the three-month repair process. Ladd said the HOPE VI staff worked hard to minimize the impact on the residents.

“We’re just pleased to be able to finish it and bring it to a conclusion,” Ladd said.

All of the homes along Sherwood and Hiwassee have been sold, and HOPE VI officials would like to add another six homes on the vacant lots in that neighborhood owned by the Kingsport Housing and Redevelopment Authority. Ladd said this would not happen until later this year or early next year, with the funds for the project coming from the sale proceeds of the original 24 houses. 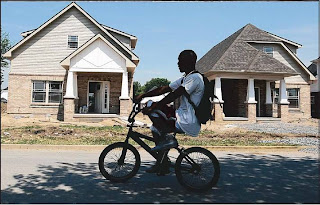 As for the Riverview phase of the HOPE VI project, Ladd said a couple of weeks ago work was about 60 percent complete. The last foundation was poured last week, and most of the homes are under roof and bricked.

“We have six that we will be getting certificates of occupancy next week and start leasing,” Ladd said, noting the targeted completion date is Oct. 1.

Sixteen single-family houses and eight duplexes are going up on the old Riverview site, along with six off-site houses — all of which will be public housing rental units. The houses are roughly 1,500 square feet and in the same model as those built along Sherwood and Hiwassee, with the houses being three bedroom/two bath and the duplexes being two bedroom/two bath.

Maria Catron, the HOPE VI Community Support Services coordinator, said the KHRA has 32 families eligible and qualified to move into the Riverview homes.

“When they saw the homes they said they would have never dreamed to get to this point.”

“These units are intended for families geared toward self-sufficiency, and the object is in five years these families will be out in the private market and we’ll be rotating a new group in,” Ladd said. 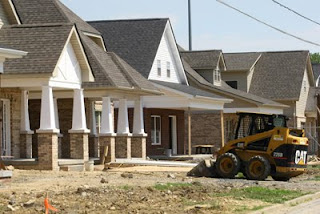 Residents in the Riverview homes pay 30 percent of their adjusted annual income as rent.

In addition to the two main phases of the HOPE VI project, the KHRA would also like to see development along Martin Luther King Jr. Drive, possibly commercial and some housing. The KHRA owns most of the property along that road.

The YouthBuild project has also built four houses in the Riverview community, with plans to build a couple more, Ladd said. The KHRA facilitates the sale of the houses, all of which have been sold.

YouthBuild USA is a community development program that works with troubled young men and women 18 to 24 years old helping them earn a GED, learn job skills, and work on building affordable housing.
Posted by douglassriverview at 1:48 AM