THIS AFRTICLE COURTESY THE KINGSPORT TIMES-NEWS

A dedication of the V.O. Dobbins Sr. Complex is slated for mid-August. 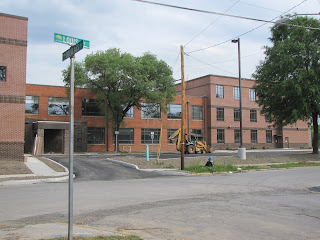 KINGSPORT — A multimillion dollar renovation and expansion project at the V.O. Dobbins Community Center is nearly complete, marking another major milestone in the transformation of the Riverview community.
And with the renovation comes a new name for the facility — the V.O. Dobbins Sr. Complex.
V.O. Dobbins is a city-owned community center located between Louis and Wheatley streets in Riverview. The building served as Kingsport’s “blacks only” school from 1951 to 1966 and was named Douglass High School.
Today, the complex is primarily home to the Upper East Tennessee Human Development Agency — a social service agency that offers programs for lowincome, elderly, homeless and disabled people in the region.
Kingsport began renovating the 46,000-square-foot facility over a year ago, adding 50,000 square feet of new space including another gymnasium and a new 28,000-square-foot, three story nonprofit wing. Cost of the project — $8.4 million. 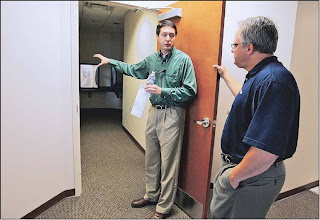 Chris McCartt, assistant to the city manager, said the nonprofit wing has been completed, and the remaining renovation work is scheduled to be complete by July 15 — 10 days after the original target date. UETHDA officials have already moved back into the building.
“A couple of change orders have stretched the time out, but the nonprofit wing is done. The rest of the building is not done, but it is on schedule to be completed,” McCartt said. “Tenants are moving in, our staff is moving back in, and the Head Start classes are operational.”
The Times-News recently took a tour of the facility, including the nonprofit wing, the new gym and the original building. 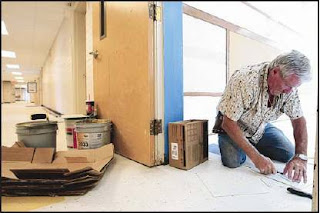 Overall, the interior of the building has received a fresh coat of paint, new drop ceilings, new windows, new carpet and tile, new and renovated showers and bathrooms, a new elevator, and a repaved parking lot with new curbs and gutters. The original school colors of blue and gold are featured throughout the old facili t y.
Crews plan to refinish the floor of the old gym and have installed new air conditioning and Plexiglas on the side of the seating. A space has been created at the gym for a game room and fitness area, which could include foosball, air hockey and a pool table.
A major addition at the property includes a new 11,000-square-foot gymnasium with a regulation-sized basketball court, which doubles as space for two volleyball courts. Two hundred seats are available, and McCartt said the court could be used for AAU events or both could serve as an emergency shelter. Four party/rental rooms are located between the two gyms.
The Douglass Alumni Association now has a space in the newly renovated building — a meeting room area located between the old building and the nonprofit wing. Three trophy cases have also been built in the complex, where the original trophies of Douglass High School will be relocated.
The complex will also include a police substation, computer lab, a courtyard with new playground equipment, and office space. Work to build a 9,000-square-foot community room — a requirement of the HOPE VI project in the Riverview community — is currently under way and should be complete by August or September, McCartt said. Cost of this phase is $1 million.
Future features of the complex could include a book/DVD vending machine (similar to the Red Box machines), a basketball court near the tennis courts, and public art.
The new nonprofit wing of the complex stands on the site of the old auditorium — a feature that could not be saved or renovated due to asbestos. The Board of Mayor and Aldermen approved contracts with several organizations earlier this month and plans to approve five more next month.
Nonprofit organizations lined up to go into the new wing include the Neighborhood Service Center of UETHDA and Mountain Region Speech and Hearing on the first floor, the United Way on the second floor, and on the third floor ALS, Susan G. Komen, the Palmer Center, Kingsport Tomorrow, the American Legion and Big Brothers/Big Sisters.
The only space not under contract is a small incubator suite on the first floor, McCartt said.
Rent for nonprofits is $5.10 a square foot, which includes custodian services, water, electricity and general maintenance of the facility. Kingsport is not paying for the phone or Internet service of the tenants.
Posted by douglassriverview at 1:28 PM