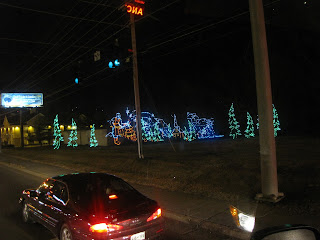 The "ou's and ah's" were plentiful on Saturday night, December 18, 2010, when the New Vision Youth Kids from Riverview and South Central Kingsport visited the Christmas Lights displays in Sevierville, Pigeon Forge and Gatlinburg, known as "Winterfest."  It's the 21st year for the event.
Although many of the kids had been to Sevier County and the Smokies before, never had they been dazzled by the lighting diisplays for the holidays that folks there put on for visitors.

Click here to see a slideshow of the New Vision Youth Kids bus tour of the Christmas Lights in the Smokies on December 18, 2010.
After dinner at the Golden Corral in Sevierville (the tour had to begin after the kids started painting their faces with the food LOL!!!), it was time to take in the holiday spectacle with lights, lights, lights. 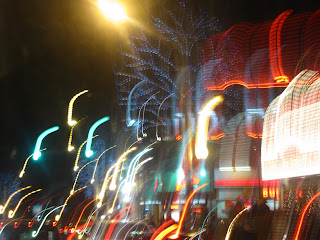 The lights played interest games with the camera, and that was equally as spectacular.  It lets the mind wander in a splash of color, lines and dimension.   Although some of them were visible, the trailing images created by the camera were equally as spectacular.  We left some of those images in the photo album in the PHOTO GALLERY.  Please enjoy the wild, wacky display of color.. the kids sure did.

Pigeon Forge is celebrating the season with the lighting display "The 12 Days of Christmas."  From one end of the Parkway to the other, the displays count down from "12 lords a-leaping," to the famed "partridge in a pear tree."

Then, on to Gatlinburg, where different lighting displays lit up the night and dazzled the kids and the crowds. 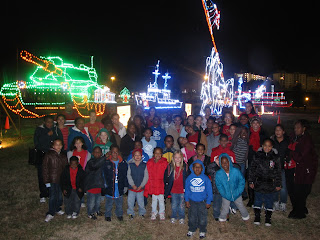 The highlight of the tour was the spectacular light display at Veterans Park in Pigeon Forge, decorated with thousands of lights. The park is hosting "From Sea to Shining Sea". The Statue of Liberty, the Liberty Bell, Army tanks, fighter jets and a reproduction of the Iwo Jima Monument were formed from Christmas lights.

It was an experience the kids won't soon forget.
Posted by douglassriverview at 5:24 PM