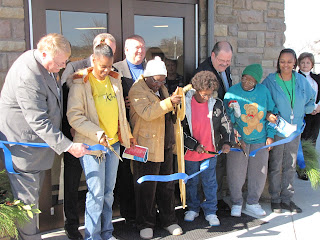 
KINGSPORT — One of Kingsport’s oldest communities has gained a new lease on life and a new neighborhood as a four-year, multi-million dollar redevelopment project comes to a close.

The city of Kingsport held a ribbon-cutting and dedication ceremony Monday morning for the Riverview Place neighborhood — a 32-home development on the old Riverview Apartments site — the final phase of the HOPE VI redevelopment project. 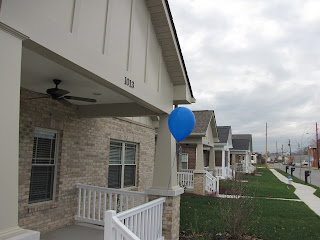 Four years ago Kingsport received an $11.9 million HOPE VI revitalization grant from the U.S. Department of Housing and Urban Development. The grant, along with additional monies from the city, went toward transforming the old run-down dwellings in Riverview and along Sherwood/Hiwassee with new, single-family houses for purchase and rent.

The first phase replaced 29 houses along Sherwood and Hiwassee with 24 new, affordable homes, while the second phase called for 32 rental houses and duplexes built on the old Riverview Apartments site and six additional houses built in the Riverview community.

“We thought there was no way a city the size of Kingsport would get this grant, and I’m not sure that we really thought we were going to get it,” said Mayor Dennis Phillips. “If you have not stood outside and looked at the houses, it is probably the most amazing thing I’ve seen in Kingsport in my life. I would be proud to live here.” 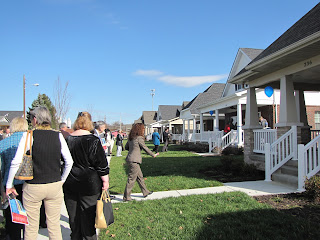 Armstrong Construction began work on the houses in Riverview in October 2009 and completed them earlier this month. The cost of the Riverview Place project, including demolition of the old Riverview Apartments site and new construction, came in around $8.4 million.

"I think we have something Armstrong and its employees can be very proud of. We have a project I’m proud of, and hopefully it will be something Kingsport will be proud of for a long time,” said John Leonard, CEO of Armstrong.

Sixteen single-family houses and eight duplexes have been built on the old Riverview site, along with six off-site houses — all of which will be public housing rental units. The houses are roughly 1,500 square feet and in the same model as those built along Sherwood and Hiwassee, with the houses being three bedroom/two bath and the duplexes being two bedroom/two bath. 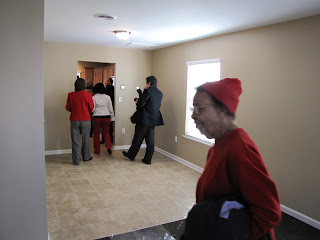 Attendees to the dedication were able to take a walk-through tour of three of the units on Monday.

Doris Ladd, director of the HOPE VI project, said all of the houses have been rented, with the last three families moving in on Monday and Tuesday.

According to Maria Catron, the HOPE VI Community Support Services coordinator, original Riverview Apartments residents are coming back to occupy 19 of the 38 new houses. Catron said of the 38 households, 10 are elderly and/or disabled while 28 will be working or in school. Approximately 75 eligible families are on the waiting list for future consideration of the houses. 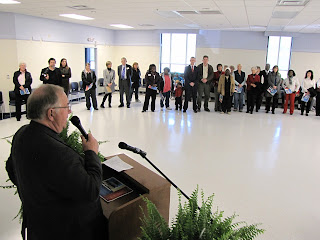 Under the guidelines of the HOPE VI grant, the KHRA had to create community space in the Riverview neighborhood, since the old space went down with the demolition of the Riverview Apartments complex. The $1 million community center includes a dining hall-style room, a computer and resident training center, a satellite Boys and Girls Club site and the Fresh Start office — relocated from across the street on Martin Luther King Jr. Drive. 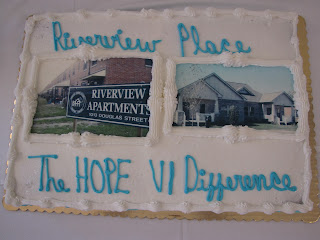 “We have disrupted this entire community with a minimal of complaint,” Phillips said. “While I think the end result is worth it, we owe a big thanks to everyone like Mary who had to relocate while these houses were being built.”
Posted by douglassriverview at 2:28 AM