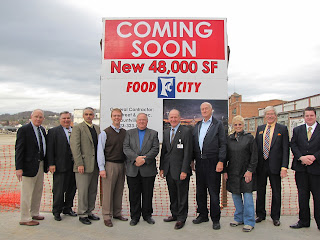 The new store is expected to open next spring and employ 175 people.


KINGSPORT — Construction of Food City’s third grocery store in Kingsport and its first store on the west side of town is officially under way.

(The groundbreaking was Monday afternoon, November 29th, 2010.  The store will be located directly on the site of the old Kingsport Press property, directly across the street from Domtar downtown, about 13 blocks from the Riverview Community).

Click here to see a slideshow of the Downtown Kingsport Food City groundbreaking.

Company officials gathered with city and community leaders Monday afternoon for a groundbreaking ceremony at the site of the new store, to be constructed on the old Quebecor property on Center Street in the downtown district.

Construction crews are already busy at the site, removing debris and building the store’s block walls. 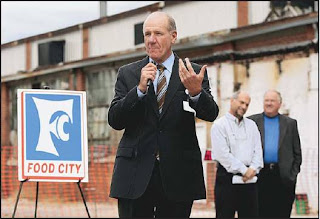 Steve Smith, president and chief executive officer of Abingdon-based K-VA-T Food Stores, the parent of Food City, said he hopes the new store will be under roof by the first of the year and be ready to open next spring.

“There’s no town that’s any more important to our company than Kingsport,” Smith told a crowd gathered for the groundbreaking. “This is our third significant investment in this community in the last three years.”

Kingsport is home to Food City’s largest store — a 55,000-square-foot facility on Eastman Road. The company built the store three years ago to replace a smaller one at the same location.

And just a few months ago, Food City expanded its Colonial Heights location.

“And now we’ll be able to make an $8-plusmillion-dollar investment here,” Smith said. “I can tell you that we work with lots of cities and counties and municipalities, and nowhere can I find one that works better with us than Kingsport.” 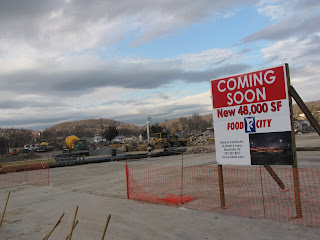 The downtown store will include 48,500 square feet featuring a drive-through pharmacy, sit-down cafe and Gas-n-Go. The store will create 175 new jobs — half of them full time, Smith said.

In addition, Food City is constructing another 24,000 square feet of retail and office space at the site, Smith said.

The new Food City will sit next door to the Kingsport Farmers Market — a perfect match for a company that purchases millions of dollars in produce from local farmers, Smith said.

“We bought over $6 million of locally grown produce this year and sold it through our supermarkets. That keeps a lot of family farmers working, and we’re awfully proud of that,” he said.

He said his company also wants to incorporate design features into the store to remember what the property once was. For years, the site was a book manufacturing plant, first as the Kingsport Press, then as Arcata Graphics, then as Quebecor World. Quebecor donated the 20-acre property to Kingsport in 2007 after it closed its facility there in 2006.

Since then, the city has worked to redevelop the property. The Sullivan Street portion is being converted into a medical office complex, while Food City purchased 8.5 acres on the Center Street and Press Street side for $1 million from the city to develop its new grocery store.

“I want to make a commitment that I made to them — we won’t forget that this is the Press property. And when we build this store, you’ll see a significance in the construction that will remind people for many years to come that this was indeed the Press property,” Smith said. “We think it obviously has a very important historical significance in this area.”
Posted by douglassriverview at 12:11 PM