FROM THE KINGSPORT TIMES-NEWS

A Kingsport school bus with students aboard was involved in a crash with a Hyundai Santa Fe at the intersection of Stone Drive and Netherland Inn Road at 4:10 p.m. Friday (November, 13, 2010). According to Kingsport Police reports, a bus from Washington Elementary School, driven by Sharon Goebel and heading westbound on Stone Drive, attempted to make a left turn during a yellow light onto Netherland Inn Road and was hit in the rear by the eastbound Hyundai operated by Jessie Charles. The Hyundai flipped over and landed on its top, and both Charles and a passenger were taken to Holston Valley Medical Center with non-life-threatening injuries. No one on the bus was injured. Several parents arrived on scene to pick up their children while the rest were transferred onto another bus. Both drivers were cited for failure to exercise due care. 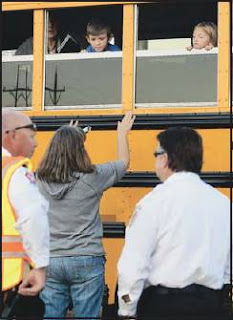 At right, Susan Haas talks to some of the children on board the bus.

We are checking on injuries to Ms. Charles and her sister Thelma, who was in the passenger side of the car.   As soon as we can update this story, we'll let you know.
Posted by douglassriverview at 9:26 PM