KINGSPORT — Cold weather and hot tempers on Friday night didn’t prevent second-ranked Dobyns-Bennett (11-0) from advancing to the second round of the TSSAA 6A football playoffs.

The Indians defeated a stubborn Jefferson County team 28-3 and will be facing Bearden, a 42-7 winner over Hardin Valley, in next week’s game. 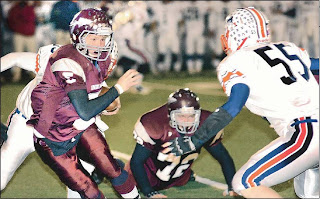 Quarterback Sean Seabolt, keeping the ball on options, gained 92 yards with 13 carries to lead the D-B charge. He scored a touchdown on a 15-yard run and passed 26 yards to Maurice Cannon for another.

“Seabolt makes plays,’’ Indians coach Graham Clark said. “Jefferson County moved the ball and ran some clock on us early in the game, then our defense stiffened.’’

The Patriots (6-5) took the battle to D-B early on. After missing a 47-yard field goal, their game went downhill. 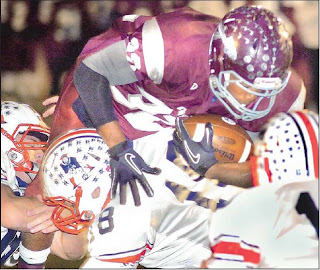 D-B fullback Chris Sensabaugh, who has rushed for more than 4,000 yards in 3½ seasons as a varsity starter, capped an 80-yard scoring drive by plunging the final yard for a 7-0 lead.

“We knew what we had to do,’’ Sensabaugh said.

Nineteen seconds later, the Indians were on the scoreboard again. Derrick Steele intercepted a pass and returned it 38 yards for a touchdown.

“We had a lot of fire in us starting the second half,’’ Steele said. “I stepped in front of the receiver, caught the ball and took it to the house.’’

The first half ended with an altercation. Both teams emptied their benches after Jefferson County’s Anthony Goins intercepted a pass and ran it back to midfield. It took coaches several minutes to restore order. There were no ejections.

“Some dude pushed our guys along the sideline,’’ Seabolt said. “We’re very close on this team and we’re not going to let anyone shove us around. We went into the locker room at halftime and got settled down.’’ 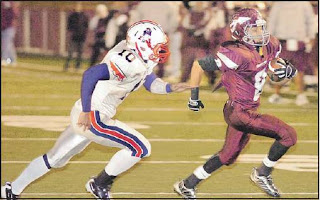 D-B dismantled the Patriots in the third quarter. Seabolt scored on his 15-yard run just moments after Devaun Swafford raced 73 yards with the second-half kickoff.

“It was a right-sideline return,’’ Swafford said. “I got through a wave of defenders and didn’t realize the player who tackled me was that close.’’

The Indians finished the scoring with the TD pass to Cannon, who sprang open on a go-route.

“Sean had underthrown one pass to me,’’ Cannon said. “This one was a beautiful throw. He put the ball out there and it just fell into my hands.’’

D-B simply wore down the Patriots.

“We just ran out of steam in the second half,’’ Jefferson County coach Justin Anderson said. “D-B has a great team. We knew that before we came up here. We didn’t execute a couple of times on fourth down and that killed us.’’

“I had fun playing in the first half,’’ Hayworth said. “It made me mad that I didn’t get to be out there in the second half.’’

Clark put in Hunter Holt to fill Hayworth’s guard position. “Hunter stepped in and did a nice job,’’ Clark said.

Jefferson County posed a threat with the type of speed D-B hadn’t seen this season.

“(The Patriots) had a good game plan running option plays against us,’’ Seabolt said. “We won and I can’t tell you how happy I am for my teammates.’’

Darrell Watson, D-B’s associate head coach, said the Patriots moved the ball effectively in the first quarter by attacking the inside.

“We got pressure on the edges after they spread out and managed to slow them down,’’ Watson said.

Jefferson County was held to only 83 yards total offense.

Swafford rushed 11 times for 56 yards.
Posted by douglassriverview at 12:11 AM