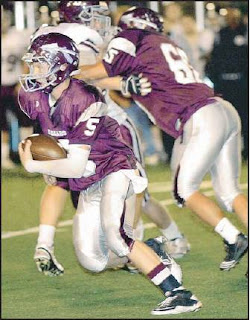 Ned Jilton II — njilton@timesnews.net
D-B QB Sean Seabolt (5) gets a block from one of his linemen and heads upfield.

KINGSPORT — On a night of spectacular performances, it was a busted play that proved to be the game-winner.

Bearden scatback Devrin Young took the ball outside instead of inside and raced 10 yards to paydirt, and the Bulldogs upset Dobyns-Bennett 41-35 in overtime Friday night in the second round of the TSSAA Class 6A playoffs at J. Fred Johnson Stadium.

The touchdown was one of five for Young on the night.

“The play wasn’t designed that way,’’ a jubilant Young said afterward. “But all the guys held their blocks and I was able to get to the outside and score.’’

The victory sends Bearden (9-3) to top-ranked Maryville next Friday in the state quarterfinals. The Rebels thumped Farragut 41-10 to advance. 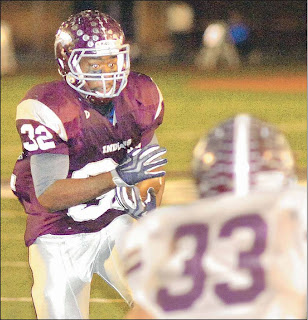 For the Indians (11-1), it was another frustrating early-round loss in the playoffs. D-B entered the contest as the state’s last undefeated 6A team and rated first in the TSSAA’s power rankings.

“Penalties and mistakes just killed us tonight,’’ said Tribe coach Graham Clark. “Maybe the kids just wanted it too much.

“Our offense depends on execution and a couple of crucial times we didn’t get the job done.’’

Both teams scored on their first two possessions of the game.

Bearden took the opening kick and embarked on a six-play, 61-yard scoring drive. Young covered the final 22 yards on a breathtaking run to the end zone.

That drive was helped by two 15-yard penalties against D-B. 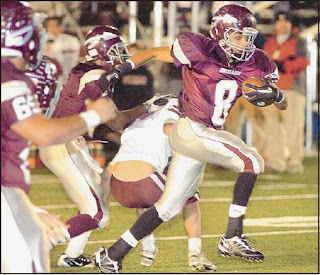 Ned Jilton II — njilton@timesnews.net
Devaun Swafford (8) slips through a hole in the line and runs for a Dobyns-Bennett touchdown against Bearden on Friday night.

The Indians answered with a 10-play, 62-yard possession and knotted the score at 7 when De- vaun Swafford raced around the left end for the TD.

Young scored again on a 1-yard run before D-B’s Chris Sensabaugh bullied his way into the end zone from a yard out to tie it at 14.

However, Bearden went to the locker room ahead 21-14 after a 28-yard scoring pass from Kyle Riemer to Stefon Stephens.

After the break, Sensabaugh capped a 10-play drive with a 3-yard TD to start the third quarter that pulled D-B even again.

Then things got interesting.

On the ensuing kickoff, Bearden’s Josh Haney fielded the ball and immediately pitched it back to Young.

In the blink of an eye, Young burst through the D-B defenders and raced 80 yards to put the Bulldogs back on top 28-21.

Quarterback Sean Seabolt got the Indians back on the board when he connected with Derrick Steele on a 21-yard pass in the right corner of the end zone. The extra point was wide, however, leaving D-B down 28-27 with 4:32 left in the third quarter.

With 3:32 left in the game, Seabolt gave the Indians their first lead of the night when he found Swafford with a 15-yard scoring strike, and a successful 2-point conversion put the Tribe up 35-28.

Seabolt brought the D-B faithful to their feet with a 43-yard pass to Swafford that put the ball on the Bearden 17-yard line with three seconds left. D-B immediately lined up for a field goal attempt, but the Bulldogs call three successive timeouts to ice the Tribe.

The ploy worked: The snap from center was high and Bearden defenders swarmed the holder.

The Indians got the ball first in overtime but were stymied by a procedure penalty. They went for it on fourth-and-5, forgoing a possible field goal.

“Our guys never stopped fighting,’’ Clark added. “That’s what they need to take away from this game, they fought their hearts out’’.

Sensabaugh finished with 172 yards rushing on 25 carries. The Indians had 526 yards of offense but were slowed by 12 penalties for 118 yards.

Young carried 25 times for 112 yards.
Posted by douglassriverview at 9:23 PM