A number of Fun Fest events will encourage everyone to be active, including the Xtreme Challenge. 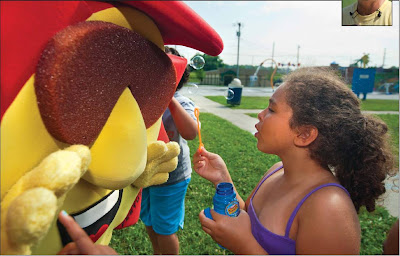 David Grace —dgrace@timesnews.net
Arianna Valentine blows bubbles at Festus before the start of Tuesday’s Fun Fest news conference, which was held on the Douglass Ballfield in Riverview.


KINGSPORT — Members of the 2011 Fun Fest committee encourage thrill seekers of all ages to “Get Out and Play” during Fun Fest this year. Fun Fest Chairman Monty McLaurin, Fun Fest Director Lucy Fleming and others encouraged not only kids, but the entire Kingsport community, to participate in all of the 2011 Fun Fest activities during a news conference Tuesday.

The news conference was held at the new V.O. Dobbins Community Center playground in hopes of encouraging everyone to stay active this summer.
“I’m here to tell you that none of us are too old to play,” said McLaurin.

During the conference, McLaurin emphasized the importance of physical activity and stated that there will be a number of events during Fun Fest that will encourage everyone to be active.

“This was a tremendously successful event,” said McLaurin. “We have been able to take care of hundreds and hundreds of children, and as a result of that we want to make that an official part of Fun Fest to be able to reach even more children.”

Kicking off the concert series on Friday night will be 17-yearold Jordyn Shellhart from Santa Rosa, Calif. Shellhart signed with Sony Records at the age of 14. The McClymonts, an Australian band with four No. 1 hit singles, will also take the stage Friday night. “American Idol” contestant, Kellie Pickler will be the final performance. Pickler co-wrote her first hit “Red High Heels,” which also became her first gold single.

Opening up the Saturday night concert will be singer and songwriter Kip Moore. Moore’s most well-known single is “Mary Was the Marrying Kind” off of his debut album. Wrapping up the Sunset Concert Series will be the man of many hats, Trace Adkins. Making his country music debut nearly 15 years ago, Adkins has proved over the years that he is one of the most identifiable artists of his generation.

Although there will be a variety of events for all ages, one of the main goals of Fun Fest is to unite families, friends and the community.
“Every year what we expect are smiles and people having a good time and great experience with family and friends,” said Fleming.

McLaurin expects the crowd at Fun Fest this year to be the largest ever.
“Over the past three decades we’ve watched Fun Fest grow and get bigger and bigger every year, and this year is no exception,” said McLaurin. “We have an exciting festival that’s lined up with lots of new events.”
Posted by douglassriverview at 12:27 PM