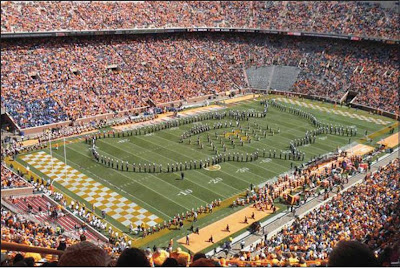 It was a stirring performance that either raised goose bumps on your arms, or sent tears down your face.

The Dobyns-Bennett band performs its "Salute to Heroes" during halftime at the Tennessee game Saturday at Neyland Stadium in Knoxville. The performance spotlighted the fight songs from each branch of the U.S. Armed Forces.

The tribute was, in a word... wonderful.

Click here to see the D.B. Marching Band "Salute to Heroes, during the half-time show at the UT-Buffalo game. This video from Jeff Fleming.
Posted by douglassriverview at 12:57 PM