‘If she would have gotten there a little later, we’d have had a dead principal.’ — Sheriff Wayne Anderson 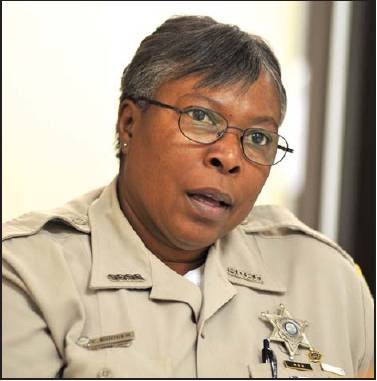 It’s been 14 months since a gunman entered Sullivan Central High School in Blountville, igniting a nearly 15-minute standoff with police before he was shot and killed.
But for the Sullivan County officer who stepped between the man and school Principal Melanie Riden, attempting to coax him to hand over his weapon as police swarmed the facility and students huddled in classrooms, time has not dulled the memories.

With that vividness still intact, Officer Carolyn save lives if the nightmare scenario unfolds in their community.
“Some people probably want to know why I didn’t shoot right off,” says Gudger, a 15-year veteran of the Sullivan County Sheriff’s Office and school resource officer. “All of (the presentations and interviews) afterward have been more nerve-racking than the actual event.”

From the Tennessee Sheriffs’ Association in Nashville to a national conference for school resource officers in Orlando, Fla. — and many stops in between — Gudger has been sharing her experiences and fielding questions. Anderson accompanies her to outline how the events unfolded and chronicle his department’s response.
“The thing we stress is train, train, train,” said Anderson. Gudger and Sheriff Wayne Anderson have been speaking to law enforcement agencies throughout the Southeast. The goal: Provide insights that can and plan with your schools. 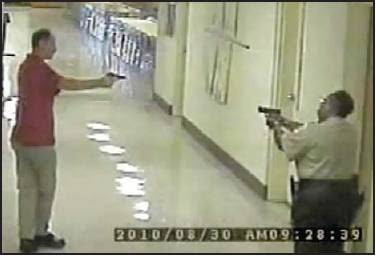 “What we try to do is teach them it will happen. It’s going to happen, in your community, and you have to prepare for it.”
Thomas Richard Cowan, 62, of Kingsport, was fatally shot once two other officers converged on his and Gudger’s position inside the school. Gudger doesn’t profess to have all the answers, or have written the gospel on handling such a situation. As Cowan demanded to speak with the FBI, U.S. marshals and eventually the sheriff, she simply replied it would be done after he handed over his weapon.
But she does concede that sharing her experience can’t hurt her brethren in the field.
“Seeing others’ reactions helps,” she said. “I watch that silly show “Cops.” I say, ‘I wouldn’t have handled it that way.’ Or ‘Here’s what I would have done.’ I think most (officers she speaks with) look at it that way.”

The events of that day have earned Gudger induction into the American Police Hall of Fame in Titusville, Fla. She was one of eight finalists for a national competition from “America’s Most Wanted” and served as grand marshal for the Food City 250 at Bristol Motor Speedway.
But Gudger says the biggest changes she’s experienced aren’t the media exposure, both locally and nationally, but how she now internalizes stressful situations she faces.
“One side of me (during the incident) was, ‘Why haven’t you shot?’ The other side was calm,” recalls Gudger. “I listen to the calm more than I used to.” 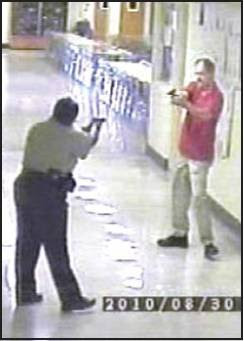 Gudger and Anderson say they still don’t have a concrete explanation for what motivated Cowan to enter the school with two loaded guns, pointing one at the principal’s head. There’s talk that students had been making fun of his brother, a custodian at the school, and the gunman was angry with the school administration.
But they know the staffing of a school resource officer saved lives. Gudger, one of four SROs within the county, had been dealing with an issue at a middle school and arrived at Sullivan Central minutes before Cowan entered.
“If she would have gotten there a little later, we’d have had a dead principal,” Anderson said.

Ahough the timing that day was serendipitous, police can’t bank on such strokes of luck. That’s why Anderson lobbied this spring for funding to place school resource officers in all county schools, not just the four high schools.
The proposal was not accepted.
“I was so disappointed, not only in the County Commission but the school board,” Anderson said. “At first everyone was really interested and thought it was really needed. Then there were some critics that questioned if (Cowan) really wanted to hurt someone.
“Well, he had two loaded guns and pulled one on an officer and a principal. So he definitely was there to do harm.”
Anderson said the start-up for eight additional SROs would have cost $500,000, then tallied approximately $350,000 in subsequent years. The SCSO applied for grants to fund the positions, but as with many agencies looking for federal funds in a recession, was denied.
Anderson said he’ll again seek the money from the Sullivan County Commission in next year’s budget.
“Everyone says it’s a tight budget time, but to me our children are a priority,” Anderson said. “Maybe there’s a mind-set it won’t happen again, and hopefully it won’t, but it certainly could.”
Posted by douglassriverview at 11:20 AM