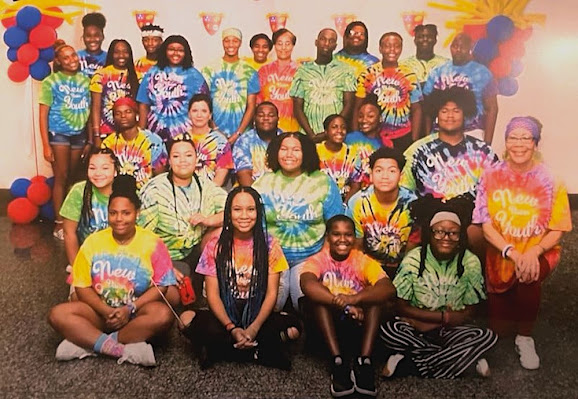 The New Vision Youth group of Kingsport has always had a lot of spirit.  Whether it be at local community events and programs, birthday parties for seniors, neighborhood parades or school activities, you'll always spot them.  The New Vision youngsters are always the most excited participants there.

Now the entire state of Tennessee knows about their spirit.

Kingsport's New Vision Youth group representing Sullivan County just returned from the Tennessee Teen Institute with a huge accolade.... they had more individual Spirit Award winners than any of the other 94 participating counties in the state.
The New Vision Youth Group was the only youth group from Kingsport at the gathering.

The Tennessee Teen Institute (TTI) is a five-day youth leadership and prevention camp sponsored by the Jackson (TN) Area Council on Alcoholism and Drug Dependency.  It's held yearly on the campus of the University of Tennessee-Martin.  The statewide conference brings together more than 400 teenagers from across the state to help them deal with teen issues like peer pressure, bullying, violence, suicide, teen pregnancy, teen health and substance abuse.  The idea is to recognize problem issues and hopefully stop them before they get started.  The education is done through programs, exhibits, discussions, question-and-answer sessions and interventions.

The kids are split up into various groups where they get to meet other kids from around the state.  It's thought that the interactive nature of the experience gets them to talk about issues among themselves, while the programs offer them solutions.  Institute staff and administrators guide them through the discussions.

This is the 12th year that New Vision has participated in the Institute, and all 26 Kingsport-area New Vision Youth members representing Sullivan County received Spirit awards.  Director Johnnie Mae Swagerty also took four chaperones to the camp two weeks ago and they themselves also received Spirit leadership awards.  "It's easy for the chaperones to get the children excited about TTI," she says.  "The kids look forward to it every year.  They get to renew friendships they've made, plus make new ones.  Many of the kids were shy at first, but once the program begins and they meet other students, the shyness quickly goes away."

One of those shy kids used to be Keyonna Benson of Kingsport (on the far right in this picture).  Coming from a single-parent household, she says she immediately bonded with other shy children in the New Vision Youth group as a child about 10 years ago.  Growing into teenhood, she learned about issues like the dangers of substance abuse, the harmful uses of tobacco and e-cigarettes, drinking and driving, and bowing to peer pressure.
"Growing up, the peer pressure was almost too great," she remembers.  "Fellow students wanting me to smoke with them, go drink, party.  If you didn't do that with them, then you were an outcast.  That was never fun."

She remembers coming to the TTI camps as a New Vision member while growing up and feeling better than when she first arrived.  "I have to say it helped bring me out of my shyness," she admits.  "It was great to be around people who share positive messages in the New Vision Youth, but then to find many others at the camp from around the state with the same message made it refreshing and fun at the same time."
"We actually had something to talk and be excited about," she says.
Keyonna graduated from Dobyns-Bennett High School in 2019.  Today, she has an associate's degree from Austin Peay State University and is working on her bachelor's degree.  She's also now on the Tennessee Teen Institute staff, helping to mentor students just as she was guided, to make the right decisions in life.  She considers herself a New Vision Youth and TTI success story.

"What makes TTI so special is that the kids yearning to make those positive decisions have found someone who roots for them," she says, leading a cheer, top left on the back row in this picture.  "There is a huge support system that's here all year long, not just the five days of the camp."
Keyonna is also proud of the New Vision Youth group and its Spirit Award recipients.  "Getting a spirit award isn't just about cheering the loudest or being the most involved," she says.  "As administrators, we look at how much genuine energy you put into the program and its message.  It doesn't matter how quickly you finish a project, it's how you finish it.  Your passion, your enthusiasm, your positive attitude, how the project becomes you."

"All of the kids go home with better ideas on how to deal with the problems of being a teenager," she says.  "At the TTI camp, we hope to equip them to go back home and face the challenges better than when they came.  They do that by sharing the same messages together."

"Even though the camp is over for 2021, we still talk to the kids who attended, no matter where they live," Keyonna says.  "At some point we've all needed the help and encouragement to deal with the pressures of teenage life.  TTI is just one week out of the year, but the support and the love the kids get from the program is year-round."
"And those friendships last a lifetime."
Posted by douglassriverview at 10:11 AM