"DEFYing the Odds: Our Young Children BEATING the Odds!

Those inspirational words from Neil Fisher, a counselor with the Johnson City Police Department, to young people from Kingsport, Johnson City and Chattanooga attending the DEFY program. 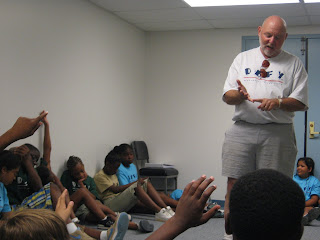 The kids were spellbound by the impact of his statements.

Locally, Mary Alexander, Andra Watterson and Johnnie Mae Swagerty of the Kingsport Weed and Seed office accompanied the youth from Kingsport to the camp.

"It was truly amazing," says Johnnie Mae Swagerty. "I watched some of our kids go into the camp with one attitude, and they came out with a completely different one. You could actually the change in them. It was discipline like we used to have
growing up." 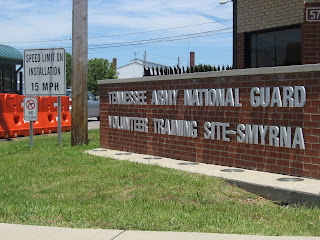 "We want them to learn a little bit more about themselves," says Sgt. Doug Edmisten one of the program organizers. "Mainly we want them to have fun, and learn that they can build relationships.. they just have to have a common key." 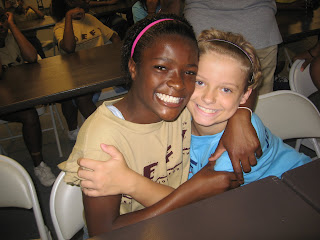 One of the classes led by counselor Fisher is called the "Three Things Exercise." In it, kids play an interactive game with each other where one child says three "good" things are said about other child, and the other child then responds with three "good" things. Then, three "faults" are recited to each other by the other person. The children had forged such good relationships with each other, that the "good" compliments flowed freely. When it came to naming the "faults," most of the kids could not bring themselves to name them, in fact.. some of them went out of their way to make the "faults" sound "good."

"Calvin, I believe this program is very important for the kids," said Pastor Ron Cook of Chattanooga, who was chaperoning the children from East Chattanooga Weed and Seed. "They're being asked to live by some standards.. they have to get up early, make their beds, do physical education, take orders from each other, and learn how to interact with other people. They also develop relationships with police officers
that work in our community, and I think that's one of the great things that is going to help them, once they leave this camp." 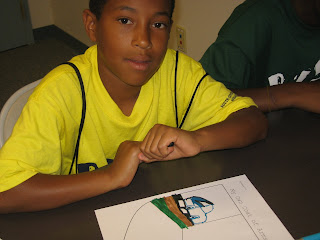 Another important lesson learned was during an exercise called "My Own Coat Of Arms," during which the children took a piece of paper with a shield already drawn on it. They then drew pictures from their families, their lives and their activities, denoting the important things in their lives. One child from Kingsport drew a picture of himself in class at the John Sevier Middle School.. another child from Johnson City drew a picture of herself at church, and a child from Chattanooga drew a remarkable resemblance to the U-T Chattanooga logo.

"The Put Down Exercise" shows the child how to react and respond when someone puts them down. Counselor Fisher gave each child in the class, and told them whenever he gave them a compliment or told them nice things, to blow one breath into the balloon.
"When we say 'bad things,' you have to let one breath out of the balloon," he says. 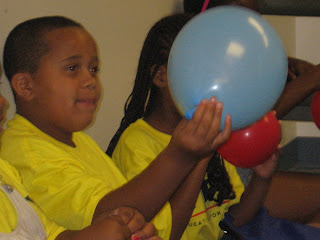 Deflated balloons were no fun to play with.

"It shows them that when they're built up with compliments and the balloon is blown up," says Linda Hoit, Johnson City Police Department chaperone. "They can see they're more happy, more content, and they feel good about themselves. When you do a put down, it makes you feel sad, mad, and as one little boy said, 'makes you wanna fight."

"We want our children to feel good, happy, and confident about themselves." 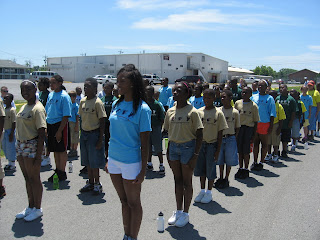 One of the more exciting events observed, was an outside drill exercise with all the kids. They were put in four groups of about ten children apiece. Several of them who demonstrated leadership qualities were selected squad leaders, who then led the groups in drill exercises similar to a boot camp. At the command "ATTENTION!" the kids snapped to, and shouted "GET HARD, NO MERCY!" The command "PARADE REST!", produced feet apart and hands clasped firmly behind in the small of their backs. At the command "PRESENT ARMS!", right hands were crisply snapped in salute, and "ORDER ARMS!" brought them back down firmly at their sides.

The kids loved every minute of it. Friendships were made, relationships were forged and bonds were cemented.

"I think it's important to get the kids out of their comfort zones," says Sgt. Edmisten. "It puts them in roles as leaders, and it also shows them how to get along with others." 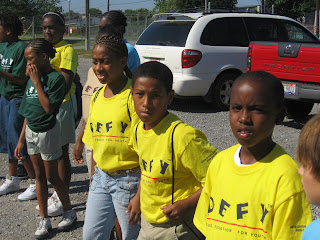 The week-long DEFY camp is the first part of a two-phase program, with the first being the week at the Tennessee Army National Guard Base. Phase 2 of the program is one weekend a month, where the kids continue to use many of the skills and activities they learn on the base during Phase 1. After a year, it's a formal graduation with proud parents, program participants, military personnel from the guard base, and law enforcement.
Posted by douglassriverview at 10:16 AM