"I'VE BEEN ALL OVER THE WORLD WITH MOTORCYCLE SHOWS, AND I THINK IT'S TIME TO GIVE BACK TO MY COMMUNITY."


MORE PICTURES OF THE RESTAURANT IN THE PHOTO GALLERY


Get ready, Riverview and South Central Kingsport. Good, ole-fashioned down-home cooking is coming to a fine restaurant to you. 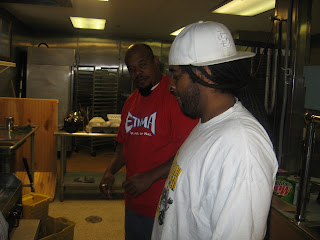 Dion Russell, probably one of the finest motorcycle stuntmen in the world, and a product of Riverview-South Central, hopes to tickle your taste buds with the opening of his restaurant, the Good Times Grill in Kingsport.

"We'll specialize in the best hot wings you've ever had," says Dion, who we all knew as "Dinkie" growing on the streets of our community. "We'll have good all-homemade soul food guaranteed to fill you up, and not empty your wallet. Meals will run about 7 bucks, and I'm hoping to set up a menu where the kids eat free on Sundays." 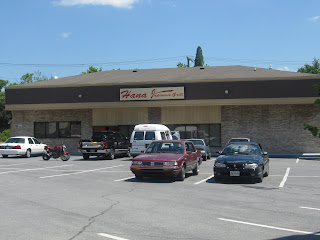 The restaurant is located at the corner of East Center Street and East Sevier Avenue. We sat down with Dion at the restaurant, during the hustle and bustle of putting on the final touches to open the business.

"I got the idea to open a restaurant while living in Jacksonville, Florida," he says. "My good friend down there John Henderson had a little restaurant in his neighborhood he hung out at, with a bar in it. Everybody loved that place, and it became a favorite gathering place for some very good people. I got to know some of the people who ran it, and they let me learn the ropes, the mechanics, the cooking techniques, where the money goes, and I sorta picked up on things."

"I looked at Riverview and South Central Kingsport, and knew my community needed this." 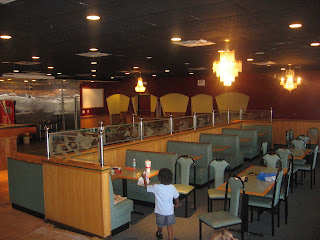 "When he first mentioned it," says Monique Henry, partner in the business, who also owns a daycare center, "I really thought he was just playing. But he kept talking about it and talking about it, and I knew he was determined to start it up. He's like that with the motorcycles, too, and you just have to let him do it. I have a good business background with the daycare, so I can help keep the books organized and the rules and regulations followed. I'm good at that."

Before this venture, Dion had established himself as quite a businessman in his own right.

"When I was 13, 14 years old, I wanted to be the best skateboarder in the world," he says. My first business was an urban clothing and records store near the U-T campus in Knoxville," he says. "It was pretty successful, with a good clientele. Then, I opened up the 'Down To Earth Skateboard Shop' in Johnson City, and then one in Kingsport, and I learned even more about business dealings. Friends and family in Kingsport always supported me, and my next dream was a family business, one that I could involve my family in. This restaurant came to mind. There was an oppportunity, and here we are."

"There was a Japanese restaurant on this corner, a Mexican restaurant, a Chinese restaurant.. none of those ever worked, and it's probably because of the community. You've got to fit the business in the community. You wouldn't go into an hispanic community and put a Greek restaurant. I think we'll do well here, because we're right on the edge of the African-American neighborhood and the white community. We'll serve good, home cooking that appeals to both." 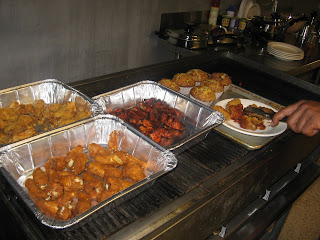 "Hot wings won't be the only thing we'll be famous in Kingsport for," he says. "Pork chop sandwiches, fish, chicken, macaroni and cheese, good collard greens, cornbread, sandwiches, steaks, baked potatoes.. you name it. We'll fix it like Mama used to make."

Seems that Mama AND Grandma gave Dion a lot of inspiration for the restaurant. "My mama Sherry was a good cook, but she learned from the master. My grandma Ethel Ruth, cooked for almost 30 years at Eastman. This restaurant is sorta dedicated to her good home cooking.. I've been trying to find a way to get her out of retirement," he laughs. 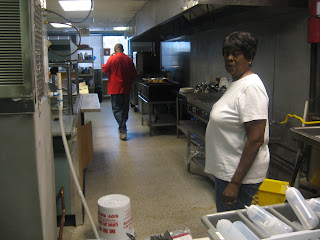 "I was up every morning at 4 A-M to be at the Eastman Cafeteria by 5," says Mrs. Ethel Ruth Russell. "I started out when the cafeteria was in the old Building 89, the same building where Eastman had the Horse Krickers. Then we moved to Building 70, and then 102, and when I retired, we were in Building 284 over by the Eastman Gift Department. I did breakfast, biscuits and gravy, sausage, pancakes, eggs, ham, bacon, toast, you name it. We saw hundreds of people every day."

"The reason I know so much about good cooking is from one person.. Ray Leeper," Mrs. Ethel Ruth remembers. "He was such a good cook, and taught me so much about little things that make food good to eat. I've still got some of his recipes for old-fashioned chicken-n-dumplins, turkey and dressing, homemade rolls. You're in for a treat." 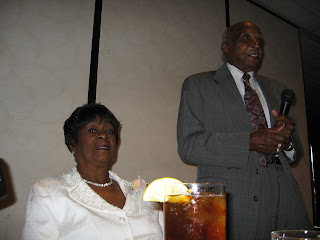 "Mr. Ray and I always talked about opening a restaurant," says Dion. "Two months later, here we are. He gave me this dream, this ambition, and then left us. I feel like he's sitting here right now, saying 'O-K, you're on your own.. let's see what you got.' He gave my grandma her hope and inspiraton, and she's passed that on down to me."

Mrs. Ethel Ruth also remembers when Riverview had its own stores and restaurants, all owned and operated by blacks. "Right out here on Oak Street and East Walnut (now East Sevier) where the Sneeds used to live, there was a trolley car, and the folks who ran it had sandwiches and things, and people really loved the food. Mr. Emmitt Collins had his store on Lincoln Street, and he had a lot of people coming and going. Black people really supported each other back then."

"Hopefully, this restaurant will bring back some of the past, and bridge it to the present and future." 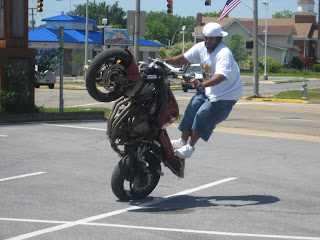 There is one burning question, though.. will the new restaurant keep Dion away from the dangers of his motorcycling?

"I doubt it," laughs Mrs. Ethel Ruth. "I worry about him on them motorcycles, but they're his passion. I think he'll probably have a lot of us working for him when he's off on motorcycle shows." 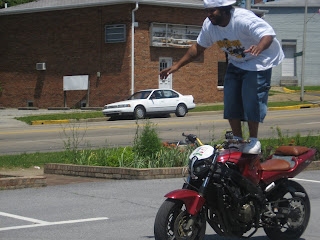 Advertising won't be a problem for Dion. As he was practicing his stunt riding in the parking lot of the restaurant during a break in putting on the finishing touches, a crowd of people waiting at the Center Street-East Sevier red light gathered to watch. In fact, many of them sat through the red traffic signal, fascinated by the stunts he was put on. "The motorcycling goes with me whereever I go," he says. 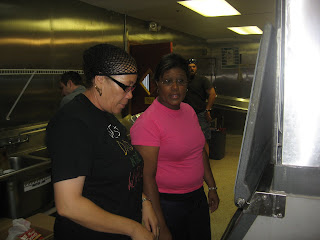 "We'll have 'bike nights," says Dion. "Also, pool tables that are separated from the eating areas, gospel singers, jazz musicians, comedians, just a little bit of everything that caters to everybody."

"I've also got to give a shout-out to Johnnie Mae Swagerty," Dion says. "She has been a blessing to me. Every time I would see her, she'd be out cooking fried fish, raising money for various causes. Her enthusiam just gives me so much motivation, I just had to get her in her, with her community involvement. She's a great addition around here." 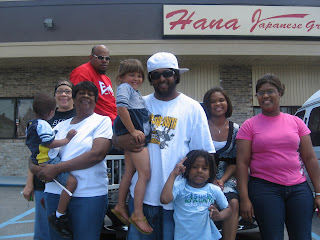 As he hollers for his son Prince, who has wandered outside, to get back inside the restaurant, Dion "Dinkie" Russell sees only a bright future for the Good Times Grill. "With gas prices so high, folks aren't traveling a lot, and they're not going to the big, expensive restaurants much. They're looking for a good place with a family atmosphere where they can bring the kids that's safe, and everybody can get a good bite to eat at a good price."

"We'll have that at the Good Times Grill, and even more."
Posted by douglassriverview at 10:46 AM