Below is an exclusive unedited interview with Kingsport Mayor Dennis Phillips, who spoke with the Sons and Daughters of Douglass Website, after reading Alderman Ken Marsh's comments about proposed renovations to the V.O. Dobbins Center, that would include a new Kingsport Non-Profit Center. The center would contain all or most of the non-profit agencies in the city.

WHAT WAS YOUR REACTION TO ALDERMAN KEN MARSH'S COMMENTS ABOUT THE PROPOSED
V.O. DOBBINS CENTER RENOVATIONS, THAT WOULD TRANSFORM THE BUILDING INTO KINGSPORT'S NON-PROFIT CENTER? 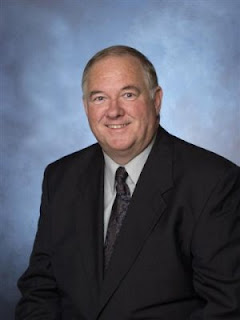 Well, my reaction was, that I wasn't surprised at all.. Alderman Marsh always has the tendency to talk about a lot of things, when it comes down to spending the money, and in fact, any great idea.. That's always one of the problems Kingsport's had, is that we have many, many good ideas, but when it comes down to the funding, we just can't swallow down and fund the quality of life issues that need to be done, and that's one of the things I've tried to change is.. let's don't study everything for five years, for example putting the archives over the library when it comes down to funding it.
Anything that you do, has a price attached to it, and you should know that on the very front end, and the V.O. Dobbins Center is no different. You know yourself Calvin how many years that the city has vaguely made promises that something was going to be done about the V.O. Dobbins Center, and it's time, just as I said when I was running for Mayor, it's time for action on some of these things, and that's what we're doing, and we're doing it without tax increases.. we're doing it in a responsible manner and I'm sorry if some of the board members don't agree with that.

WHEN IT COMES TO THE V.O. DOBBINS CENTER, DOES ALDERMAN MARSH) HAVE A VALID POINT IN THAT, THIS IS MONEY THAT MAY BE ABLE TO BE BETTER SPENT SOMEWHERE ELSE, AND MAYBE NOT BE SPENT TO RENOVATE THE CENTER INTO A NON-PROFIT CENTER?

I don't think he has a valid point, I think he has an opinion. You can always argue "is government competing with the private sector?" You can make a valid argument about that on just about everything we do. When we issue grants for loans, we're competing with the banks. When we do the transit system, we're competing with the local taxes. I could go on and on and on with this list. What we're trying to do with the non-profit center, is develop a situation to where in some cases, it lowers the rent enough to put more money back into the non-profit agency's mission. In some cases where they can't pay rent at all, it provides a space for the small
non-profit organization to survive. We've got small spaces that maybe one or two people-organizations that may need a little space, maybe just a little room and maybe we can provide that. Mostly it's an efficiency situation.
Our Downtown Kingsport Association for example, you've got a two-person office.. you've got one person out, one person away, and the phone's not getting answered. Or you've got a copier that you're paying $3,000 a month for, and it's only being used 3 per cent of the time. It's a scale of efficiencies that we're trying to do. The Douglass School is a part of Kingsport's history, and if you don't believe that history is to be preserved, then you probably wouldn't believe in this (the planned
renovation), but it's down to individual opinions and the majority of the board (of mayor and aldermen) certainly agree with what we're doing.
The fact that the Red Cross decided not to go there and were taking an entire floor, yes, it's only prudent that we look at that and see that we were building this 2,000, 2,500, 3,500 square foot floor for the Red Cross.. now, they're not going.. if we don't look at that phase of it, we wouldn't be doing our jobs. But there may be others that want to take up the slack from the Red Cross, but we have to spend taxpayers' money in a way that serves as many as we possibly can, so yes, we'll look at the Red Cross situation and we may scale back that portion of the building, we may
and we may not. We don't want to build space to just sit there.

ARE YOU OPTIMISTIC THAT YOU'LL FIND SOMEBODY TO REPLACE THE RED CROSS?

First of all, personally, I'm not convinced, after further discussion with the Red Cross, after they analyze it more, that they may not go there. What we're competing with concerning the Red Cross is, they don't pay anything for anything where they are now. Their board is faced with making a very difficult decision: do we commit to the non-profit center, or do we stay here? Well, if we stay here, it's zero.. zero may be for one more year or it may be two, three, four, five years.. we don't know.

I UNDERSTAND THEY HAVE A LEASE WITH BAE SYSTEMS.. AND THAT COMPANY SAYS, THIS BUILDING CANNOT BE EXPANDED, SO AS FAR AS GROWTH, YOU CAN'T GROW ANYMORE IN THIS LOCATION, SO AT SOME POINT YOU'RE GOING TO HAVE TO MOVE, AM I HEARING THAT CORRECTLY?

Well, I'll give you my understanding. I don't know about a lease. BAE provides them the building, and at any time BAE decides to abandon that land over there (on Wilcox Drive) and they have talked about doing that, then that land will revert to the government and will probably be sold, and BAE has discussed that. Then, that would possibly mean that the Red Cross would have to look for another place, unless whoever bought the land or the government that owns it decided they could stay there under the same terms and conditions. That's the uncertainty, and then two years from now, the Red Cross would have to relocate, and instead of paying the city at 5
dollars a square foot, they may have to pay more somewhere else. If we have to scale back at V.O. Dobbins and not build, they may want to relocate in two years, and there may not be a space available for the Red Cross. And I don't want to get put in the middle of that happening. I want the Red Cross to fully understand, and we will send them a letter to this effect, if they do not want to consider the non-profit center, and one, two, three years down the road, they need to move, there probably will not be a space in the non-profit center for them, because we will probably not build that space originally planned for them. I don't want us to be put in the position of looking like the bad guy two or three years down the road
because we wouldn't let the Red Cross in.

ALDERMAN MARSH SAYS, THERE IS PLENTY OF OTHER OPEN OFFICE SPACE IN MANY PLACES IN KINGSPORT..

Well, there is open space in Kingsport, I don't know about all over Kingsport. The going place used to be downtown, because rent was very inexpensive there. Rent downtown has probably doubled or tripled in the past three or four years, which means that the bottom dollar price that it used to be as gone up. We're talking about, in the non-profit center, between 5 dollars, 5 dollars-and-a-quarter per square foot for rent, utilities, janitorial, supplies and everything. I don't think that anyone can find compatable space at another locations.

YOU MENTIONED THE QUALITY OF LIFE ISSUES THAT THE BMA HAS TO TAKE UP FROM TIME TO TIME.. DO YOU SEE THE NON-PROFIT CENTER AND THE OTHER V.O. DOBBINS CENTER RENOVATIONS AS A POSITIVE THING FOR, NOT JUST THE RIVERVIEW NEIGHBORHOOD, BUT THE CITY AS WELL..

Well, you always look at neighborhoods.. you look at Ridgefields, you look at Sevier Terrace, you look at the Maple Street area, every city has its own special neighborhoods.. I'm just tired of this community (Riverview) being associated with second-rate or failure. Riverview is a community located inside the city limits of Kingsport with a ton of history, and it's just like any other that we should be proud of and do the most, as much for, as we can, and make it a community that you're proud to be a member of, a part of, or locate within. As communities deteriorate, as they all do, we need to give them more attention for a while. We should always be working on quality of life issues. I think one of the problems Kingsport has had, as we formulate a budget, is total our basic necessities, and
we've ignored the quality of life issues in that community for many years.
I think quality of life issues are a very important part of what government
does. Otherwise, we just need to set the tax rate, just have the basic number of policemen, pick up the minimum amount of garbage, and we don't need a municipal swimming pool, we don't need a senior center.. all those are quality of life issues, and I think quality of life is something that our community does better than other communities. That's what makes people want to move here. There's a reason we haven't had growth in the past 20 years.. we've not given people a reason to move here. What advantages have we got here, that make us better than Johnson City, Knoxville.. Now that we're spending money on quality of life issues, some people are having heartburn over it.

EVEN WITH ALDERMAN MARSH'S COMMENTS AND OPPOSITION, YOU'RE STILL COMMITTED TO THE NON-PROFIT CENTER AND THE RENOVATION OF V.O. DOBBINS?

I am totally committed to the renovation of V.O. Dobbins. I am totally committed to additions to V.O. Dobbins. I'm not going to be in favor of building space anywhere that just sits there without a deed, and we'll look at the Red Cross situation, but as far as renovating V.O. Dobbins, I firmly believe it will happen and we will make an addition to V.O. Dobbins for the Douglass Reunion deal (the Douglass Alumni Association and the Sons and Daughters of Douglass website headquarters).. that's going to happen.
We'll look at the second and third floor of the center, and see what's best for all of the offices and the needed amount of space. A lot of that will be determined by who comes forward and says, 'hey I'm interested,' just like the American Legion did.
Posted by douglassriverview at 10:51 PM