Organizations committed to the nonprofit center include the United Way, American Legion and the Upper East Tennessee Human Development Agency.

KINGSPORT — City officials held a meeting last week with a group of Kingsport nonprofit organizations to see if any were interested in moving into the new nonprofit wing of the V.O. Dobbins Community Center.
The meeting came about a month after the American Red Cross of Northeast Tennessee told the city it would not be relocating to the new nonprofit center.
Kingsport is planning an $8.7 million renovation and expansion project at the V.O. Dobbins Community Center. Construction is expected to begin in late fall and take about 18 months to complete.


THE LARGEST SECTION OF THE OLD DOUGLASS SCHOOL..THE CAFETERIA IS ON THE FIRST FLOOR TO THE REAR OF THE BUILDING WHERE THE CARS ARE LINED UP..THE ASPHALTED COURTYARD IS TO BE TORN UP AND TURNED INTO A FLOWER GARDEN WITH WALKWAYS AND BENCHES 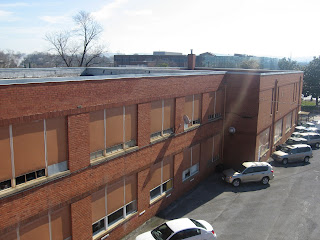 The project calls for demolishing 13,600 square feet of the existing building, renovating the remaining 46,000 square feet, and adding a little more than 50,000 square feet of space —30,900 of which will be a new nonprofit c e n t e r.
Organizations committed to the nonprofit center include the United Way, American Legion and the Upper East Tennessee Human Development Agency (UETHDA). In addition, Kingsport is allocating space, computers and furniture for the nonprofit Douglass Alumni Association and the Sons and Daughters of Douglass Web site free of charge.
The Red Cross was expected to go into the center, but its board voted in May not to make the move, primarily for financial reasons. This caused the city to consider whether the project should be scaled back or look for other nonprofits to fill the space once assigned to the Red Cross.
On Tuesday, Chris McCartt, assistant to the city manager, held a meeting with seven Kingsport nonprofit organizations to apprise them of the progress on the project and gauge their interest in moving to the community center.
“These were groups that had been invited to a meeting held by the mayor on his vision for a nonprofit center. This was a follow-up meeting to let them know the progress and see if there was any interest in any of them going into this site,” McCartt said. “Many of them had seen it in the paper or discussed it at the previous meeting, but they did not have specific information, such as cost per square foot, the intent of the building and of the project.”
McCartt did not release the names of the organizations since those present were staff members and possibly had not discussed the issue with their respective oversight boards. 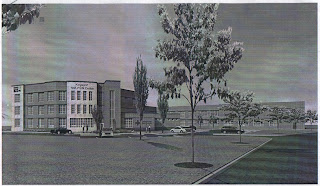 As for whether the nonprofit wing of the center would be scaled back, McCartt said for now the plan is to leave the design as it is — a three-story structure.
“However, we have looked at an option that removes about 3,000 square feet from the nonprofit wing,” he said.
The UETHDA initially was slated to be relocated to the third floor of the nonprofit wing, but McCartt said after further discussions, the city decided to move it to the first floor of the center.
“(The third floor) was not a good location. We have now relocated them down to the first floor, utilizing part of warehouse built in there for the Red Cross,” said McCartt. “They really have a need for easy access and a ground-floor setup. I think it will be a great fit for them.”
Over the next 30 to 45 days, McCartt said the city would like to hear back from the seven nonprofit organizations to see if any are willing to make a strong commitment to relocating to the nonprofit center.
“So we know what we’ve got, going into the construction design phase of this project,” he said. “It will give us an idea as to who is committed, and we can start putting some of these puzzle pieces in place so we know who for sure is going to be on the third floor, the second floor and first floor.”
Posted by douglassriverview at 11:51 AM