Dusting Party: Getting The Douglass Schoolbooks Ready For Sale!

Nobody ever thought they'd ever see their old school books again.

It makes sense.. you graduate a grade in elementary school, and move on up to the next grade. What good would your old school textbook do you?

"It's the history behind the books," says a former Douglass School alumnus. "Those basic school books taught us about life.. our teachers helped us interpret them."

And those books are not lost to the ages.

MORE PICTURES OF THE BOOK DUSTING ARE IN THE PHOTO GALLERY 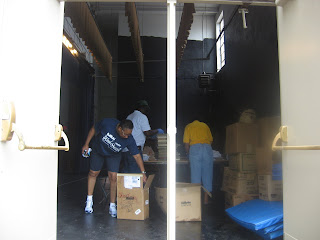 Several members of the Douglass Alumni Board of Directors gathered to dust off many of the old books, getting them ready for the first Douglass Book Fair, to be held the weekend of Friday and Saturday, August 8 & 9, 2008. No book will be sold for over $1.00, and most are in good condition. Proceeds will go to the Douglass Alumni Association General Fund, to support programs and expenses of the association.

Many familiar school books, from 1st grade, on up to the 12th, were discovered in the second floor lockers of the V.O. Dobbins Sr. Community Center, formerly the Douglass Elementary-High School building on Louis Street in Kingsport. The books, which were packed away in the lockers because building custodians did not know what to do with them when Douglass closed in 1966, were caked with 42 years of dust.

Caked.. but not BAKED. 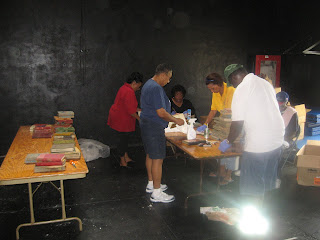 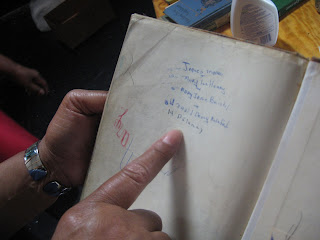 What makes the books so valuable, is one other item in them.. the name of the former student or students who used it. Thanks to Dawnella, many of the books are now catalogued by a list of some of the names in the books and the type of book it is, some of them including messages, that made the school unique to that particular person. Unfortunately, some of the students are now deceased, but they might hold significance to survivors. If your name is listed below, we have your or your loved one's school book (THIS IS ONLY A PARTIAL LIST):


Some of the books have messages in them, too. "Linda Eller Loves Butch Foster very much & won't admit it," "This book belows to Mack Ellis, not Alvin."

More names will be added soon.

Again, THIS IS ONLY A PARTIAL LIST of the names and personal writings in the books. 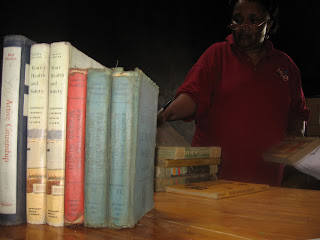 Again, the first Douglass School Book Fair will be Friday and Saturday, August 8 & 9, 2008 in the Douglass Ball Field and the V.O. Dobbins Sr. Community Center, during the CBS Youth Explosion Concert. No book will be priced over $1.00, and first-come, first-served. Reservations can be made for each book, but arrangements to get them is at the buyer's discretion. 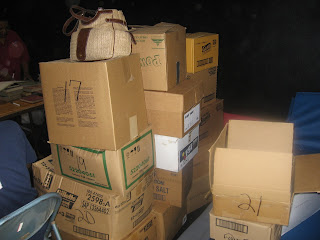 Please support your Douglass Alumni Association in this historic endeavor, as we strive to keep the name of our fellow school alumni alive, and we put some still-vital school books back in the hands of the students and family who learned the skills of life from them.
Posted by douglassriverview at 12:08 AM