Hundreds of kids in Riverview and the Kingsport community have discovered probably the best-kept entertainment secret of the summer.

The Riverview Splash Pad has become an oasis of fun, in a season surrounded by nearby construction and neighborhood revitilization.

MORE PICTURES OF THE SPLASH PAD IN THE PHOTO GALLERY 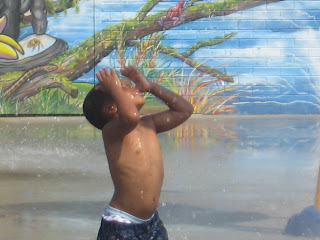 The Splash Pad has been open a year and a half, and it's getting rave reviews in its first full season of operation.

"The safari theme has been instrumental in grabbing the children's attention," says Kitty Frazier, manager of Kingsport Parks and Recreation. "The murals on the walls of the splash pad building are eye-catching items that peak the child's interest immediately. It was easy using the safari theme by using the Douglass Tigers, which were originals to the community. The colors and intrigue of the murals, demonstrate how the splash pad can be a fun place." 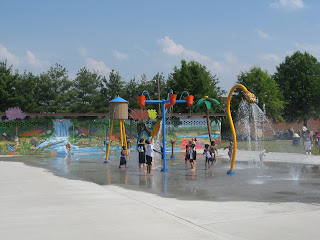 "The splash pad concept is actually safer than the old swimming pool that used to be there," says Mrs. Frazier. "There's no standing water, so there's much less risk of drowning and those types of accidents, as well as allowing something for the much smaller children to use, the toddler-age children, who can play and have a good time with all the water features. They're just a lot safer."

"The old pool was leaking considerably, and it wasn't being utilized often.. the pool itself was losing a lot of water and chemicals into the surrounding ground and pretty soon, it became a safety issue. It was time to make a change and move the pool into a new direction for the community." 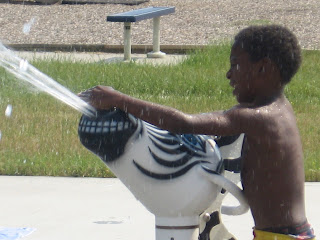 It's hard to estimate the number of gallons of water going through the pumps at the Splash Pad. "All of the water is recycled," says Mrs. Frazier, "and it's not nearly as much water usage as the old pool. But it is a chemically-treated system of water recirculation just like the old pool, just like you'd have in a regular pool. It's far less expensive to operate."

Many Riverview residents (your author included) learned to swim in the old Riverview pool, and that thought is not lost on the Parks and Rec Department. "If kids need to learn how to swim, which every child should know how to do," Mrs. Frazier says, "the Red Cross offers swimming lessons during the summer at the Legion Pool on Memorial Boulevard. The cost is $10 per lesson. Just call 423-224-9458 to schedule an appointment." 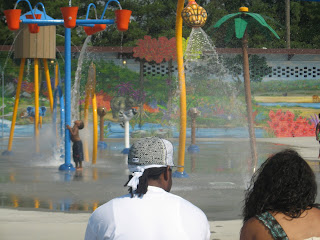 Speaking of appointments, many parents keeping watchful eyes on their children frolicking at the Splash Pad, share restful times underneath the nearby shelters on the Douglass Ballfield. Those shelters are also available for get-togethers and picnics. There is a small fee to reserve a shelter, but that is just to guarantee the particular shelter will be available whenever needed. The number to call to reserve a shelter is 423-224-2489. 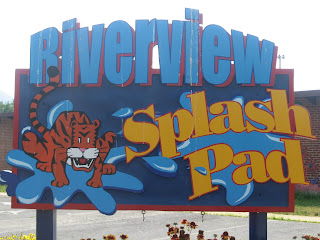 "We anticipate the popularity of the Splash Pad going up considerably, once the nearby HOPE VI homes and the V.O. Dobbins Center renovations are complete," says Mrs. Frazier. "All of the improvements in the neighborhood will produce a wonderful place for people to live, come to, and have fun safely."
Posted by douglassriverview at 10:53 AM