The Zulu Connection: Kingsport Children Connect To Their Past

"What did you do this summer?"

Some children with Kingsport's Parks and Recreation Department will have an interesting story to tell, if they get asked that question.

Their answer will be: "I learned that Africa is a different place than what I've seen on TV."


MORE PHOTOS OF THE ZULU CONNECTION IN THE PHOTO GALLERY 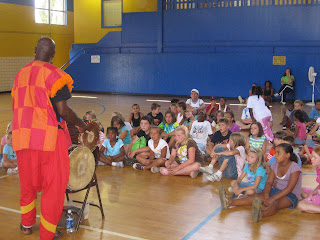 Thanks to the Zulu Connection's demonstration at the V.O. Dobbins Center on July 14, 29\008, Parks and Rec children learned there's more to the continent of Africa, including that very consideration.. is Africa a country, or a continent.

The Zulu Connection is a program that highlights many aspects of African Life. It is performed by the Zulu Family from New Orleans: Shaka Zulu, his wife Naimah, 10-year-old daughter Sarauniya, and a host of other performers.

Children were treated to native drum rhythms, and how intricate they can be. The polyrhythmic movement between countries in Africa have an almost hypnotic effect on the native tribes in Africa, and it was easy to see how the children got wrapped in into the rhythms. Most of the children adapted the drum sounds to their modern-day music sounds, and the results were very effective. Some of the kids even got to beat on the drums in a cadence.. many of them learned very quickly.

"We like to give the children a more positive perspective about the things Africa has to offer," says Mrs. Zulu. "Usually, when we ask kids what they think when they hear the word 'Africa,' they think 'starvation,' 'poor,' 'no clothing,' 'war,' things like that. We have to let them know that especially on the clothing part, that Africans are some of the best-dressed people in the world."

"Africa has its Gold Coast, where all the world's gold comes out of," says Mrs. Zulu. "Diamonds are coming out of Africa, bauxite.. all the minerals needed to make elevators, to make computer chips, cellphones, what-have-you.. a lot of those minerals come out of Africa, so we'd like for the children to know that Africa is not just sitting there. The world needs Africa."

Since 1996, the Zulu Connection has done African demonstrations all over the world, in China, Germany, and Switzerland, to name just a few countries. The Zulu Family were in Kingsport at the V.O. Dobbins Center, courtesy of the recent Kignsport Fun Fest 2008. Their visit was sponsored by the Kingsport Arts Council, the Southern Arts Federation, and the Eastman Chemical Company.

And what does the family want the kids to take away from the demonstrations?

"We want them to be open-minded, and not to close in and just think of America and that's it," says Mrs. Zulu. "Be worldly, be more sophisticated. For the African-American children, appreciate where they come from, their ancestry and heritage, and for the white children, appreciate who they hang out with, their friends. Appreciate everyone's culture, and know that no culture is better than another person's culture.. it's just different."
Posted by douglassriverview at 3:59 PM