Witness statements and physical evidence at the scene indicate that Jamarion was struck once by the pickup truck’s right rear tire as the vehicle was moving forward.

Erica Yoon —eyoon@timesnews.net
Family and friends gather at a memorial to Jamarion Carpenter, inset, in the courtyard at Lee Apartments on Wednesday. At center, Nadine Skaggs, Jamarion’s aunt, helps a child light a candle at the memorial as Jamarion’s mother, Chardonnay Carpenter (third from left), and others look on. 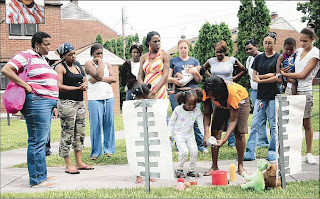 Marshall has been placed on administrative leave pending the outcome of the investigation.
Robinson said witness statements thus far and physical evidence at the scene indicate that Jamarion was struck once by the truck’s right rear tire as Marshall was moving the vehicle forward. According to earlier reports, Marshall had driven up to a storage unit to unload some boxes and was driving off the grounds through the grassy courtyard.
Although there were reports of as many as 30 to 35 people on scene when police and EMS arrived, Robinson said he’s only aware of three witnesses who saw the pickup hit Jamarion on his bike — and all three are children.
Robinson said Sgt. David Moore spoke with Marshall about the incident, but Moore was unavailable to talk about it, and Robinson said he wasn’t familiar enough with what Marshall had said to make a comment.
“We are continuing to investigate as rapidly as we can. There’s just a lot of things to do, and it does take a certain amount of time,” Robinson said. “We’ve got people working on that, and we hope to have this thing wrapped up very soon.”
He couldn’t provide a time frame regarding when the investigation might be complete.

As the investigation continues, Frontier Health’s Tim Perry said counselors would be available to the Lee Apartments community over the next couple of days to help Jamarion’s family, friends and playmates cope with the t r a g e d y.
“We have talked with a number of the kids here,” Perry said. “Many of them have shared times that they played together. They’ve done some memorials. The things that they remember that they did together with him, fun times, toys that they played with together.”
“This community is helping itself and helping one another through it,” Perry said.
“(Jamarion) was just being a kid out here riding his bike, and a truck came through here. It had no business coming through here at that size. He wasn’t looking and he ran my baby over...” Jamarion’s mother, Chardonnay Carpenter, said Wednesday.
Her sister, Nadine Skaggs, said it’s not unusual for KHRA vehicles to drive through the grassy courtyard.
“There was 15 to 20 kids, all of them riding, and he just happened to be the one that got hit,” Skaggs said.
T.J. Hamler said he had just dropped his girlfriend off in the vicinity of Lee Apartments when Jamarion’s mother came running, telling him she needed to use his phone to call 911.
Hamler, who learned CPR in college, said he ran over to see if he could help and was shocked at what he saw. As many as 30 people created a chaotic scene around the truck, crowding around asking questions. Another man, Joe Beard, said some people started yelling racial slurs at the driver.
“We don’t need to ask questions, that’s not the point,” Hamler said he told the crowd. Then he turned his attention to Marshall. It seemed logical to get the huge truck off the little boy so he could breathe, Hamler said, so he began telling Marshall, “You need to move, you need to get off him now.”
“He didn’t want to listen, so I screamed at him for about five minutes telling him you got to go,” Hamler said.
“I don’t even think he realized that he had — but he had to though, because we were both standing at the back of the truck looking at the kid. Like we both, he was standing right beside of me, and we looked up under there and seen the kid’s head, that’s all you could see. You could see his legs coming out from up under the truck and his face coming out from up under the tire — the right rear tire,” Hamler added.
At some point, Hamler said Marshall did move the truck forward 5 or 6 feet.
“I thought (Jamarion) had a slight pulse. I was telling everybody else to be calm, then he took what seemed to be his last breath. He gasped, like, two times ... and I knew it wasn’t good right there. I brought his momma to the hospital and called up there a few minutes later and he was dead,” he said.
Beard said he was drawn to the chaotic scene by a friend who was afraid the boy under the truck was his own son. She had seen his son’s bike laying nearby and ran to get him, he said. Although it wasn’t his son that was injured, Beard said both his son and daughter were playing in the courtyard at the time of the incident and were among those traumatized by what they’d seen.


Erica Yoon —eyoon@timesnews.net
As his mother, Kia Lewis, and brother Bry’kiuse Lewis, 2, watch, Bryius Lewis, 6, signs a poster at the memorial for Jamarion Carpenter at Lee Apartments on Wednesday. 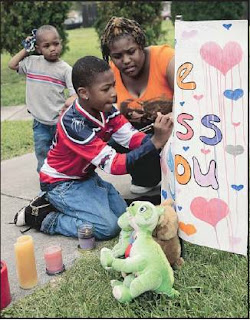 About 1 p.m. Wednesday, about 24 hours after Jamarion was struck, several children could be seen standing around a small memorial talking with counselors and describing what they saw as some of them placed stuffed animals and candles by poster boards covered with words of love for Jamarion.
Posted by douglassriverview at 10:07 AM