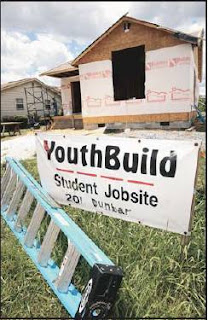 KINGSPORT — A little known community development program in Kingsport has been awarded a fourth grant this year — just over $1 million — and will use the proceeds to continue its mission of helping troubled youth and building affordable housing for the community.
YouthBuild USA is a community development program that works with troubled young men and women 18 to 24 years old helping them earn a GED, learn job skills, and work on building affordable housing.

COFFEY, COX AND WHITE WORK TOGETHER TO INSTALL A DOOR 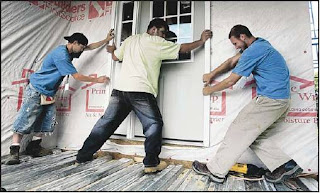 The Kingsport chapter of YouthBuild has received three previous grants — the first one in 2006 for $400,000, which had 32 youths in the program building two houses in Carter County.
Next came a stand-alone program in Johnson City where state and local Workforce Investment Act money allowed 14 youths to be in the program building one house in Johnson City.
The current grant funding the program is for $700,000 and serves 44 youths building four houses in the Riverview community. Two of these houses are currently under construction.

JONATHAN HYATT, DUSTIN WHITE AND TRAVIS RYBECK WORK TOGETHER TO BUILD THE SCAFFOLDING AGAINST THE HOUSE 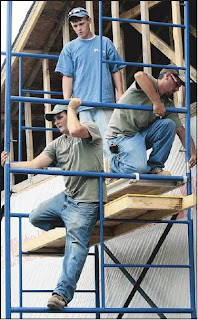 The new grant — for just over $1 million — came from the U.S. Department of Labor and will allow the Kingsport office to serve 60 youths and build four houses along Robertson Street in Gibson Mill Village.
Joe Wallin, program coordinator for the Kingsport office, said the new group of students should be ready to go by Sept. 1.
“I think it’s definitely making a difference and by far the most rewarding program I’ve ever been affiliated with,” Wallin said. “To see these kids come in, almost broke and facing fines ... the way their attitude changes, to find out they can learn, do and accomplish things. I feel like they become an asset to the community rather than a liability.”

AUSTIN COX PUTS DOWN GLUE FOR A DOOR THAT MELINDA WOLFE, CORY WHITE AND THOMAS COFFEE HOLD AT A NEW HOME AT 201 DUNBAR STREET, UNDER CONSTRUCTION THROUGH YOUTHBUILD IN KINGSPORT 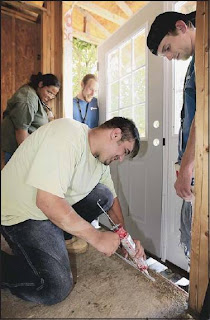 The six- to 10-month program helps young men and women earn their GED, train them with employability skills and help them with support services, such as obtaining a vehicle and house and resolving any eyesight or dental problems. In return, the students help build affordable houses for the community.
“Our goal is to get them their GED, train them, and once they leave the program they’re ready to go to work. We teach them work ethic skills, stimulate a lifelong love of learning, and we try and turn out exactly what an employer would be looking for,” Wallin said. “They’ll understand getting to work on time, staying on task, being dependable and being honest. That’s where the comprehensive part comes in. We address everything in their life that would be a barrier to them being successful.” 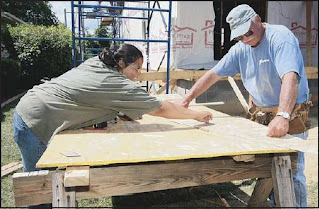 Wallin said the people who typically enter the program have been high school dropouts or had unsuccessful runs with adult education. A high percentage have also been in the juvenile justice system and come from single-family homes or foster care. Most are males, but each class has had one or two females, Wallin said.
“We have a three-week mental toughness program on the front end, and they have to have perfect attendance, right attitude and prove to us they’re ready for this training,” Wallin said. “Once they get through the toughness program, we have an almost 100 percent graduation rate.
“They are with us through completion, tell us what they want to get into (and) we try and find them a job with a contractor who has that kind of job.”
Jesse Hall, 26, of Elizabethton went through the first local Youth-Build program in Carter County three years ago. At the time, Hall was making little money at a local factory and living out of his vehicle and on the couches at his friends’ houses.
“My friend got fired, and I went to the unemployment office and saw a flier there about the Youth-Build program,” Hall said. “I thought that would be good for my little brother, but I talked with Joe (Wallin), and we hit it off. Then I joined the program.”
Hall, who came to the Tri-Cities about 10 years ago from California, described his early life as challenging, growing up in trailer parks and public housing, failing school miserably and dealing in drugs. 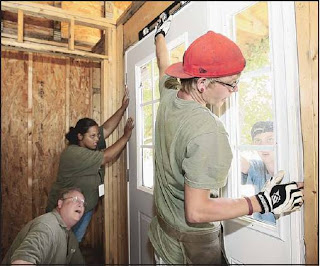 While going through the program, Hall said YouthBuild officials helped him get a loan for a vehicle and a house, cleaned up his credit, and paid off a number of medical bills from California. Hall said his life has turned around, and soon he will become a father.
“Going there every day got me in the steady pace of going to work every morning, right when you wake up. That helped me that much there,” he said.
Things worked out so well for Hall that YouthBuild offered him first a temporary computer position, then later another position working in the Kingsport chapter office.
Hall said YouthBuild really turned his life around, adding he has turned down other jobs since then, choosing to stay with Youth-Build.
“I was not a good person. This is my way of giving back and helping people, doing the opposite of what I used to do,” Hall said. “That’s what makes me feel good. I love the job because it makes me feel good about myself. 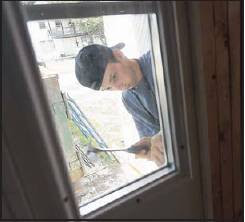 YouthBuild USA began in 1990 and is part of the U.S. Department of Housing and Urban Development.
The Kingsport chapter of YouthBuild is located in the Riverview community, just down the street from the Fresh Start office — its office is an old beauty shop, while classrooms are held in the old Club 229 building.
The organization partners with a number of local nonprofits, including Eastern Eight, the Kingsport Housing and Redevelopment Authority and the United Way.

STILL TO COME---A FUTURE ARTICLE: African-Americans also working in the Youth Build Program in Riverview who have witnessed the decline of the community, and are working to rebuild their community, while also working on their lives.
Posted by douglassriverview at 9:52 AM