Wrestling promoter Jeff Tankersly was inspired by the efforts of 9-year-old Savion Jamar to collect money for the Shriners.

KINGSPORT — Savion Jamar cherishes a tackle in a football game or a hit in T-ball probably more than his teammates. The fight to walk, then run, defines his stand in life.
Savion, 9, of Kingsport was born with a clubfoot and has gone through several surgeries at the Lexington, Ky., Shriners Hospital since he was 1 year old. 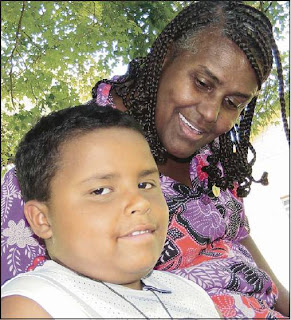 Savion Jamar, 9, and his grandmother, Veronica Kemp, have collected thousands of aluminum pull tabs to help raise funds for Shriners Hospitals. Savion has undergone several operations to repair a clubfoot, and he collects the tabs as a way to pay back the organization.

Now his physical condition has improved dramatically, and his mental capacities are totally focused on helping kids who have to go through the same things he did and the organization that took him back and forth to surgery and doctor’s visits.
“I’m paying them back for what they did for me, and I want other kids to get the help I did,” said Savion, who is away at summer camp this week.
For several years, Savion has been collecting aluminum can pull tabs for Shriners Hospitals, which recycle the tabs for money that goes directly back into patient care and equipment purchases.
“I’ve seen him dive into trash cans for them,” said his grandmother, Veronica Kemp.
“He sees somebody with a pop can, he makes sure he gets the tab off of it. I just can’t believe the drive he has to do this. He’s just so passionate about it, and him only 9. I guess it just says a lot about what kind of kid he is. He’s my baby, but there’s more to him.”
Savion caught the eye of local businessman and wrestling promoter Jeff Tankersly last week during Fun Fest when the youngster was out finding and collecting can tabs, so Tankersly has decided to help the fourth-grader and Shriners financially.
An evening of professional wrestling featuring World Wrestling Entertainment Hall of Famer Ric Flair at MeadowView Conference Resort and Convention Center on Friday will have a portion of the gate re- ceipts donated to area Shriners officials, Tankersly said Tuesday.
“I just thought it was such a great thing that Savion was doing that I wanted to help him someway. Wrestling is what I do, and I know our fans are the best at helping people out, so we hope people will come out because it will help these kids,” Tankersly said.
Children who come to MeadowView on Friday between 3 and 5 p.m. with 15 or more pull tabs will receive a ticket good for free admission at the Shrine Circus coming to Freedom Hall in Johnson City in October.
For more information on Friday’s show, visit: www.jtsport events.com.
More information on the Shriners Hospital/Aluminum Can Pull Tab Drive is available at: www.shrinershq.org/Hospitals/ Springfield/Aluminum_Tab_ Collection.aspx.
Posted by douglassriverview at 10:27 AM