Pastor Ricardo Dorcean: Taking the "Central" Message to the Community

He is relatively young, by today's ministerial standards..

But 28-year-old Ricardo Dorcean is on a mission, and he's following in the footsteps of his elders.. that is, to continue leading followers of the Gospel to understand the true meaning of God's Word.

Reverend Dorcean has just ascended to the pastorship of the Central Baptist Church in Kingsport, Riverview-South Central's oldest church, and although he says he cannot predict the church's direction, his plans are to keep it wherever the Lord leads it.

The Haitian native sat down with the Douglass website, for his first interview, right after his very first sermon in Central's pulpit.

Click here to see a slideshow of the historic event.

"I am so excited about coming here," says Reverend Dorcean. "It's something that I feel God himself ordained, especially from the way it occurred. I am looking forward to whatever God wants me to do here." 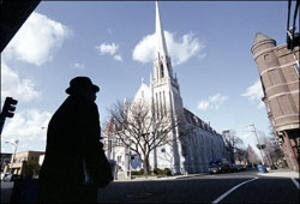 Born in Haiti, Ricardo Dorcean grew up and graduated high school on the tough streets of East Orange, New Jersey, outside Newark. He remembers those streets as being very straight-forward, in-your-face and strict.

"Where I was raised," he says, "it wasn't the popular thing to do, to read the Bible and lean on its teachings. Sometimes, I would even try to avoid it, because most classmates and friends just didn't believe it, or buy into it, and they would tease you a lot about it. But I always had a sense that the calling was there, that an inner voice was saying, 'trust in me, and I will give you peace.'

"I really got depressed," he says. "I felt under-appreciated for what I was going through. I even thought about just ending it all, because of the emptiness I was feeling, and my friends that I grew up with, weren't helping. I felt that I wasn't appreciated for who I was. But somewhere in the depths of despair, the Holy Ghost spoke to me CLEARLY, and said 'your time is not yet, there is work for you to do. I wasn't sure what that work was."

"The first thing I thought, was 'man, I can't believe that He's calling me to do this."

"What was strange to me," says Reverend Dorcean, "was, the more I tried to move away from it, the more I started hearing the message, and finally I just stopped resisting because for me, it was the right thing to do."


"And then, God started putting me in positions where I had to speak on his behalf, I had to minister to others," he says. "I had to speak God's Word to people. Everywhere I would turn, I was ministering to somebody. As time when on, the Lord was sharing with me what he needed me to do."

"You know I was raised in the church," he says, "and I would think 'Lord, I still can't believe that You're choosing me. It was overwhelming to be, being God's Servant in that fashion, handing that responsibility of speaking for God was, in a sense, exciting. It was fearful sometimes, too, with the emotions I went through."

Reverend Dorcean continued finding his faith and his calling at Virginia Union University in Richmond.

"When I was in school," Reverend Dorcean says, "I heard one of my professors, Dean John Kinney preach during class..he's the Dean of Theology there. During his teachings, he used all these words which I had never heard before. It immediately caught my eye and ear. But as he was preaching, he also gave you examples of what the words meant. I was fascinated by that, I was intrigued by what he was saying. Even though I had never heard the words before, the fact that he was explaining them as he was going along was just fascinating. You were able to understand everything he saying.. the most amazing thing I had ever heard."

After graduation, armed with a Bachelors degree (2003), and eventually a Master's degree in Divinity (2006), Reverend Dorcean found his plate full.

"At the St. James Baptist Church, Pastor Kevin Sykes spread my name around, really helped me out a lot. I was always preaching somewhere on Sunday. He really helped me get started. My parents had moved to Virginia, and I became very active in the ministerial spotlight in the area, since I already had my license to preach." 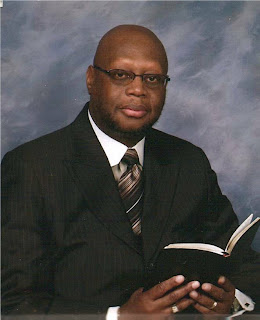 "Then, when I moved to Washington, D.C., I was introduced to Pastor Terry Streeter at the Mount Pleasant Baptist Church, and man, we just connected. From Day One, it seemed the Lord brought us together. I don't know why Pastor Streeter found favor with me, but he pushed me to the limits of what a minister is supposed to do..he also put my name around the D.C. area. I was only in D.C. for a couple of months, but it was a very busy couple of months, ministering and preaching quite a bit. He saw where I was going and realized I needed to be ordained. He doesn't ordain easily, but he must have seen something in me because he got the pastors together in Washington, we had a service and man, it was awesome. The Spirit of God was moving through that service, no hindrances, no blocks..the Holy Spirit guided us through the entire service. We all then just waited for the divine call."

"And then, I was called to Central."

Rev. Dorcean and his new wife Chaka just completed their move to Kingsport.

"I am expository, very demonstrative," he says. "I like to use life experiences, as lessons in faith. I'm very structured, and I have certain structures that I use when I'm preaching. If you have good structure, it helps the followers, the listeners, the Believers in the Word, to follow more succinctly. I love to follow the Word of God, to sense what he wants to say, even in the midst of the structure. I'm passionate, excitable and easy to follow, especially if your faith is wavering. Even today, I still make the sermon easy to understand, just like Dean Kinney in school. I want to invite people to learn and provide them vocabulary, then break that down into examples so they can understand the Word. It's an excellent teaching tool that Dean Kinney taught."

"Prayer is the basic key that unlocks the Doors to the Kingdom of Heaven," he says. "It's not just me speaking about him, it's also about Him speaking through his followers. The prayer line, the devotional, the meditation is so very important. Prayer is the Power Source, how you communicate to God and how he responds through the Holy Ghost. There's a story in the Bible where the disciples couldn't cast out the demon from a boy, even though they kept trying. And Jesus told them, they had not spent enough time in prayer and fasting. It's communication with God that strengthens you, and gives you to strength to cast out demons or whatever comes your way. If the church ever gets away from praying, I feel it automatically loses its power, in my opinion."

"If we don't do anything else, we have to maintain that lifeline of prayer in the church."

"Where we go, is dependent upon God leading us there," he says. "I will follow God's Plan, because upon this rock his church was built. We have wonderful ministries, particularly the Manna ministries..that is an amazing ministry the church does. Central Baptist has a devoted following, and one of the things they do best is be active in the community. Every community needs the church to be the beacon of light, the main support system that people can lean on. I automatically knew how connected these folks are to God, when, during the process of coming here, one church lady told me 'Reverend Dorcean, I think God's gonna get you here whether we like it or not, and then she smiled at me. That was a clear indication to me that this connection is not human, it's divine orchestration. I thank God for their faith and their inspiration to let Him work his will, calling me as Pastor."

"I feel that we will work well together," says Reverend Dorcean. "As God leads us, we will follow, and rally others around us. Continuing to meet the spiritual needs of people."

"I feel that is our calling."
Posted by douglassriverview at 12:36 AM