Community room will include the resident activity office, training facilities, and a Boys and Girls Club branch site.

KINGSPORT — The city of Kingsport is expanding the V.O. Dobbins Community Center renovation project by adding an 8,900-square-foot community area to the footprint of the facility. The cost of the addition will be $1 million.
The V.O. Dobbins Center is a city-owned community center located between Louis and Wheatley streets in Riverview. The building served as Kingsport’s “blacks only” school from 1951 to 1966 and was named Douglass High School.
Kingsport plans to renovate 46,000 square feet of the facility and initially add 50,000 square feet of new space including another gymnasium and a new 28,000-square-foot, three-story nonprofit wing.
Chris McCartt, assistant to the city manager, said work has begun on the $5.9 million project, adding he is confident the new V.O. Dobbins will be ready by July 2010, with the new community wing being open a month later.
“The parking lot for the nonprofit wing has been constructed and is being used as a lay-down yard,” McCartt said. “The nonprofit wing has the steel being put in place. They’ve begun to lay the block on the new educational wing and are in the process of doing the undercutting of the soil for the new gym and community c e n t e r. ”
McCartt recently came before the Board of Mayor and Aldermen and updated them on the proposed addition to the facility — an 8,900-square-foot community center to be located on the ball field side of the building between the two gymnasiums. 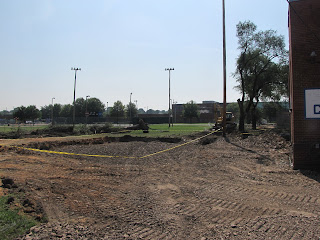 The new community room will contain the resident activity office, Riverview administration offices, community supportive services program, family selfsufficiency program, training facilities (computers, job training, room for speakers) and a Boys and Girls Club branch site.
Many of the offices from the Fresh Start building will be moved over to this new facility, then that building will house South Central Community Development Inc., the Weed and Seed and tax assistance programs.
“All of the housing authority complexes have some sort of community room and on-site office. That’s required at all housing projects,” McCartt said. “When the houses are built back in Riverview, they’re going to be required under the HOPE VI grant to have a community cent e r. ”
Since there is no room on the actual site of the new houses, McCartt said the city’s thinking was to put the new community room at V.O. Dobbins instead of tying up another property along Martin Luther King Jr. Drive.
The city and the Kingsport Housing and Redevelopment Authority own most of the property along MLK Drive, with the plan now being to sell some of those properties for private development.
“We looked at (putting the community room in V.O. Dobbins) early on to see if there was enough space to accommodate it. Ultimately, the decision was reached there wasn’t (enough space),” McCartt said. “At the same time we have to adhere to the HOPE VI grant, and the requirements set forth in it require a separate community center.
“By bringing them both together it is a win-win for everybody.”
The cost of the addition will be $1 million, which includes prep work and construction. McCartt said the architectural work for the addition is being rolled into the existing contract with Cain Rash West Architects at no additional cost.
Two years ago, the BMA approved a Section 108 loan for $1 million as part of the city’s commitment to the HOPE VI project. This is the money that will be used to fund the construction of the new addition and will be paid back with Community Development Block Grant funds over a 20-year period.
McCartt said paying the loan back with CDBG funds will not affect any of the city’s funding for community development partnerships, such as the Salvation Army and CASA.
Posted by douglassriverview at 12:43 PM